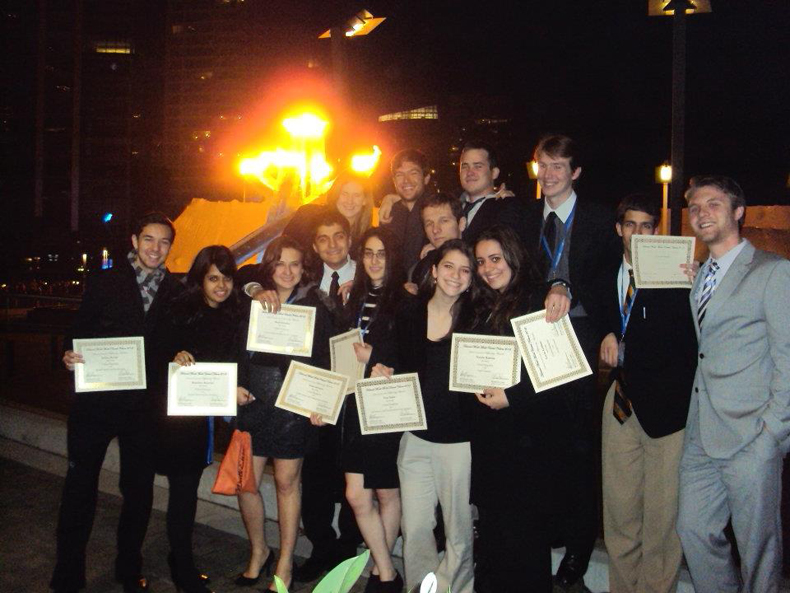 Each year, approximately 2,000 students from universities around the world gather together for the week-long World Model United Nations conference. Included among them this year were 14 students from the College of William and Mary’s International Relations Club.

Model UN is a series of conferences in which participants are assigned to represent countries, organizations or leaders in order to debate pressing international issues, such as outdated laws of war, sovereign debt and global management of water resources. This year, IR club stayed in North America, traveling to the host city of Vancouver, Canada.

The conference serves as a simulation of international organizations such as the United Nations and the World Health Organization, by means of committee debate. There are various committees; some resemble existing UN committees and focus on current events, while others are historical and debate issues of the past. The goal is for each committee to present a resolution for its issue by the end of the international conference.

With over 100 members, IR club is one of the biggest organizations on campus, but the team selected for the WMUN trip is the most competitive team of the club.

Since WMUN is the its most important and anticipated event each year, the IR club does much more than simply prepare for it.

“We bring in lots of speakers; and host two MUN conferences here every year,” Vice President for Model UN in the IR Club Anushree Banerjee ’12 said.

In order to succeed at WMUN, the entire club helps in researching the topics and fundraising. Meanwhile, the students on the competitive team have their work cut out for them in ensuring that they are well-versed in current issues specific to the committee they will represent.

“We prepare for five weeks, working ten hours a week to get ready for the world competition,” Banerjee said. “Honestly, the best Model UN delegates are people [who] are charismatic, confident and incredibly friendly. We pride ourselves as the team that makes the most friends at conferences, and I think that is the real key to our success.”

This year, most of the College’s team represented the United Kingdom, winning all five double delegations in which they participated. Repeating the success of last year’s competition team, 11 out of the College’s 14 participants walked away with awards.

“MUN is privy to some of the most interesting people you will ever meet, and IR club is such a fun and inclusive environment,” Jeff Rohde ’14 said.

Even so, the conference isn’t solely about the competition: numerous social events are held throughout the week. These range from sight-seeing trips through the host city to Global Village, where delegates bring food, music and traditions from their homes, and Cabaret, a global talent show.

“It’s truly an amazing experience,” Banerjee said. “You get to go to another country with your best friends, people who you’ve trained so hard with and gotten to know really well, and you get to meet people from all over the world.”

Aside from developing negotiation and leadership skills, WMUN also allows many to create friendships that extend across borders and beyond the conference, resulting in a better understanding and appreciation of other cultures and perspectives.

“On the one hand you get to meet people as interested in IR as yourself, but there’s also the aspect where, in general, the people are just really great,” Rohde said. “They are so funny and bold — it’s just a blast.”

While only 14 members of the IR club traveled to Vancouver, club members at the College showed strong support for the competitive team at the worldwide competition.

“We take it really seriously, a lot of preparation goes into WMUN and it is a huge time commitment,” Alison Roberts ’15 said. “I have such respect for the WMUN team and all the hard work they put into it — that’s what makes it so successful.”