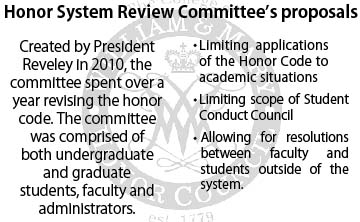 The Honor Code is one of the longest standing and most significant traditions at the College of William and Mary. Since its inception in 1779, the Code has seen numerous changes, alterations and additions to reflect the continually evolving interests of the College community — and it’s about to see more.

The President’s Honor System Review Committee published its findings and proposed changes last week in a draft report that, pending further review and the approval of College President Taylor Reveley, could mean major changes to the Honor Code as we know it.

At the center of the Committee’s inquiry was one question: Is the current Honor Code the best way of doing things? The answer, according to members of the HSRC, is no.

A large part of this misunderstanding has to do with ambiguities in the current code — and its length.

“The code is so complicated; I don’t think that many students ever read it,” HRSC Chair professor Clay Clemens ’80 said. “The current one is really hard to read. It’s almost as bad as our undergraduate course catalogue.”

The Code as it stands today was introduced in 1997 but most of its wording is leftover from previous versions dating back to the 40s and 50s, with newer additions added on top of the existing framework, Clemens said. In response, the committee isn’t suggesting editing the current Code, but actually starting afresh.

In addition to making the new system more efficient, the HSRC is proposing substantive revisions that will reach every corner of the College community.

Among the largest revisions is the limit applications of the Honor Code to academic settings for undergraduates. Under the current system, a student caught lying to his Resident Advisor could be cited for an honor violation and subject to the Honor Council’s full range of punishment — including expulsion.

While this may have made sense when the Code was first written, the creation of the undergraduate Student Conduct Council has produced an overlap in the reach of these two organizations, the HSRC says. The proposed Code will attempt to limit these redundancies by limiting its scope.

“That’s a pretty big change and that would be perceived as one of the biggest proposals in the entire report,” Student Assembly Finance Committee Chair and HRSC member Noah Kim ’13 said.

Other proposals include making an attempt to gain an unfair advantage — even if unsuccessful — a punishable infraction and clarifying what steps professors can take to prevent cheating without violating a student’s rights under the Code.

The committee has also suggested changes to the ways in which these infractions are settled. For example, under the new system, students and faculty would be able to resolve issues without going to the Honor Council, not unlike an out-of-court settlement.

Currently, any student found in violation of the Honor Code must go through an extensive investigation and review process before sanctions are issued, even after admitting guilt. The HSRC is proposing a way for students who plead guilty to go directly to this final step.

Reveley established the Honor System Review Committee in 2010, comprised of undergraduate and graduate students, faculty and administrators, with the purpose of reviewing and revising the existing Honor Code. Although deliberations were only originally planned to last only for a semester, the entire review process lasted over a year.

“The process took a little longer than we anticipated,” Clemens said. “We had an interesting year and a half.”

The main reason for the extension was the scope of the project.  For example, the committee reviewed honor codes from 30 other universities, as well as the Code’s importance. Although the HSRC has reached a consensus, the process wasn’t without its fair share of debate.

“You’re never going to have people entirely happy,” Dougherty said. “It’s a tough issue especially because the stakes are so high.”

The list of proposals is extensive and far-reaching, and the committee acknowledges that students, faculty and administrators may have some objections. This is why it has released its full 32-page report, along with a two page summary, on the College’s website, so that community members can review and comment on the report before it is sent to Reveley.

Committee members say they encourage students to read the report before making judgments.

“I hope students and faculty will at the very least read the [summary] before firing shots at the system,” Clemens said.

Kim stressed the importance of getting the community to believe in the system in which it lives.

“I think that a fundamental part of the honor system is dependent on the buy-in of members of the community, that we all feel invested and see the system as credible and legitimate and something that we’re all benefiting from,” he said.

The committee has a survey online that students can fill out at forms.wm.edu/4416.