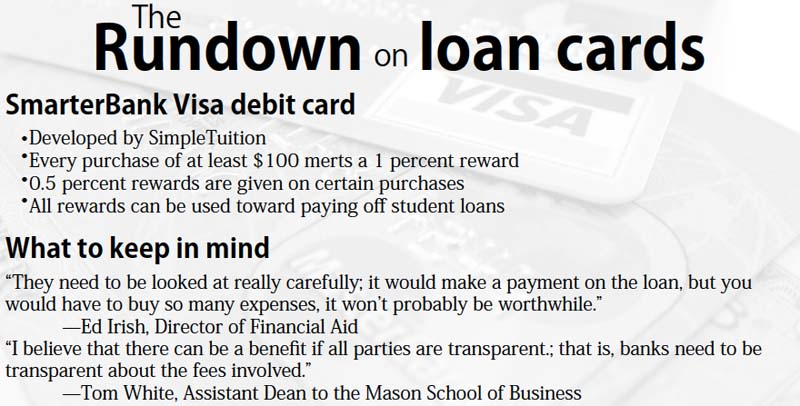 Faced with the reality that those who graduate with some degree of debt have become the majority, banks have begun pushing more offers to recent college graduates. Experts, however, are advising graduates to strap on goggles in order to become adept at reading the fine print before plunging into the murky waters of private lending.

The newest offer is the SmarterBank Visa debit card, with a reward program which supposedly would allow borrowers simultaneously to drink beer and to pay their student loans. Under the card’s rewards program, purchases of over $100 merit a 1 percent reward, while borrowers receive a 0.5 percent reward on other signature-based purchases.

The company behind the card, SimpleTuition, works as a loan comparison company. Its executives include former student loan lenders, according to the Wall Street Journal.

SimpleTuition’s offer is not unlike others from private lenders waiting to catch the eye of recent college graduates.

Almost immediately, economic experts began to strip the glossy shine from the deal, invoking images of a world of predator versus prey.

“I am leery of these bank plans in general. … Banks have a history of preying on students who go into financial arrangements without knowing the consequences,” Assistant Dean to the Mason School of Business Accounting Programs Tom White said. “They [students] are a prime customer market to use this kind of debit card plan.”

Profit incentives, not altruistic motives, are the driving forces behind the banking world, according to adjunct lecturer and accountant in the Mason School of Business James Carleton.

“[The banks] have a product, the debit card, that is very profitable, and because of the Frank Dodd bill, some will say that they are losing money on them,” Carleton said. “They have probably done studies and concluded that it advantages them in the long-run by attracting new accounts at a minimal cost. I don’t think they would be doing this for altruistic reasons. That’s just not the way business works. They’re not always going to take advantage of students, but they will make offers where they make money, and students get a little bit back too.”

Such motives make it necessary, according to loan lenders and accountants, for students to scrutinize deals.

“They need to be looked at really carefully; it would make a payment on the loan, but you would have to buy so many expenses, it won’t probably be worthwhile,” Director of Financial Aid at the College of William and Mary Ed Irish said.

White wondered whether even he, probably spending at a higher rate than most recent college graduates, would see any significant reward return under such a plan. Carleton agreed.

“It sounds like a great idea, but go back and look at a bank statement and you could probably count your larger purchases on one or two hands,” Carleton said.

Besides the large purchases necessary to see rewards, a second catch economists and accountants have pointed to is the fees. This card holds an ATM fee 0.60 cents higher than the average comparable fee, and also charges for statement copies and account reviews, for which most other banks do not charge.

“If students are doing enough of their research and homework to know all of the strings attached and are reading the fine print, and they need to weigh it with the fees that are going to charge you with the debit cards and credit cards,” Assistance Director of the Financial Aid Office Jennifer Meier said.

In some cases, other avenues for banking such as credit card or government options, may be the better way to go.

“There is no right answer,” Carleton said. “If you can manage your money, a credit card will much better off than a debit card. The advantage is that you have these legal rights with a credit card.”

While financial and loan professionals note that banks may not have college graduates’s best interests at heart, they are not completely ready to say that private lenders should throw in the towel.

“I’m not saying there are not some potential benefits … students just need to think about commitment of having to repay,” White said.

Some recommended that perhaps private lending would do better if transparency became the order of the day.

“I believe that there can be a benefit if all parties are transparent; that is, banks need to be transparent about the fees involved, and students and parents need to be aware of the risks and the small benefits that will probably only offset them a little bit,” White said.

Meier and Carleton both agreed that it also would not hurt to see lowered interest rates for students.

Others were hesitant to say that the government should cast too wide a safety net for loan lenders, such as Sen. Durbin’s, D-Ill., recent proposal that would erase loans for borrowers who declare bankruptcy.

“From my perspective, anyone who enters a loan agrees to pay it. They are borrowing from everyone else in the country,” Carleton said. “You have a legal and some would say a moral, obligation to pay that loan. Somebody gets in really bad shape, declares bankruptcy, and by law you are clear, and that’s the way the world works, but that bankruptcy-filing will follow you for the rest of life.”

In the end, accountants and financial aid educators agreed that staying educated about financial aid options and how deep one’s personal pocket goes is the best way to erase debt.

“We do counseling sessions for seniors who are about to graduate, teaching them about how to contact loan services,” Meier said. “We also have a student loan repayment webpage, and we try to push the government links as much as we possibly can … we want students to know the government services that are out there.”

Even though the median cumulative debt among graduating bachelor’s degree recipients at four-year undergraduate schools was $19,999 from 2007 to 2008, according to the National Postsecondary Aid study conducted by the U.S. Department of Education, the College has comparably higher student repayment rates than other state universities.

Irish believes this has something to do with the College itself.

“Students are doing a superlative job at repaying their loans,” Irish said. “If people are happy with their end product—their college experience, then they are much more likely to repay their loan.”

Yet with 66 percent of graduates across the nation leaving college with some kind of debt and college costs continuing to rise, the issue does not seem to be going anywhere.

“It is a very serious financial issue for a family unit … I think cost is becoming an issue even for those who are independently wealthy,” White said.