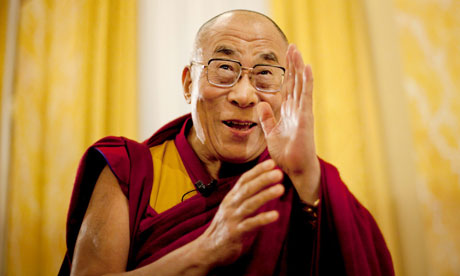 William and Mary Hall will be filled this fall with words from one of the world’s most prominent spiritual leaders and continual advocates of nonviolence, His Holiness Tenzin Gyato the 14th Dalai Lama.

The Dalai Lama plans to speak on the virtues of human compassion at the College of William and Mary October 10.

“The student response and the response within the school community so far has just been so heartening,” Student Assembly President Curt Mills ’13 said. “Hopefully what His Holiness says will spur campus and classroom discussion and will serve as a nice coming together moment for the Tribe.”

The Dalai Lama, winner of the 1989 Nobel Peace Prize for his work advocating for nonviolence in the movement to free Tibet from China, brings a message of peace, universal compassion and religious tolerance with him in his many speeches and visits around the world. President George Bush presented him with a Congressional Gold Medal in 2007 for his human rights work.

The Student Assembly, the International Relations Club and Alma Mater Productions collaborated funds and resources to host this student-led event. Of an estimated cost of $44,000 for the event, the SA committed $30,000, with additional financial support from the IR Club and AMP.

“They both offered to help offset some of the financial burden,” Mills said. “We got both the IRC and AMP involved because they seemed like natural partners for the event.”

The price tag only includes the cost of hosting the event.

“The Dalai Lama is not charging the school any money,” Mills said. “We are not being charged a speaking fee; we are merely paying the price of lodging, travel, security, and setting up Kaplan.”

After a presentation by a representative of the Dalai Lama spurred student interest, the SA began exploring hosting the Dalai Lama. A SA Senate bill and collaboration with AMP and the IR Club secured funding for the visit.

“Once we had the funds, President Reveley could send a letter formally inviting him,” Student Assembly Vice President Melanie Levine ’13 said. “It all sort of worked out because he is making four stops in the U.S. at that time.”

His visit is a part of a larger tour of the northeast United States. Other stops include a visit to the city of Charlottesville, Middlebury College in Vermont, Western Connecticut State University, and a three-day visit to Cambridge, Mass., which includes two events sponsored by the Massachusetts Institute of Technology.

“Getting the Dalai Lama to campus has been a student initiative,” College of William and Mary President Taylor Reveley said. “This is the sort of thing our intellectually curious, serious engaged students do at William and Mary. Bringing influential speakers to campus, representing a great range of perspectives is a tradition at the College.”

“It’s a little intimidating because 10,000 is a larger number than the student body, but I think that people in Williamsburg, students, faculty, and alumni will come,” Mills said. “We will have a full-on firing campaign and viral campaign, and we will be reaching out to alumni and the Williamsburg community as well.”

The Student Assembly, AMP and the IR Club will be working to prepare for the visit over the next two months. Details about the event, ticket prices and availability are forthcoming. Students will not be charged for tickets, but ticket prices for non-students are currently undetermined.

“I think that bringing a spiritual leader to campus is something that happens very rarely, and I hope that it sets [a] precedent for bringing a wider variety of speakers to campus in the future,” Levine said.