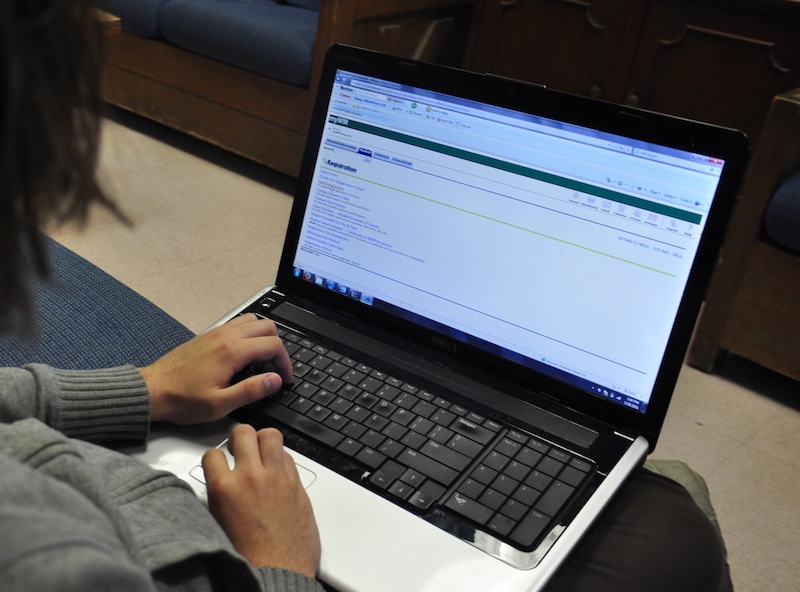 Most students would label a Facebook relationship between themselves and the College wireless network as “it’s complicated.”

The relationship is at its rockiest during the first few days of every fall semester.

“Today, a professor told me that I needed a good internet connection to take a quiz online, but I don’t know a place on campus where the internet is always reliable,” Alison Roberts ’15 said.

This year, Information Technology says the blame lies with an influx of iPads, iPods, Xboxes, and smart phones.

“Each year, more and more students come back with more and more devices,” Network Manager Scott Fenstermacher said. “The number of broadcasts when the students came back was more than we thought.”

Wireless devices send out signals to alert other devices to their position. Network traffic coming from more broadcasting devices this year has caused the networks to congest.

“This year it has been a traffic issue,” Norman Elton, a network engineer for the IT department, said. “There was more traffic than the access points could handle. The big offender was [that] a language Apple uses, iTunes home sharing, was so chatty that it overwhelmed the wireless, so we turned it off last Thursday. We are hoping the big problems are controlled, but there is more work to be done. Turning [home sharing] off is a band-aid fix. Later on in the semester, we will rearrange the network for a more permanent fix.”

IT has diminished network areas to reduce chatter.

“This year, the networks were broadcasting a lot of information over a large area,” Fenstermacher said. “The problem could come back. We are going to redesign the network in smaller areas. We have turned off broadcast areas so they are not as large.”

Even though the change was necessary, this may lead to frustration for some more dedicated Xbox players, according to Fenstermacher.

“Some of the heavy Xboxers may get a little frustrated that they can’t see other players around them,” Fenstermacher said. “But it was what had to be done.”

Other students were frustrated about slower speeds for other entertainment purposes.

“The Ethernet box in my room is broken and because I’m in the basement, the internet hardly ever works properly,” Emily Parrish ’15 said. “I can’t get on Netflix to watch Law and Order.”

While the problem has routinely appeared each year, IT officials say the changing nature of network usage makes it difficult to predict problems. A bug in the code of new access points around campus last year resulted in problems for students as well.

IT has been working on a solution, but Elton reminded students that their input to IT is most helpful in these situations.

“The biggest thing students can do is tell us. If there is a problem, we need to know in order to be able to fix it,” Elton said.