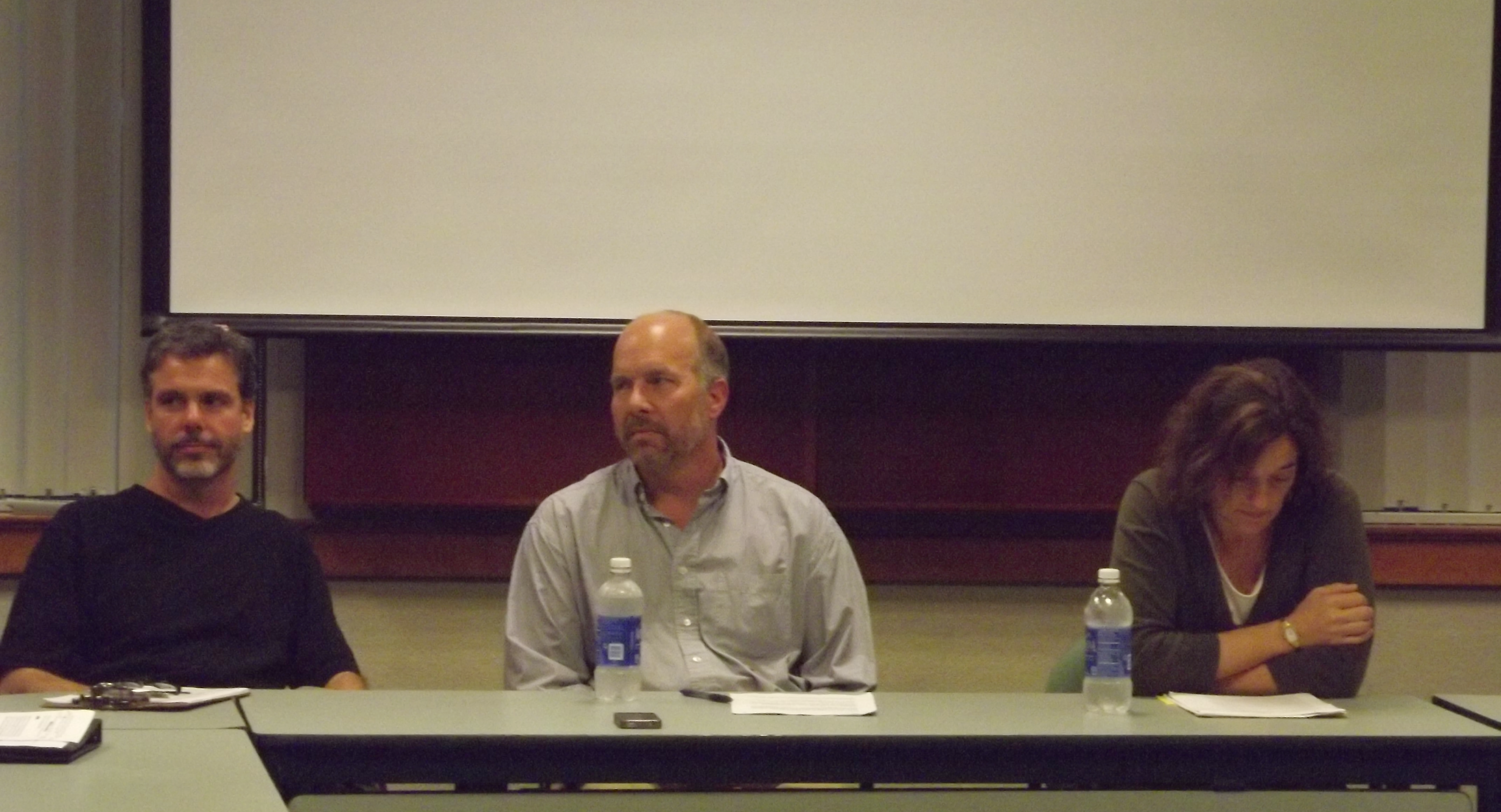 Peter Bauer has been a minister his whole adult life, but after closely reading the Bible, he does not want to be an Evangelical anymore.

Evangelicalism, the tradition of working to convert non-Christians, draws criticism from non-Christians and Christians alike. To explain the reasons behind this, Susan Wise Bauer, Gregory D. Smith, and Peter Bauer held an open discussion on the evangelical movement in American Christianity, entitled Why I Am (Not) Evangelical.

The three speakers — a historian, a scientist and a minister — have ties to evangelicalism, whether in upbringing or otherwise, yet they presented personal reasons for distancing themselves from the evangelical side of Christianity. Each of the speakers took 20 minutes to present an argument against elements of evangelicalism, and then the floor was opened for a question-and-answer session with the audience.

The term “evangelical” immediately evokes strong opinions from some people.

“I personally feel that sharing your views with others is selfish and sort of egotistical, and sort of makes it seem like your views are better than their views,” Capwell Taylor ’16 said. “As far as missionary work is concerned, I believe helping people is great, but they don’t need bibles, they need food and water.”

Wise Bauer, the first speaker of the evening, addressed these exact opinions. Wise Bauer was raised in an evangelical household and attended Liberty University, a Christian university. Wise Bauer now works in the English department at the College of William and Mary and is an author and historian.

“The primary reason I don’t want to be an evangelical is the loathing, disgust, and invective that gets directed at me when people find out that I’m an evangelical,” she said.

For example, when Wise Bauer published books concerning the history of the world, she found that after her readers discovered her evangelical background, they viewed biblical references in her books as conversion efforts.

“In this context, every use that I make of a Christian source takes on an ominous quality, [with] the assumption that I have an unspoken agenda,” Wise Bauer said.

Wise Bauer does not support the conversion efforts of evangelicals.  She said she views conversion as God’s job, not her own.

“The method of evangelizing that came to characterize 20th century evangelism was that if you [do] everything right, people will convert … [and that] the more people you convert, the better,” Wise Bauer said. “There are two things wrong with this.  Number one is that it’s manipulative, and number two is that it’s impersonal.”

Smith is a professor of applied science at the College, and he was raised in a “secular, humanist, atheist” household.  Smith converted to Christianity during his college years, but he still holds onto scientific beliefs.

“I’m uncomfortable with the label evangelical because I’m not conservative, and I’m not afraid of science, and I’m not prone to let other people think for me,” Smith said.

Smith identifies himself as an “evolutionary creationist.”

“I pretty much think the scientific world view is correct on origins and broad strokes,” Smith said. “It’s the interpretation of these events that changed after I became a Christian.”

Smith chooses to separate himself from evangelicalism because of the evangelical view of how faith and science intersect. He would rather stay true to his scientific background.

“It was extremely troubling to me that everyone who I talked to who wasn’t a scientist in the church had really crazy ideas about the way faith and science go together,” he said.

The last speaker was Bauer, senior minister of Peace Hill Christian Fellowship. Bauer was also raised as an evangelical and went into the Presbyterian ministry, yet he takes issue with the cultural aspects of evangelicalism. He was able to provide background on what it meant to grow up in an evangelical household.

“I was brought up in a defensive position, to argue my faith,” Bauer said. “I was brought up with the understanding that my job was to argue with other people about what I believed and to convince them through knowing enough, saying just the right thing [and] presenting in a certain way. I was raised with a view of life that good people do good things, and everything turns out right for them, and that this was a system of life that God smiled upon. If somebody had problems or difficulties in their life, it was because they had done something wrong, and they had made some sort of moral mistake that they were punished for. I was raised with the idea that scripture was inerrant and that there must be no mistakes.”

Bauer’s views changed drastically after reading the bible closely and finding that it did not support the things he was raised to believe.

Bauer also explained that the tendency of people to view America as the “kingdom of God” bothered him. He saw people trying to transpose scripture onto modern life as an atrocity against the ancient text.

The three speakers expressed hope for change within the church, but also realistic expectations about the future.

“So I’m willing to let go of the word ‘evangelical,’” Wise Bauer said. “I’d like to recapture the word Christian — that would be useful — but I’m afraid that in the U.S., those two words have become synonymous in too many contexts for that to happen.”