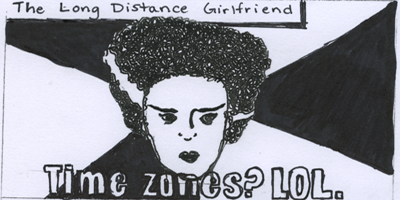 Long distance relationships turn fairly normal, well-adjusted people into jealous, bitter assholes. I’m not kidding.  When my boyfriend first moved across the country, I spent at least a good month being mad at everything. Everything sucked. Everyone sucked. God forbid you were happy within a ten-foot radius of me; I was not going to participate in your happiness. No kissing on the street. No holding hands in public. Stop looking at each other like that. And wouldn’t you know, in the first week he was gone, I knew at least eight couples who got engaged. “It’s not fair,” I cried, literally in tears.

Additionally, anything that was the least bit stressful was compounded a thousand times by the fact that I was now a continent away from my man. Taking my GRE? Stressful. Adjusting to school life? Stressful. Went to happy hour and got charged $8.50 for my margarita that was supposed to be five bucks? Freaking stressful! Insert more crying here. I found it physically painful to be around people who even looked like they could be in love. Having roommates with practically live-in boyfriends was torturous because when I came home I had to watch them do things I wished I were doing with my boyfriend. You know, normal stuff like cooking, cuddling and even arguing about who is going to do the dishes.

And this doesn’t begin to cover the lack of intimacy. After two months without hand holding, kissing or being naked with another human, brushing my arm against someone else’s is enough to make me catch my breath. I start to overanalyze the arm brush. I think about his intention, about my intention, about his interpretation of my intention. Last week, I was sitting in Lodge One, and this sleazy frat boy came up and rubbed my shoulder. I did not tell him not to touch me. I did not give him dirty looks. I sighed. Like a lusty teenager. This is not funny, people. I don’t ever want to be so unknowingly desperate for physical contact that sleazy men elicit unintentional sighs.

All of a sudden, I’m jealous of everything in my significant other’s life. Not just everyone,  but everything. I’m jealous of all the people in his life who get to see him every day. I’m jealous of the bartender who serves him his drinks. I’m starting to feel like the over-attached girlfriend Internet meme: “Let’s leave Skype on, so we can watch each other sleep.” That seems like a reasonable idea to me. There is something terribly wrong here.

People think it would be cool to have a relationship that didn’t require their constant attention. Like, if their girlfriends didn’t go here, they’d get to have poker night whenever they wanted and wouldn’t be obligated to see crappy chick flicks on Friday night. It’s fine in theory, but in actuality when you’re at that poker game you so desperately want, you’re thinking about how you wish your girl were there. You want it so badly that you mentally trade that straight flush in your hand for a few hours at that crappy movie, just so you could put your arm around her.

And I swear, long distance has to be the only thing in the world that doesn’t get easier with time. Because the longer you’re with someone, the more you grow to like them — hopefully, you know, in a long-term relationship — and the harder it is to be away from them. People take some things for granted, like being in the same time zone. The three-hour time difference seems innocent enough, but there is never a good time to talk. When I’m waking up, he’s three hours from his alarm going off. When I get out of class he has just gotten to work. When I am getting home from all of my meetings, about to sit down and hit the books, he’s about to get on the bus home. His day is over after I am already asleep. It makes talking about normal everyday things nearly impossible, and when you stop talking about normal everyday details, you’re not left with much to talk about.

But all hope is not lost, my fellow long-distancers. There are ways to work around the time difference; it just takes a lot of scheduling. I’ve started writing letters full of pretty mundane daily details that he and I may not get a chance to talk about every day but that provide context and definition for my day-to-day life. Text messages can connect people even when there isn’t much time to talk, and they can be full of sweet nothings, endearing pet names and dirty talk. And in my experience, “getting reacquainted” sex is some of the best there is.

Tyna H. is a Behind Closed Doors columnist and she does not encourage sleazy frat boys to give shoulder massages to strangers.