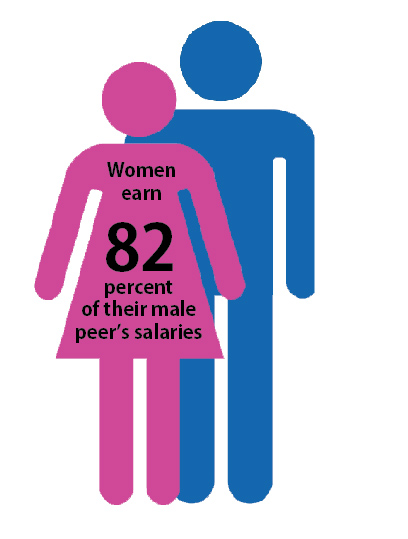 On average, female college graduates earn 18 percent less than their male counterparts after graduation. This figure, determined by the American Association of University Women,  exists in spite of the fact that women average better grades and higher graduation rates in college

The AAUW’s survey attempts to control for certain factors, including school selectivity, college major preferences, grades and employment sectors, to ensure objectivity. AAUW researchers found nothing to explain the remaining 7-percent pay gap that appears despite these controls.

“The results are sobering indeed,” associate professor of geology and faculty director of Academic Advising Rowan Lockwood said. “Even when the authors accounted for college major, occupation, hours worked, and employment sector, a 7-percent pay gap still exists. This suggests that, whether we’d like to admit it or not, gender discrimination still plays a role in the American workplace.”

to an imbalance of critical information regarding salaries.

“Men have historically been in the in-crowd,” DiBella said. “They have access to better information about what salaries one gets in a certain position. I don’t think [that] women are made as aware about what you can demand. They don’t have access to the same information.”

“[Pay inequality] is something that needs to be recognized and addressed more,” Mari Cooper ’14 said. “I don’t think that you can promote equality in the country without also demonstrating it.”

Lucas Leblanc ’15 also expressed dismay over the findings, suggesting that the problem is unresolvable.

“I think it’s a reality and nothing can be done about it,” Leblanc said. “It’s terrible that I have an advantage based on being a guy.”

Professor of economics Peter McHenry argued against blaming sexism for the pay gap, seeing the excuse as an oversimplification of a multi-faceted issue.

“I do not think the American workforce culture is dominated by sexism, although there probably exists discrimination against women in some places,” McHenry said. “When comparing average pay of men and women, there are always potential explanations for a gap that do not rely on discrimination. Men with the same college major and occupation [as women] tend to work more hours. It’s possible that employers discriminate against women by not allowing them to work as many hours as men, but more of the difference is probably associated with workers’ preferences.”

DiBella agreed, discounting widespread,blatant discrimination as an explanation for the pay gap. Instead, DiBella cited gender norms regarding assertiveness in pay negotiations as the reason for the discrepancy.

“If a company can get away with paying someone less, then they generally will, regardless of the person’s gender,” DiBella said. “Generally speaking, men are less restrained when it comes to negotiating and bargaining. I also see men paid less than other men [due to lack of negotiating skills]. There is an issue of gender, but there are other issues that transcend the gender issue.”

Career Center Director Mary Schilling agreed that sexism is not responsible for the pay gap, citing choice of undergraduate major as a more likely culprit.

“Women may choose majors that are less technical, where the supply and demand [for jobs] is different,” Schilling said. “Majors matter. A pay gap may happen later on, if women don’t show as much assertiveness in securing promotions, but, at the starting level, I’m quite sure there’s equal pay.”

The AAUW study found that men are more likely to adopt technical majors like computer science and engineering, while women gravitate towards education and social services. However, it also recorded a pay gap between women and men with the same majors and jobs.

Schilling asserted that women at the College should not be discouraged by the study’s findings. She explained that the Career Center links students with entry-level jobs without gender pay gaps.

“[Do not make] the assumption that there is a pay gap at the entry level,” Schilling said. “The employers who come to the College to interview students for jobs do not build in a gender pay gap. An entry position is an entry level position.”

President and Founder of the William and Mary Women in Business organization at the Mason School of Business April Kane ’13 praised the College for preparing all students for the workforce.

“The Mason School of Business, the Cohen Career Center and William and Mary as a whole provide students with unparalleled preparation to be revolutionaries and leaders in whatever they may do,” Kane said. “Women in Business and similar organizations at the College are outlets for undergraduates to be empowered and gain the tools they need to achieve great things.”

“I remain optimistic that a combination of education and legislation can make a difference,” Lockwood said. “Non-profit organizations like the AAUW could publish salary equity rankings for public institutions, so that potential employees and investors could assess progress. Private industry, especially organizations that pride themselves of promoting women in the workforce, might even choose to participate, which could help spread the word. There are so many possibilities.”

“While there could be benefits from more [income] transparency, the costs might outweigh them,” McHenry said. “An employer who must publish pay levels or ranges would be reluctant to give a substantial pay raise to an extraordinary worker, women included. That would dampen incentives to work hard and reduce potential for higher pay. I think existing legislation does a pretty good job reducing discrimination: it’s certainly not overt like it used to be. New legislation trying to reduce the gender pay gap might hurt workers, including women.”

He acknowledged the existence of sexism in the workplace, but encouraged female students to strive for opportunities regardless.

“There are many career opportunities for bright, talented graduates of colleges like William and Mary, both men and women,” McHenry said. “There is some discrimination against women in the labor market, but there are laws to combat it, and plenty of opportunities remain despite it.”

Kane encouraged women preparing to graduate to not see the pay gap as on overwhelming obstacle to success.

“Always put your best foot forward and be professional in the workplace,” Kane said. “Go above and beyond your career title and seek ways to add further value to your workplace. Stay positive, and stick to those Tribe values that we all know and love.”

“Anyone in a tight jobs market needs to have the capacity to bargain and negotiate for salaries,” DiBella said. “In a bad jobs market, people feel lucky to be even offered a job. With that sort of mindset, you’re not going to demand as much salary as you should. Women and men selling their labor and time must recognize that they have options.”

Lockwood urged women to approach their careers with confidence and drive.

“Don’t doubt yourself,” Lockwood said. “Life is too short. It’s important to keep telling yourself that you are smart enough and can do anything that you put your mind to.”