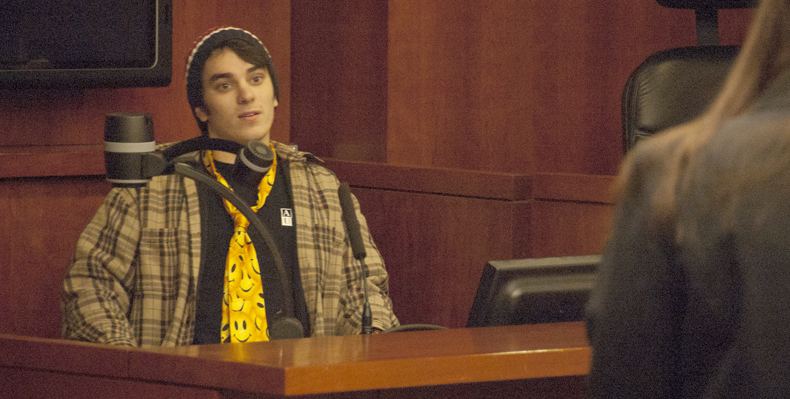 Sitting at the head of the court, the judge began introducing each side of the case to the jury. After naming the plaintiff, he paused and sighed.

“Your highness, if you would please not wave to your many admirers.”

Prince Charming put his arm down but couldn’t resist flashing another quick smile at the fifth and sixth graders who made up the jury.

Students from Providence Classical School attended “A Fractured Fairy Tale” Nov. 14, a faux trial between Charming, played by Nandor King J.D. ’15, and businessman Don Pieman, played by Dominic Littman J.D. ’13. The event was hosted by a public service organization at the Marshall-Wythe School of Law, the Center for Legal and Court Technology.

“Today we’re going to tell you the truth, and we’re going to try to make you laugh,” Fred Lederer, chancellor professor of law, CLCT director and the trial’s judge, said. “We want this to be entertaining, we’ll see how well we do.”

The story behind the trial was created by a number of members of CLCT, although Lederer was largely responsible for the event’s organization. This was the second fairy tale trial production this month, and a third production is planned for the spring semester.

According to Dalton, Lederer’s hope for the event was to engage the community with the law school. When addressing the children before the trial, Lederer emphasized how he and the others involved in the case were trying to educate the kids and teach them how the law really works.

“Much of what’s on television about the legal system is all wrong,” Lederer said.

With equal goals of informing and entertaining, many aspects of the trial provoked giggles from the children watching, and the case itself did not necessarily have a right or wrong side.

It all started when Charming woke up one morning covered in hair.

“And I thought I looked good before,” Charming said.

It was thick, golden hair, and it covered him from head to toe. He was, as those on trial testified, positively beastly.

“Prince Charming was the prince who had it all,” Melanie Fradette J.D. ’13, Charming’s attorney, said. “The perfect royal fiance, happy parents, an upcoming contract for a crystal ball show, and something that made him a social lion of all the kingdoms. Something no other prince anywhere had: he was a beast. We are here today because the defendant took that away from him, making his worst nightmares come true.”

After drinking water polluted by potions from Pieman’s Gargantuan National Manufacturing Corporation, all of Charming’s fur fell off. He lost everything, bemoaning the worst of his losses in a tweet on the social networking site Mocking Jay: “Undone by Catherine; dropped because I’m no longer a social lion.”

That was when he decided to bring Pieman to court.

Lederer began the trial by emphasizing the fact that although a member of the royal family was part of the case, they were not to treat him any differently.

“In this court, and in this kingdom, all men and women are equal before the law,” Lederer said. “Therefore, he is not entitled to any special treatment here. He is to be treated like everyone else, and although it may be customary elsewhere in the kingdom, you will not stand and bow when he takes the stand if he chooses to testify, as I believe he will, and you will evaluate his testimony the same as you would any other normal person. That is true for anyone else who testifies, even if they, too, are royalty. This is very important: All people are equal under law.”

While the entirety of the trial was accurate, slight adjustments were made to adapt to the case’s imaginary style. Every time a witness took the stand, they had to swear to tell the simulated truth and to be as entertaining and brief as possible.

The first witness brought to the stand was Rapunzel, played by Amanda Hamm J.D. ’15. After overhearing Pieman talking to his employee Rumpelstiltskin, played by Greg Marinelli ’12, J.D. ’15, Rapunzel posted the entire conversation on the social networking site FaceScroll.

Pieman ordered Rumpelstiltskin to dump specifically colored tanks into the river, unaware that he was colorblind. It was unclear whether the wrong tank had been dumped, thus polluting the water. Rumpelstiltskin said he was working a triple shift and operating on lack of sleep supplemented by the energy drink Grimmbulls.

Pieman claimed the long hours were necessary because there was a lot going on at the factory and all the animals needed to be fed.

“And everyone knows, Griffins eat people when they get cranky,” Pieman said.

Three juries were assigned to the case, the first two made up of children, the third reserved for the adults watching. It’s a testament to the ambiguity of guilt surrounding the case that every single jury was split in its decision. The first was a hung jury, the second leaned slightly in Charming’s favor, while the third leaned heavily in favor of Pieman.

The children paid careful attention throughout the entirety of the trial and left still talking about the different characters involved. Many had grown especially excited when Charming took the stand, and one of his frequently repeated line garnered giggles from the audience.