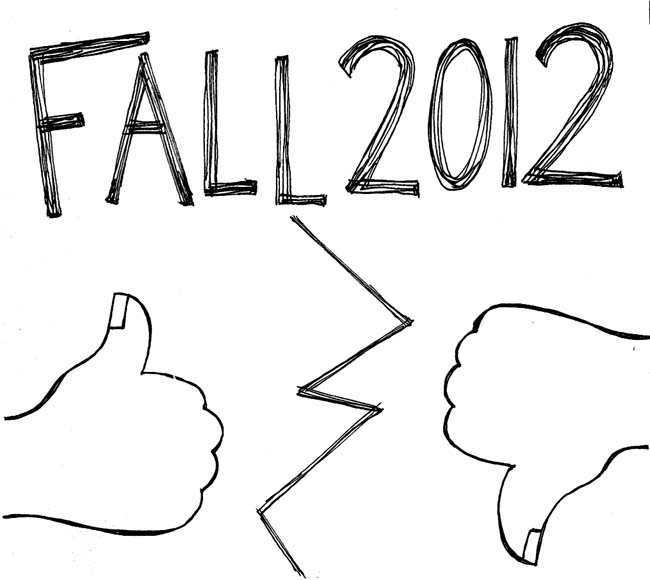 As the semester winds down, students are anxiously awaiting the appearance of College of William and Mary President Taylor Reveley in a Santa suit, hopefully with a bag of money — feet not included. We want to take a moment to look back on the highs (the College’s ranking as the No. 1 university for Harry Potter fans) and the lows (dorm mold) of Fall 2012.

First, we want to offer a thumbs-up to the infamous Laura Flippin ’92 for her decision to resign from the College Board of Visitors. Her decision to remove herself from the spotlight that comes with being a member of the BOV showed that Flippin in fact is capable of admitting her mistakes and living with the consequences.

Another thumbs-up goes to the Athletics Department for the proactive steps taken to improve campus safety in light of the Penn State University scandal and the Free Report. We are proud to say we attend to a school dedicated to the highest ethical standards.

Thumbs-down goes to the Student Assembly for its decision to use funding to buy koozies. The school doesn’t have enough money to solve the mold problem on campus, but the SA has money to spend on drink holders. Maybe we are alone in this line of thinking, but we would rather risk cold hands from holding cold drinks than health complications from living in moldy buildings.

This is not to say the SA has nothing to be proud of this semester. The SA deserves an enormous thumbs-up for bringing the Dalai Lama to campus. Not only was it a once-in-a-lifetime experience for students, but the College also made national news by hosting such an impressive speaker.

A thumbs-down goes to the Emergency Management Team for the way it handled campus preparations for Hurricane Sandy. Students were encouraged to stay in dorms despite the likelihood of flooding and power outages, and the decision to reopen campus on Tuesday morning forced many students to choose between missing class or driving back to campus during the worst part of the storm.

We give a thumbs-down to the Office of Student Diversity’s political Election Day tweet. We understand the tweet was a mistake, but the bigger problem was that nothing was done to fix the error.

Lastly, we want to extend a thumbs-up to the creators of Tribe Rides. SA and Health Outreach Peer Educators are providing means to help solve an issue with mental health care on campus. We hope more students come forward with creative ideas that benefit the College.

Congratulations on surviving another semester — even if there was that close call with the stapler. In 2013, the College will celebrate its 320th birthday. With curriculum reform and changes in funding, the future of the College is in the hands of its faculty, directors and, most importantly, its students. We hope students at the College will become even more involved both at the College and in Williamsburg.