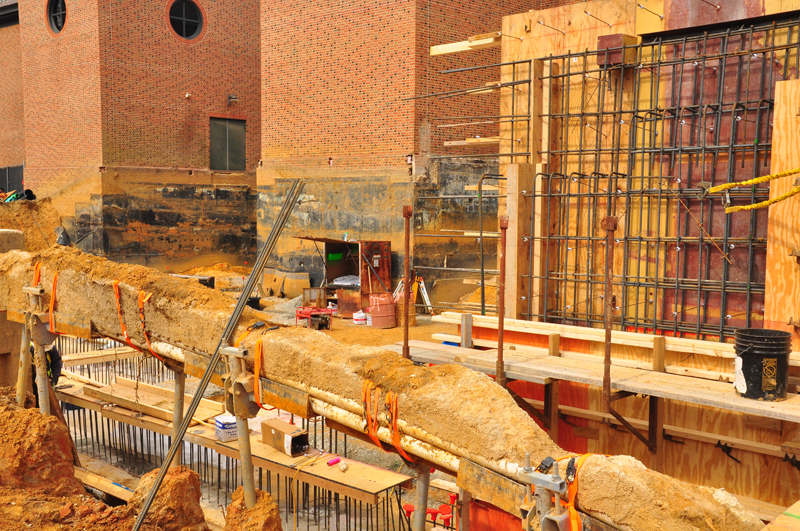 While the plans for the Sadler Center addition have been in the works for some time, set up and construction  did not begin until  January.

The construction team, led by Jurgen Korb, has been working on the early stages of the expansion project. Behind the stretch of green fence between the Sadler Center and the lodges is a large hole, completely dug out to make room for the addition.

The expansion project, adding 300 seats to the Sadler Dining area, will also house a new area for late night eating after the dining hall is closed. This area will replace what is now a lounge area with a large television in the main Sadler Center foyer.

Within the confines of the current Sadler Dining area, new stations will help organize queues and keep waits to a minimum. Dining also plans to completely replace every piece of kitchen equipment with brand new appliances.

At this stage of construction, the construction crews are beginning to build the steel framing. This will later be filled with concrete to create the outermost walls of the new addition.

Crews will continue to construct the walls and floors until it reaches the existing Sadler Center. In May, after graduation, the construction crews will break the outer skin of Sadler. Currently, the College hopes to complete the addition by the start of the 2013-14 academic year.

While the rain at the beginning of the semester affected some of the construction, Korb put down gravel stones to help  keep the water out and give the construction crews harder ground to work on. This will provide a base to lay down concrete which will form the platform for the second floor where the new seats will be added.