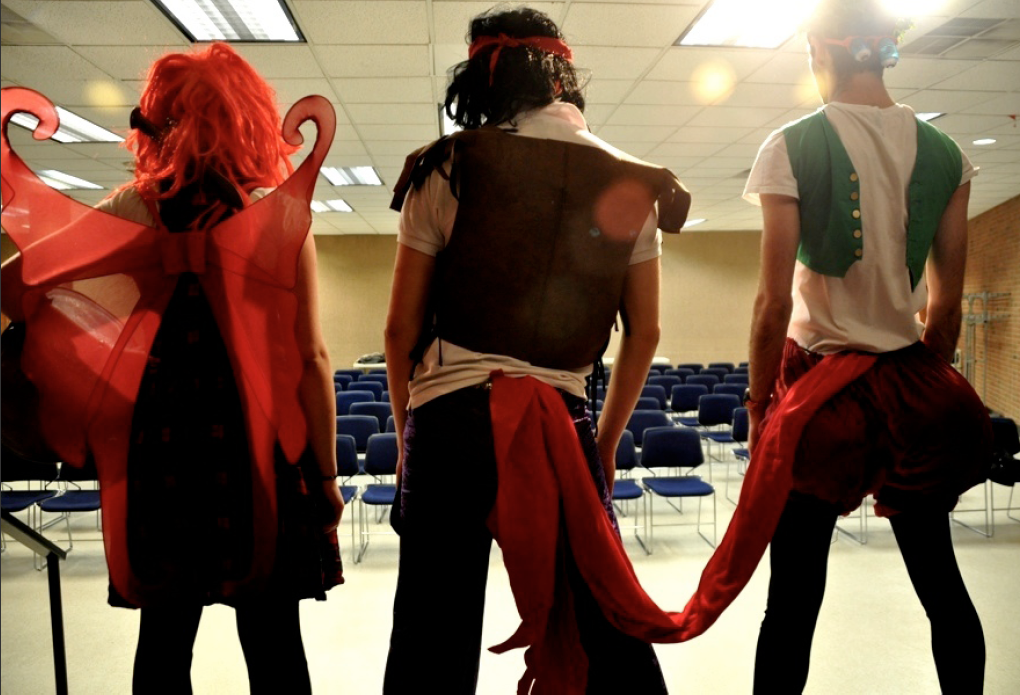 The elements all seem to be there. The actors wear tights, they speak mostly the Bard’s carefully crafted dialogue, and words like ‘doth,’ ‘therefore’ and ‘thou’ spring from their lips, but something is amiss. Suddenly, a profane ‘yo mamma’ joke is told, an audience member is harassed, and an expletive-filled rap about Othello begins. If anything can be garnered from “The Complete Works of William Shakespeare (Abridged),” it’s the fact that this isn’t the same  Shakespeare that your grandfather read.

The show, produced by Shakespeare in the Dark and written by Adam Long, Daniel Singer and Jess Winfield, makes a bold proposition to the audience. In the play’s duration, three actors act out every single Shakespeare play, a self-proclaimed feat that has never before been attempted. Needless to say, they fail miserably, thus lending the parenthetical afterthought “abridged” to its title.

The actors themselves, Maddy Benjamin ’14, Nathan Sivak ’13 and Aidan Smith ’16, seem game for any amount of irreverence and often find themselves waging humorous personal battles against political correctness. For example, at one point in the play, Sivak and Benjamin contemplate to exhaustive lengths whether it is tolerable for a white male to play Othello instead of, as the Bard pictured him, a street-smart black man.

It’s moments like these that the play’s director, Ricky Portner ’14, particularly enjoys.

“What I really like about it is that it’s somewhere between a scripted show but mixes in quite a bit of improvised pieces,” he said.

Improvisation, it seems, is definitely one of the major strengths the play has going for it. The three actors are all members of William and Mary’s Improvisational Theater team. Although their academic years differ, they have a professional history with each other.

“One of the wonderful things about IT is that you have to learn to anticipate their performance style,” Benjamin said, referring to her thespian colleagues. “Already knowing them makes me more comfortable doing this show that’s already kooky and out there, but we’ve got each other to fall back on.”

The exact amount of improvisation, however, differs depending on who you ask.

“All of the Shakespeare dialogue is Shakespeare,” Benjamin said. “The rest of it is guidelines. We know where the scene has to go, we’ve rehearsed a couple jokes, but how it gets there is up to how we’re feeling at the moment.”

In fact, the production team was quick to emphasize just how different each show will be for the audience.

“Most of the dialogue is script as road-map,” Benjamin explained. “And we find our way along that as we see fit.”

In fact, the show’s spontaneity seems to fuel the process for the assembled cast and crew. “It allows the actors to literally live in the moment of the show,” Portner said. Indeed, the cast seems most at ease when riffing with each other.

“With people at my disposal like Aidan Smith, Maddy Benjamin, and Nathan Sivak,” Portner said, “I couldn’t say no.”

For the rest of the crew, the creation process is just as exhilarating as the performance.

“They’re jamming it all together and often doing categories of plays all at once,” crew member Maddie Dippold ’16  explained. “They’re taking whatever genre a Shakespeare play is and making it all funny.”

Putting an original spin on a well-known playwright’s iambic pentameter isn’t entirely out of the actors’ realm of familiarity.

“Ricky describes the three characters as kind of like a family with myself in the father-figure role, Nathan as mother and Aidan as precocious child,” Benjamin said.

But one thing that the Bard probably did not intend was twenty-first century characters inserting themselves into his plays.

The characters on stage go by their given names but play absurdly exaggerated versions of themselves.

“It’s fun because I’m playing a character with my name,” Benjamin said. “But I’m not playing me.”

Indeed, if the individuals on stage were to appear suddenly on the College of William and Mary’s campus, it would probably draw more than a few suspicious glances. The characters are energetically crass throughout the production with various ridiculous costume changes thrown in for the sake of variety.

There will be two performances of the “Complete Works.”  March 15 (the Ides of March) and the other March 17 (St. Patrick’s Day) in the Campus Center’s Little Theater.