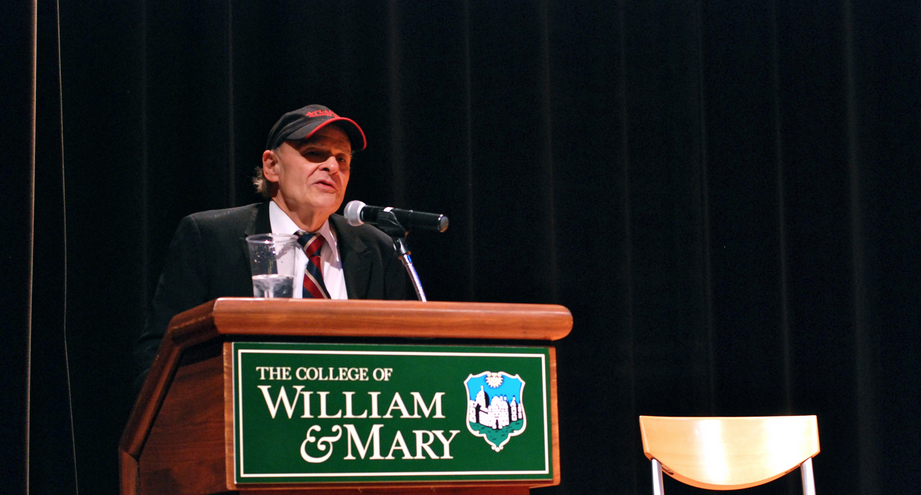 Tim O’Brien carries several things from the Vietnam War; memories, which have inspired multiple award-winning novels, and a white J.C. Penney shirt — bought in the United States — with the words “Made in Vietnam” stitched onto the tag, reminding him the war was not the end of the world.

O’Brien wears this shirt anytime he gives a talk about his writing, and he wore it to the College of William and Mary Thursday when he spoke as part of the Patrick Hayes Writers Series. The “Going After Cacciato” and “The Things They Carried” author shared some of his newer writings and spoke about his philosophy on fiction and war.

“Wars are billed to us almost always as pending catastrophes,” O’Brien said. “‘If we don’t win, the world is going to be a horrible place. It’s going to be catastrophe’ … Well here I am before you in this white shirt from a J.C. Penney store. Catastrophe?”

In the summer of 1968, 21-year-old O’Brien was drafted for the war. The chapter from “The Things They Carried” entitled “On the Rainy River” is an account of the internal debate he found himself arguing. In his talk, O’Brien described himself as having two heads: one that encouraged him to do his patriotic duty and fight on behalf of his country, and one that wanted to swim the short distance to Canada from his Minnesota hometown, so he would be safe from the draft.

The war, on the other hand, had just one head, and it was telling him to kill and to die.

“We never seem to run out of reasons to kill one another,” he said. “History is just full of them — some awful and some wonderful, and most of them somewhere in between. War is one-headedness. War is, ‘I am so right and you are so wrong that I’m going to kill you. That’s how right I am.’”

O’Brien went to war. The decision, however, was not as simple as choosing his country over himself. He went to war because he was afraid of what people would say if he ran away. On top of that, he didn’t really understand the war to begin with. It seemed no one knew the reason why men were being shipped overseas to their deaths. For these reasons, O’Brien still wonders if he made the right choice.

“I still wake up not knowing what the right thing to do is in those situations,” O’Brien said. “I sometimes think to myself, ‘What a coward you were. You just didn’t have the courage to say no.’ Other times, I’ll think the opposite. And the debate will go on, probably, for me, at least, to the grave, as it goes on for a good many people at my age, given the times we lived through back then.”

The war had a similar effect on the following generation. Adjunct Professor of English Brian Castleberry, who introduced O’Brien, expressed similar confusion in regard to his experience as a child growing up in the wake of the Vietnam War.

“When I was growing up, the Vietnam War was something a lot of people didn’t like to talk about,” Castleberry said. “I remember feeling uncertain as to who the bad guys had been. The Vietnamese? Us? The Russians? Marlon Brando? What had we been doing there? Looking around at popular culture in the early 1980s, it was anyone’s guess — especially if you were in grade school and not even sure what side of the planet Vietnam was on.”

Although the reasons for the war were unclear, the things O’Brien took away from it were tangible. Lying at the bottom of an irrigation ditch halfway around the world, O’Brien realized he was going to become a writer.

“There was within me a kind of determination,” he said. “‘If I live through this, I am going to bear witness. I am going to speak. I’m not going to fall silent, as so many veterans do … somehow, I wasn’t going to shut up. I was going to talk, and talk through story.”

Now, O’Brien is famous for his works of fiction that combine reality and imagination. This dichotomy, he said, is vital to storytelling. While many of the things he writes are not strictly true, he insists this is immaterial since they accurately depict the truth of the war, if not his own experiences.

He stressed, however, that a person does not have to fight in a war or experience trauma to become a writer. Many of the stories he told focused on his two children. One anecdote in particular that seemed to touch the audience — and O’Brien himself — was about his nine-year-old son who put together a package containing a peanut-butter-and-jelly sandwich, a book, a yo-yo and a letter for  a homeless man he had seen on his way home from school.

For Eliza Scheibe ’16 and aspiring writers in the audience, this anecdote was an example of how one can find poetry in everyday activities.

“It’s the human experience, really, that matters,” Scheibe said. “You don’t have to have gone to war to be a writer or to write about something profound, but you can just write about the little stories that happen to you every day.”

For O’Brien, the story is a light in a world that was darkened by war.

“Vietnam made me pretty cynical, pretty skeptical about the world we live in,” he said. “But there is, on the other side of the coin, a hope that is kindled inside me by that little boy that reminds me of the little boy I used to be.”