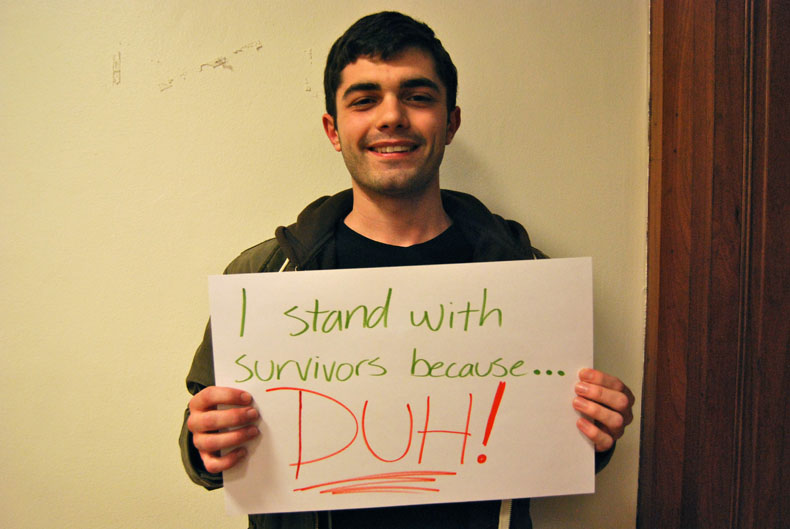 Steubenville, Ohio and Williamsburg, Va. are 427 miles apart. While the Steubenville rape case and its controversy captured national attention over the last few weeks, the trial and its aftermath may seem distant for many students at the College of William and Mary. The “William & Mary Stands with Survivors” project aims to bring the protesters’ message to campus.

“William & Mary Stands with Survivors” is a Facebook photo series that includes pictures of students, faculty members and administrators posing with signs reading, “I stand with survivors because…” with each participant providing a reason why he or she supports sexual assault survivors. The page has garnered about 550 likes since its creation March 24.

Hannah Boes ’14, a member of the Healthy Relationships/Sexual Aggression branch of Health Outreach Peer Educators, was paying attention to the recent events in Steubenville as the branch planned its Sexual Assault Awareness Week, which will take place April 15-18.

“The [Steubenville rape case] was happening the whole time while I was thinking about this project, and I was thinking about all this victim blaming and the rape culture thing that goes on, and this concept that somehow a survivor of sexual assault could have been implicitly or explicitly at fault for what happened to them,” Boes said.

Inspired in part by other photo campaigns and by a desire to show  members of the College were willing to defy rape culture, Boes intended to use photos of students holding signs demonstrating their support for sexual assault survivors in a slideshow that would run during Sexual Assault Awareness Week. She arranged to take pictures of students in various locations on campus as well as at her HOPE meeting that week.

After talking with other members of HOPE, Boes decided not to wait until Sexual Assault Awareness Week to share the photos she had taken. Instead, HOPE designed a Facebook page on which to post the images.

When the page went live, Boes had no idea how others would respond to it.

Doug Tibbett ’14, who is also heavily involved in the project, found himself both surprised and inspired by what contributors wrote on the signs in each photo.

“It’s so hard to put into words why we are trying to support these people, why we want to, just because it’s so obvious,” Tibbett said. “It’s hard to choose that one most important reason. And so to read all those things, you read it and in a lot of ways it affirms what you feel.”

Zach McDonnell ’15, a contributor to the page, agreed supporting sexual assault survivors is a clear choice. His sign read, “I stand with survivors because … duh.”

“There’s that idea of rape culture, and it’s definitely a part of culture for some people in this country,” McDonnell said. “It needs to be eradicated because it’s ridiculous for obvious reasons. That’s why I wrote ‘duh,’ because it’s such an obvious thing.”

Boes and Tibbett both hope the page will allow survivors, as well as their friends and families, to connect names and faces to people who can serve as their allies. The two also emphasized the existence of a variety of resources on campus, such as the Counseling Center, Residence Life staff, William and Mary Police and the Dean of Students Office, that offer help to anyone affected by sexual assault. There is also a sexual assault section on the College’s website which provides students with information about reporting sexual assault on campus.

In addition to demonstrating support for survivors, Boes hopes the page encourages contributors to continue to combat victim blaming.

To McDonnell, placing blame on sexual assault survivors is an issue that still needs to be addressed.

“[My friend back home] said, ‘My dad once told me [that] no means no, but sometimes no does mean yes,’ and he was being completely serious,” McDonnell said. “What that indicates to me is that this is a part of our culture, and it’s being passed down from generation to generation.”

Eden Stuart ’13, another contributor, said the Steubenville case is a good example of the pervasiveness of this attitude toward sexual assault.

“There were people who would legitimately bring up, ‘Oh, she was drunk,’ ‘Oh, she was unconscious,’ and act like that was a reason for someone to get raped, or that merited being sexually assaulted,” Stuart said.

Stuart’s sign read, “I stand with survivors because it doesn’t matter how short your skirt is or how much you drink … you are still a human being.”

“It’s your body,” she said.  “You can wear mini-skirts and makeup and whatever you want to wear, and it’s fine. You’re not asking for rape in the process of doing that.”

Boes credits the contributors to “William & Mary Stands with Survivors” for the success of this project and for encouraging a compassionate attitude on campus toward victims.

“None of this would have happened without the people who submitted those photos and the people who agreed to meet with me,” Boes said. “At the end of the day, it’s the members of the community who have created those photos. That has, in effect, created a wider statement that our campus is not going to stand for this. And I think that’s a really powerful thing.”