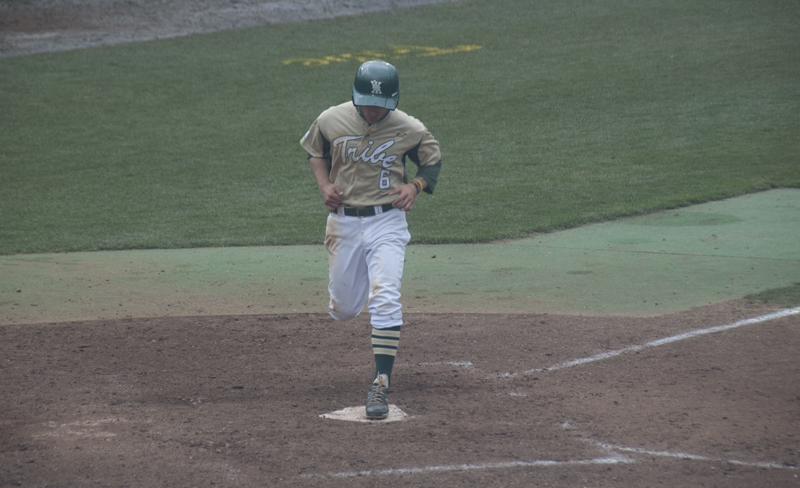 Coming into Wednesday’s game, William and Mary was 7-1 in one-run games. The lone loss came April 2 against Richmond, and the Tribe entered Wednesday’s game looking for revenge at Plumeri Park. With a 7-6 win over the Spiders, they succeeded.

Sophomore pitcher J.T. Castner started on the mound for the Tribe (26-13, 9-3 CAA), whose 3.06 earned-run average was set against the Spiders’ (23-12) .295 team batting average. Castner left the game in the seventh inning after surrendering six runs and seven hits, including two home runs.

Luckily for Castner, the Tribe’s batters had his back.

The Tribe offense scored all seven runs in its typical diligent manner, compounding hits with more hits. The real deciding factor was the 8-2 walk disparity between the two teams. The Tribe displayed impressive plate discipline all season long, walking nearly twice as many times as its opponents.

After Castner surrendered a run in the top of the first inning, the top of the Tribe’s batting order set the tone for the remainder of the game.  Junior third baseman Willie Shaw reached first on a walk then ran all the way home on junior second baseman Ryan Lindemuth’s double down the left field line. Sophomore first baseman Michael Katz, whose .422 batting average is the 3rd highest in the nation, hit his 14th double of the season, bringing home Lindemuth and putting the Tribe on top, 2-1.

Threatening to pop open the game before a full inning had been played, the next two Tribe batters loaded the bases with just one out. But Spiders pitcher Peter Bayer saved himself, striking out freshmen left fielder Jonathan Sarty and catcher Ryan Hissey. Each strikeout came amid a tense full count.

The bottom of the second inning was eerily similar to the first for the Tribe offense, as it notched another run while moving runners into scoring position. After senior right fielder Derek Lowe scored a hit off Shaw, the bases were loaded for Katz with just one out. Katz, however, swung into a double play as the Richmond bench breathed another long sigh of relief. The Tribe stranded three runners — again.

With the swing of a bat in the top of the third inning, Richmond took advantage of all of the Tribe’s efforts and near misses. The Spiders’ Jacob Myers crushed Castner’s pitch over the left-field wall to tie the game 3-3 in the third inning.

Hissey put the Tribe back in control in the fourth, driving home senior center fielder Ryan Brown with a flare hit that dropped just beyond Richmond’s second baseman’s outstretched glove. Wednesday’s two-RBI performance continued Hissey’s recent tear, as the catcher has contributed an RBI in each of his last four games and earned the Colonial Athletic Association Rookie of the Week award earlier this month.

The sixth was a big inning for both team’s offenses, with Richmond getting three runs and the Tribe scoring two. The telling part, however, was how these runs were earned.

Richmond’s Tyler Beckwith belted a three-run home run to give the Spiders a 6-4 advantage. Beckwith’s homer, Richmond’s second of the game, meant that in one game the Spiders equaled a third of the Tribe’s total home runs this season.

In contrast to Richmond’s long-ball style, the Tribe churned out two runs with small-ball persistence. Lindemuth cracked a screaming single to right field, which allowed Sarty to reach third and Brown to walk in for a run. Hissey then laid down a textbook sacrifice bunt towards the pitcher, who was left helpless to stop Sarty from scoring the tying run.

In the bottom of the seventh inning, Brown drove home freshman pinch-hitter Brian Lee to score the final and decisive run. As the leadoff batter, Brown — hitting .310 — reached base in all four of his at-bats Wednesday.

Junior pitcher John Sheehan won his fourth victory of the season by throwing two scoreless innings in the seventh and the eighth to clear the way for senior Matt Wainman in the ninth. Wainman delivered in a tough-save-situation, retiring the side and cementing the Tribe’s comeback victory. The save marked Wainman’s fifth of the season, tied for most on the team with freshman Mitchell Aker.

With Wednesday’s victory, the College increased its win streak to five games ­­— its third win streak of at least five games this season.

The Tribe will play a three-game series against CAA rival Old Dominion this weekend in Norfolk, starting Friday at 6 p.m.