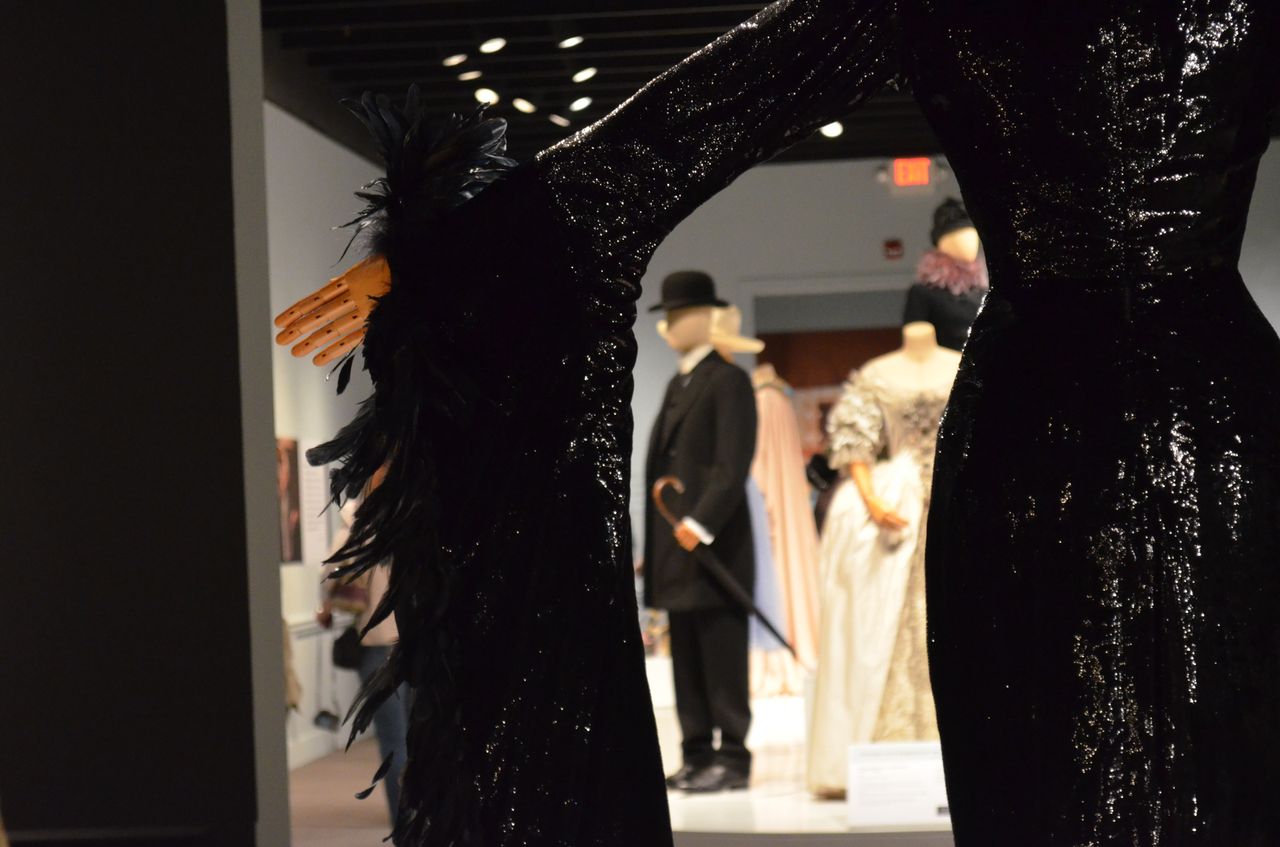 As an undergraduate theatre student, Glenn Close ’74 had a small dog named Penny which she brought with her to every rehearsal and performance. 22 years later, Close played the role of Cruella De Vil, a puppy-hating villain. The new Muscarelle exhibit, “Glenn Close: A Life in Costume,” showcases both sides of the actress’s career.

The exhibit displays costumes from Close’s roles in famous films and television shows such as “Fatal Attraction,” “Stepford Wives” and “Damages,” among others. Additionally, the exhibit tells the tales of her days as a student actress at the College of William and Mary and has a separate room featuring her costumes from “101 Dalmatians.”

This is the first exhibit of its kind in the Muscarelle. Upon entering the second floor showroom, visitors walk through the odyssey of Close’s acting career as told by her costumes. Each costume has an accompanying quote from the actress or a movie line to bring the garment to life.

“I think for the most part actors inhabit their costumes, like puppets hanging on a hanger waiting to come alive,” reads a Close quote on the wall of the exhibit.

Close’s personal stylist, Chuck Thomas, attended the gallery opening. According to Thomas, Close has kept a collection of costumes since her early days in film.

“It’s pretty amazing that Glenn had the foresight to collect these costumes early in her career,” Thomas said. “I think that even from her early years at William and Mary she had that connection to the costumes and that’s carried on throughout her film career.”

Thomas also emphasized Close’s strong connection to her costumes, no matter what the role.

“She studies the character like every actor, but in the clothes fittings, that is the part of the process that brings the character to life,” Thomas said.

The exhibit was created in collaboration with anthropology professor Danielle Moretti-Langholtz. She aimed to reveal the story behind each costume by placing characters’ quotes and photographs by each outfit.

“I tried to make it not about the movies, but about the characters,” Morietti-Langholtz said.

The opening room of the exhibit showcases costumes from Close’s time as an undergraduate acting on the College’s stage. In addition to showcasing costumes from her leading roles in “Anthony and Cleopatra” (’72), “Brigadoon” (’73) and “The Seagull” (’73), the room holds mementos of the actress’s time at the College, such as theatre programs, Flat Hat articles and graduation photographs.

While at the College, Close completed a double major in theatre and anthropology. As an upperclassman, she was inducted into Phi Beta Kappa honor fraternity.

Theatre and dance professor Patricia Wesp helped curate the exhibit’s room on Close’s theatre experiences at the College.  Close starred in productions and acted in supporting roles, in addition to doing work in costume design and production.

Although Close came to the College as a 22-year-old freshman with some professional acting experience, she remained very much involved in the College community.

“Absolutely, she was as much a part of the family and the community,” theatre professor and classmate of Close Patricia Wesp ’72 said. “She’s a very real person. Very idealistic about some things and very pragmatic about others. A typical William and Mary student in that sense.”

The exhibit’s main room flaunts Close’s personal costume collection, featuring the infamous outfits of characters such as Alex Forrest, Albert Nobbs and Claire Wellington. Most costumes were accompanied by accessories from the film.

“What a character wears has everything to do with who that character is,” a quote from Close on the wall of the exhibit read.

The last, and possibly most majestic, room in the exhibit showcases Close’s extravagant costumes from her role as Cruella De Vil in “101 Dalmatians” and “102 Dalmatians.” The three furry and sparkly costumes stand in a room covered in red, black and white Dalmatian spots.

The sharp talons on the fingernails of Cruella’s gloves emphasize the pure evil of the character. The sleek dangling cigarette holder speaks to the character’s high fashion. The glitter radiating off of her red feathers has a devilish glamour.

“You’ve won the battle, but I’m about to win the wardrobe,” hangs behind the larger-than-life costumes.

The exhibit is the first costume exhibit the Muscarelle has ever hosted and will be on display until the end of the semester.

“A costume exhibition is very different from what we’ve done here, especially going from Michaelangelo to Glenn Close,” Muscarelle marketing intern Kaitlin Noe ’14 said. “But costumes are different than art in that they really appeal to everyone.”