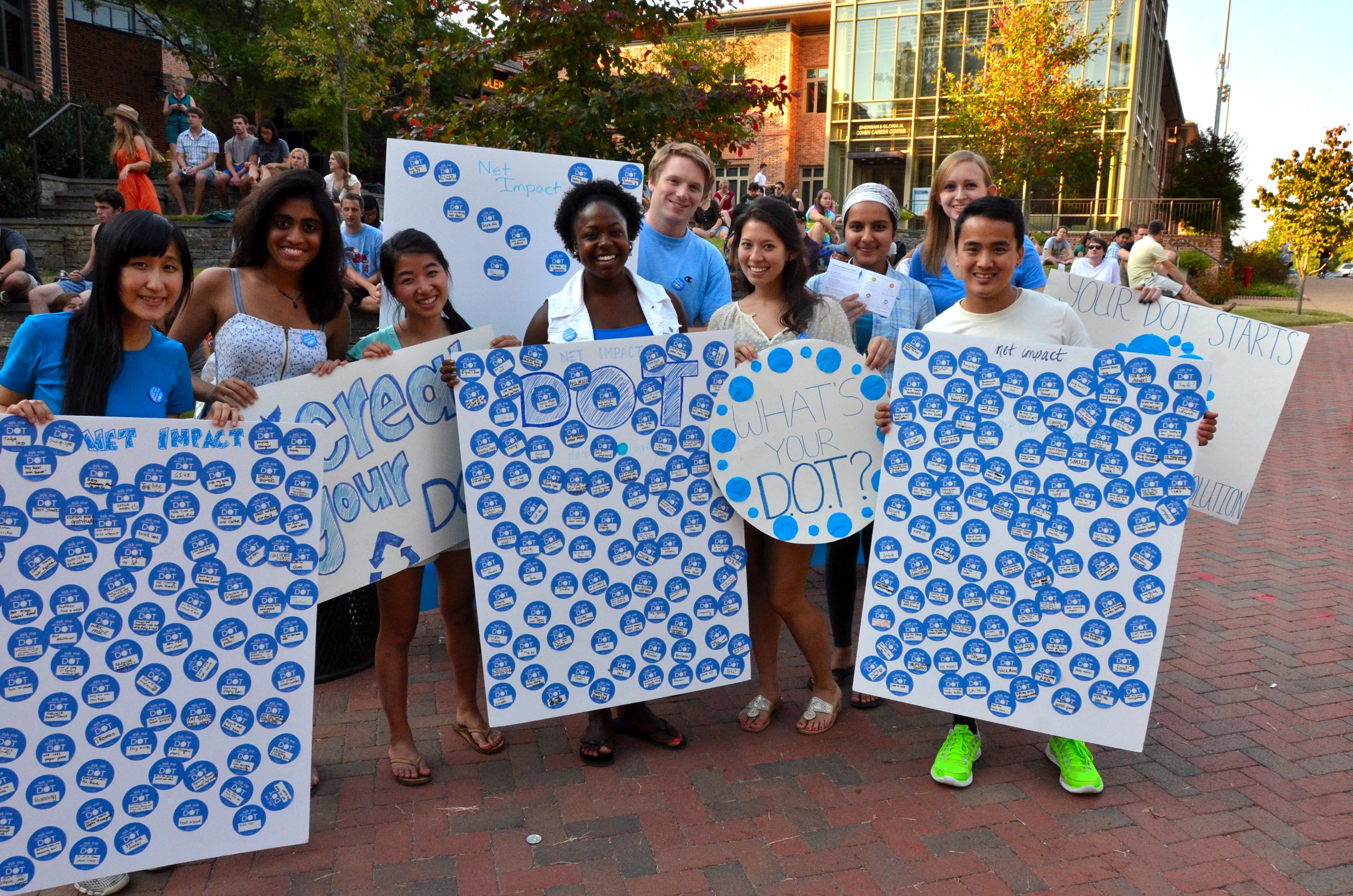 Blue balloons bobbed in the early fall breeze Friday afternoon. They were tied next to the Crim Dell and attached to the sundial. Students could be overheard asking their friends about the mysterious blue balloons that simply read “DOT.”

DOT, or Do One Thing for Sustainability, is a name that may ring a bell for some upperclassmen. The movement, which originated with the marketing firm Saatchi & Saatchi, was introduced to the College of William and Mary in 2010, but only lasted for about a year on campus.

Professor Christopher Adkins, director of the Undergraduate Business Program, headed the first launch with Net Impact, a student organization focused on making businesses more sustainable. A group of five seniors who call themselves DOT “diehards” are heading a re-launch this fall, with the help of DOT leaders, who will spread the movement to student organizations.

The main goal of DOT is to encourage students to change one thing about their daily routines, to do something that makes them happy while being sustainable.

Kim’s DOT is to exercise a couple times a week with a friend, rather than working out alone.

Contrary to popular belief, sustainability does not just have to do with the environment.

“DOT started a movement within the school to value sustainability more, not just in terms of environmental sustainability, but in terms of economic, social and cultural sustainability,” DOT diehard Alyssa Zhu ’14 said. “A DOT can even be as easy as calling your grandparents once a week if you want to spend more time with your family. Or it could be doing one act of kindness toward a friend.”

Because the campaign grew too big too quickly to survive last time, the team has taken on a new strategy. A smaller soft launch was staged Oct. 4, with the intention of introducing the arts and sciences campus to the idea of DOT.

The team tabled on the terrace for five hours, encouraging passing students to fill out DOT stickers with their personal DOT. Students who filled out a sticker received a second sticker, which was their admission to a party with free food at the College Delly that night.

Another launch will occur after fall break in the Mason School of Business where DOT began.

“From our understanding, the campaign kind of got taken over by people who didn’t really understand the main message of DOT,” Zhu said. “DOT is about sustainability, but it’s not about sacrificing for sustainability. It’s about making yourself happy, while doing something that’s good for the environment and your community. I think what happened was that people started trying to compete with their DOTs.”

DOT “leaders” were chosen through an application process, with the idea that they will introduce student organizations to sustainability, and help each group come up with their own DOT.

“This launch, we’re trying to encourage groups and clubs on campus to partake in this initiative and make it their own instead of our small group overseeing it,” Kim said. “We’re trying to make sure the organizations themselves take on DOT and once we’re gone, the initiative is still in place.”

The Competitive Gaming Club is already planning their own sustainability event, as a collaboration between DOT and their own initiative, Haste for Waste. In mid-November the club is holding a trash pickup that is open to all students. However, this is no ordinary trash pickup. The CGC is taking their core aspects, competition and gaming, and applying them to the event in order to make it more fun for participants.

“We ask, ‘How do we take what’s beautiful and advantageous about gaming and apply it to real life?’” club president Jonghee Lee ’14 said.

Lee’s DOT is to replace plastic water bottles with a reusable bottles.

Volunteers earn points for the amount of trash they gather. With those points, they can buy more pickup tools. The person with the most points at the end of the event wins a gift card.

This event is part of an effort to continue the DOT efforts beyond the initial launch.

“It’s an on-going campaign,” Zhu said. “It’s not just an event; it’s a movement, so we want people to remember that DOTs exist, and remember their personal DOTs. Our goal is to get people to stay committed to their DOTs, and to have different events or gatherings with other people who made DOTs. One of our main goals is to build community at William and Mary, while making the campus more sustainable and happy.”