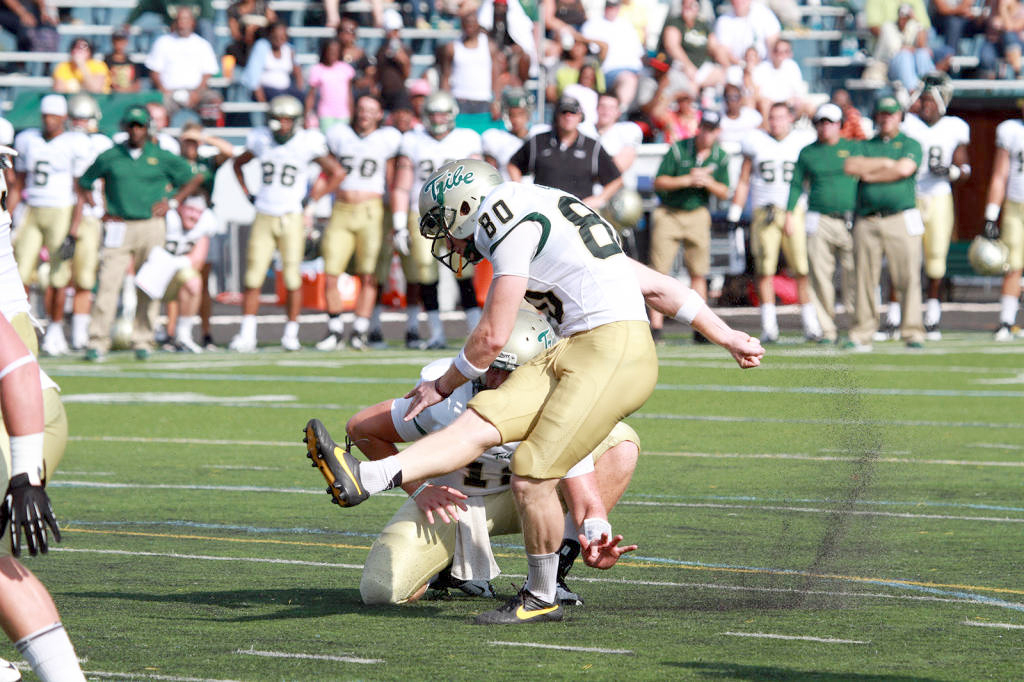 Six minutes and 17 seconds remained in William and Mary’s conference game at No. 20 Villanova Saturday. With the score tied at 13, and without starting senior quarterback Michael Graham, head coach Jimmye Laycock faced a fourth-and-one on the Wildcats’ seven-yard line.

The choice: try to convert for a first-and-goal or take the chip-shot field goal. Junior wideout Tre McBride, whose 37-yard reception put the College in field goal position, offered a tempered explanation.

“Of course, on offense, we want to get as many points as we can. Going for the three, it seemed like the best choice at that time and moment,” McBride said. “As a player, obviously, I would have loved to have gone for it. But we gotta take what we can get right away.”

Laycock did not risk the conversion, instead sending junior place kicker John Carpenter out for the 24-yard field goal attempt. Carpenter split the uprights, capping a 10-play, 68-yard drive that gave the College (3-2, 1-1 CAA) a 16-13 lead with 6:17 left to play.

“The decision there late, that fourth and one, you go for the field goal and try and pick up the thing, I mean, we had been playing great defense all year,” Laycock said. “In that situation, I said, ‘We’re going to get the points and put it with our defense to hold them,’ and we just weren’t able to do it.”

Junior tight end Bo Revell returned the ensuing kickoff 15-yards, setting up the Tribe on its own 45-yard line with 28 seconds left for a final drive.  A Wildcats sack ended the College’s hopes of a comeback, sealing the 20-16 loss.

Despite failing to contain Villanova late in the game, the Tribe put forth a dominant effort in the first half. Defensively, the College allowed 97 total yards in the first half, with just 18 of those yards coming on the ground.

Junior linebacker Airek Green provided the highlights, intercepting Villanova’s Robertson to set up Graham and company with a short field. Graham took the advantage, hitting junior wideout Sean Ballard for the eight-yard touchdown — a good play for the first score of the game.

After trading field goals, the College took a 10-3 advantage into the half, but not without losing Graham, who had completed 7 of 10 passes for 66 yards and a score before being thrown to the turf late in the second quarter. He would not return to the game.

With junior quarterback Raphael Ortiz still out with injury, Laycock had just one other quarterback with game experience: senior quarterback Brent Caprio, coming off an off-season shoulder surgery.  Instead of Caprio, who had seen action late in the blowout wins of the previous two games, redshirt freshman Steve Cluley got the nod.

Despite the injuries, the defensive unit gave the offense a short field again at the start of the third quarter. Junior defensive end Mike Reilly recorded a strip-sack — recovered by sophomore defensive tackle Tyler Claytor — to set up the Tribe on Villanova’s 27-yard line.

Another stalled drive translated into a 24-yard Carpenter field goal, upping the College’s advantage to 13-3. Dominant in the first half, and in much of the third quarter, the Tribe’s defense found itself without answers for the rest of the game.

A 54-yard run keyed a three-play, 75-yard drive leading to Villanova’s first touchdown of the day. The score marked the first time since its win over Hampton that the College allowed a touchdown. More importantly, however, it brought the Wildcats to within three points of the Tribe’s lead.

Robertson engineered another long drive to tie the game with 11:47 left in the fourth quarter. The 16-play drive covered 71 yards and ran 7:34 off the clock. All told, the Wildcats gained 236 yards to the College’s 109 in the second half, outscoring the Tribe 17-3.

“It was just a lot of plays we could have made that we didn’t,” Green said. “It hurts, but we just have to come back and do better.”

Bringing the No. 7 overall defense into Saturday’s game, Laycock struggled to account for the poor second half performance.

“We just missed tackles,” Laycock said. “Why, I don’t know. Maybe it was the heat. Maybe it was because we were tired. Maybe it’s because the quarterback from Villanova was running better.”

With the game tied and Cluley underperforming, Laycock inserted Caprio into the game. Caprio quickly found McBride for the 37-yard catch that ultimately set up the College’s final field goal of the day.

After Robertson scored the game-winning score on the ensuing drive, Laycock pulled Caprio for Cluely, who would suffer the game-ending sack.

While the decision to go with the field goal with 6:17 left in the fourth quarter can’t explain the loss, the College nonetheless narrowly missed a chance to down the preseason-favorite Wildcats.

“Congratulations to Villanova,” Laycock said. “We have to get back to work.”

The College returns to Zable Stadium to host Pennsylvania Saturday. Kickoff is set for 3:30 p.m.