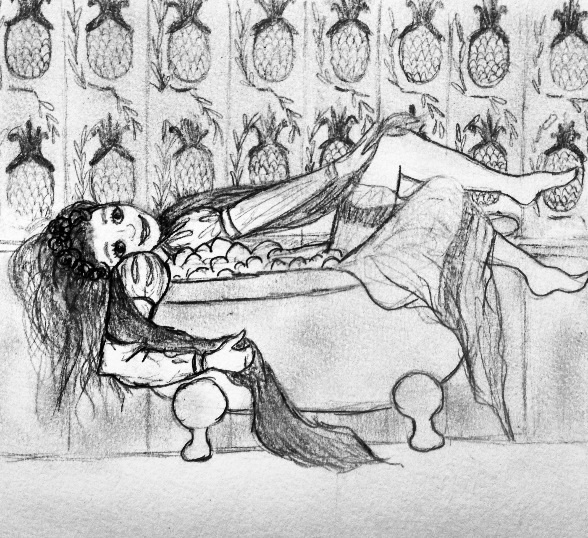 If you plan to stay at the Ludwell Paradise House overnight, don’t expect a good night’s sleep. It’s difficult to get proper shuteye while the ghost of an insane woman splashes and laughs manically in the next room. According to local legend, that’s just ‘Loony’ Lucy Ludwell Paradise, continuing her legacy of madness from beyond the grave.

Lucy was born into the gentile Virginian Ludwell family toward the end of the 18th century. From an early age, she demonstrated disturbing violent tendencies, forcing her parents to send her to England  in fear of her embarrassing the family at home.

“Lucy Ludwell Paradise is a ghost who in life was mentally ill, and apparently in death, she continues to be insane,” Britcher said. “Lucy is an example of why I am no ghost hunter and why I think people need to be a little cautious about such things. Crazy is unpredictable.”

In England, Lucy married scholar John Paradise, who died soon into the marriage. Shortly afterward, the widow returned to Williamsburg in a hurry — she was shunned by polite society after dumping the scalding contents of a teapot on a gentleman’s head in London. She quickly alienated Virginian society with her snobby attitude and penchant for stealing. Lucy was also known to bathe excessively, five or six times a day.

The final straw came when she began entertaining Williamsburg residents with her infamous carriage rides — which consisted of servants pulling a coach around the back porch of her house. Lucy would eagerly point out at the window at notable English landmarks, as her guests watched in terror. She was committed to a mental asylum around 1812 and would never return to her home on the Duke of Gloucester Street — as a living person, anyhow.

‘Loony’ Lucy is just one of the many specters haunting DoG Street. Longtime ghost tour guide Heidi Hartwiger — who has been a guide with Original Ghosts of Williamsburg Candlelight Walking Tour for 18 years — described one late night encounter with what appeared to be a Colonial Williamsburg re-enactor. As her tour group walked by the Wythe House, she watched a woman in servant garb melt into the door.

“I thought I would go into cardiac arrest,” Hartwiger said. “The little boy who had been my buddy all evening kept saying, ‘Miss Heidi, Miss Heidi, where’d that woman go?’ Then with the most profound answer that any spooks person had ever given, I said, ‘I think she went inside.’”

Hartwiger has come across this ghost multiple times in her career as a guide. She noted that local ghost author L.B. Taylor believes the phantom to be a “worrier” — perhaps a servant attempting to organize dinner for late company.

A former student at the College of William and Mary, Adam Stackhouse ’04 became an independent ghost tour guide primarily because he enjoyed wandering through Colonial Williamsburg on fall evenings.

One incident at the Wythe House left him questioning the possibility of the paranormal. After performing the customary “shoe-and-chant-deal” on the steps of the house, the crowd shifted strangely outside. Several startled members of the group claimed that they had been shoved to the side.

“Looking down from the steps it was like a thick semicircle of people with a big open area suddenly appearing where Lady Anne would have run down the sidewalk,” Stackhouse said in an email. “I think there’s justification for the vast majority of the knocks and lights you might encounter on any tour, but that one moment really stuck with me moving forward.”

However, not all of the ghosts of DoG Street manifest themselves in such alarming ways. One of Hartwiger’s favorite places to bring her tour group is the Bruton Parish Cemetery. Little Matty Whaley and his ghostly playmates are said haunt the graveyard and the Palace Green. Matty’s mother eventually founded a school in honor of her nine-year-old son that would eventually give rise to modern Williamsburg’s Matthew Whaley School.

“Often on the Palace Green people feel a pinch or a tickle or a pony tail gets tugged,” Hartwiger said. “We know it is Little Matty. The old timers I have talked to over the years tell me that just before sunset in the summer down near the Governor’s Palace listen carefully to the mockingbirds. They are not singing other bird songs — as mockingbirds will do — they are singing the laughter of children.”