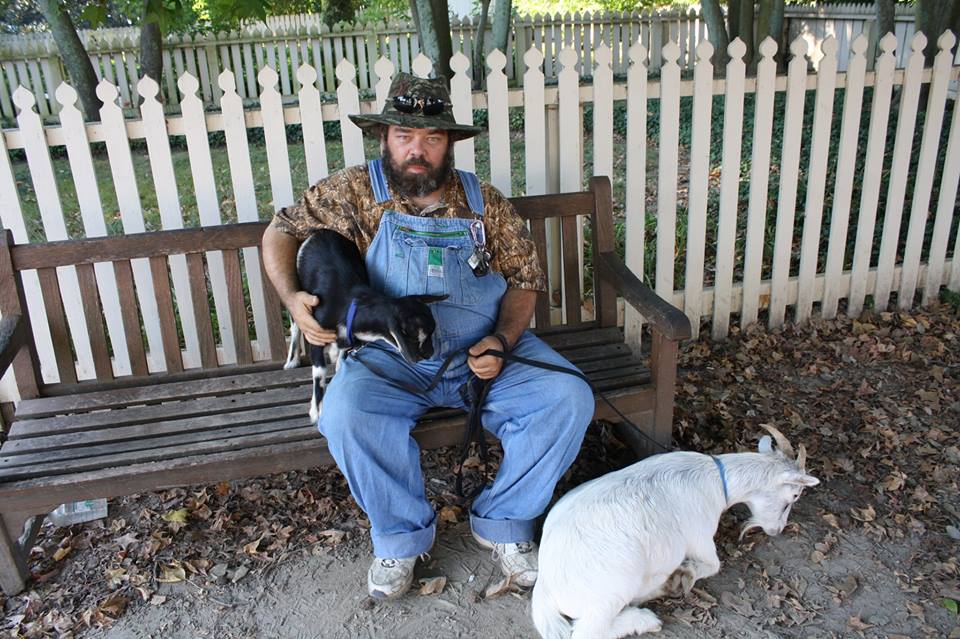 Flanked by his gaggle of pet goats, Newport News native Ric Moss loves to frequent Colonial Williamsburg. He owns four goats in total, and each is named after a Star Wars character.

During the weekly Farmers Market, tourists stop to take notice of Han, Luke and Darth trotting around the white tents lining Duke of Gloucester Street.

Unfortunately, this particular Saturday, Moss lacked his eldest and most dominant goat, Yoda.

Even students at the College of William and Mary have taken notice of Moss and his goats. Last month, there was even a post on the infamous Facebook group “Overheard at William and Mary.”

A student posted a picture of Moss and his goats with the caption, “Overseen in CW: man walking his goat on a Sunday morning.”

A slew of comments from other students at the College indicated that Moss had gained many new fans and acquaintances.

“Ric the Goat Man was very friendly and kind,” Kelly Reagan ’16 said of her experience meeting Moss. Reagan was a  commenter on the “Overheard” post.

Moss enjoys walking his goats because people often approach him to pet the goats and to talk with him about the animals. They are great conversation starters and attract plenty of tourists. According to Moss, people love taking pictures of and with the goats. Moss’s wife even made up business cards with his email address for him to hand out so that people can send him the pictures they take.

“It’s amazing the stories I get from [the] people [I meet],” Moss said.

Moss has met tourists from nearly every continent because of their interest in his goats. Some visitors tell him stories about eating goat as a delicacy in their homeland.

This culinary fact is actually the reason why Moss came to acquire so many goats. He spotted his first pet at the Tractor Supply Company store. Yoda was being sold for his meat rather than for his potential as a pet.

“[He was] a handsome fella and I couldn’t imagine someone eating him,” Moss said.

Yoda needed company to be happy, so Luke came along next. Darth was procured at an animal swap. Han was acquired just a few weeks ago. Moss has reached his maximum number of goats, he said, or else his wife will run him out of the house.

All of Moss’s goats are purely domestic pets and are behaviorally similar to his Shih-poo dog, Zara. Moss also keeps chickens, which the goats love to chase around the yard.

When asked what “the boys’” favorite activity is, Moss chuckled.

“Their favorite hobby is breakfast and dinner,” he said.

Moss boasts that his goats are quite intelligent. Recently, Yoda figured out how to get into the containers in which Moss stores their food. According to Moss, Purina makes excellent goat chow. In addition to dog food and Tupperware, the goats also nosh on leaves, grass and bushes.

Each goat has his own personality. Darth is known to be the loner of the group. Alpha-goat Yoda tends to dominate the others and often gets competitive and jealous when he is not the center of attention.

Moss has the strongest connection with Yoda, the goat he’s had the longest. When Moss comes home from work, Yoda comes running up to Moss and pushes him, encouraging Moss to pet him, just as a dog would.

“[My goats] are very social,” Moss said. “They try to see who’s the most dominant.”

The many dogs that frequent DoG Street often challenge the goats’ quest for dominance. Moss’s goats have been known to occasionally try to head-butt the dogs.

For the most part, however, Moss’s goats are friendly. If you take a picture, he’ll hand you a business card and ask you to send the pictures to his e-mail address. He encourages visitors and locals to approach him and meet his pets. He will most likely engage in charming conversation with you as you pet and play with his goats.