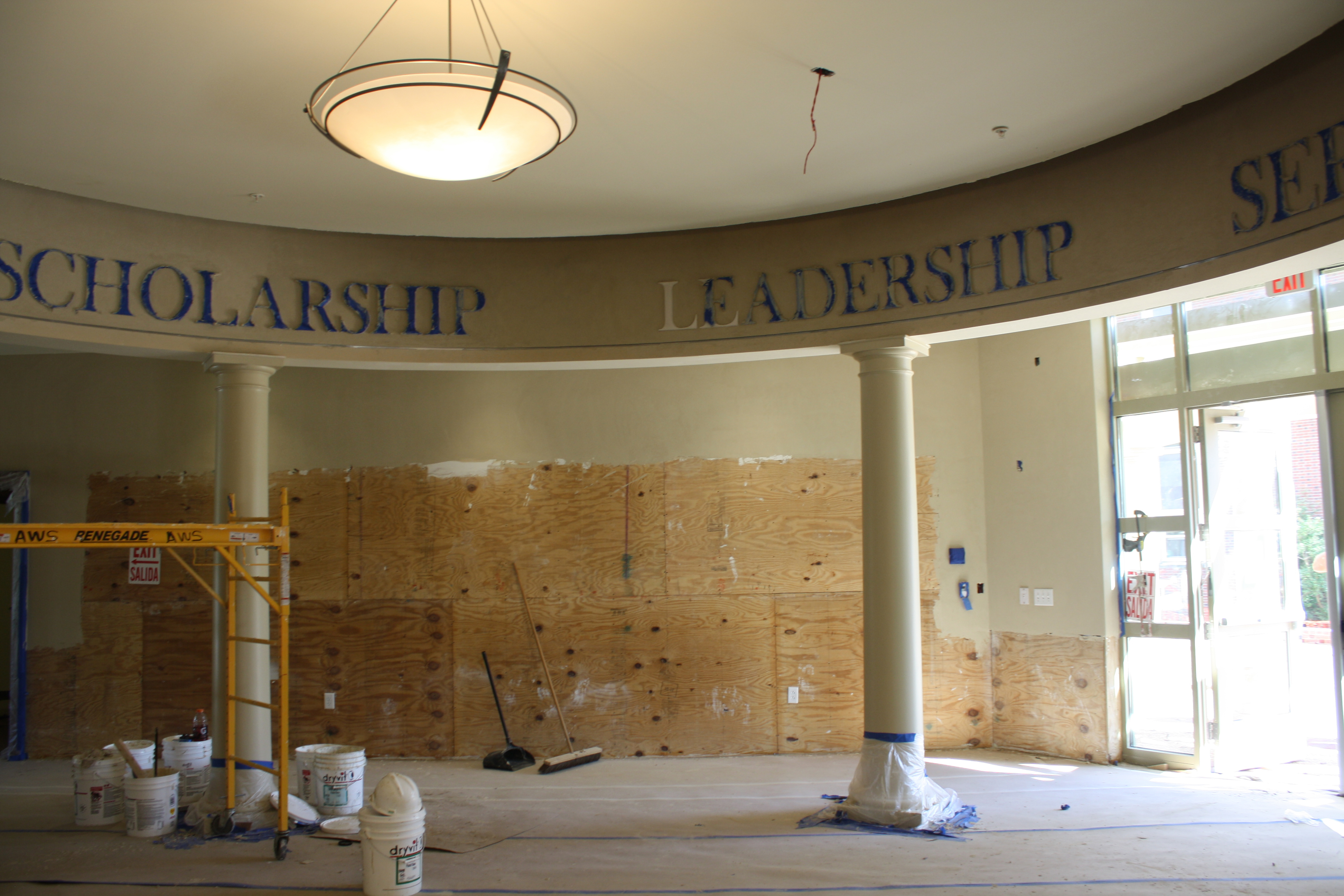 The College of William and Mary expedited the completion of the new fraternity houses in order for students to move in for fall 2013. Due to the limited amount of available resources, completion of the fraternity community building was delayed to complete the residences on time.

Unfortunately some residents have noticed problems with the daily function and construction of some of the buildings’ features. For example, within a few weeks of completion, there were reports of flooding in bathrooms due to malfunctioning shower drains.

Campus construction follows the list of Standards for Accessible Design devised by the Department of Justice’s Americans with Disabilities Act. These standards guide building planning in order to make buildings accessible to all students, including those with disabilities.

To follow this code, the new fraternity house showers must drain outward into a drain placed length-wise at the outer edge of each shower. The water from the shower curtain should drip directly into the drain, but, due to improper measurements, the ADA-compliant shower benches were too long and pushed the curtains out past the drain, causing improper drainage.

“In order to rectify this problem we have pulled the benches out of the showers and have smaller benches on hand if they are needed, as we have no students in wheelchairs currently living in the houses,” Wayne Boy, director of facilities planning, design and construction, said. “We have installed a rubber dam around the drains and have modified the drains so they could be more easily cleaned out. These modifications seem to have fixed the drainage problem and will be installed in all the houses.”

The funding for these post-opening changes was taken from the original construction budget, which included excess funds for potential problems.

Also, as a result of changes in ADA code, doorknobs can no longer be twist knobs and must be levers, since they ensure that doors are easier for all individuals to open. Only levers were installed in the new houses. However, some of the houses’ exterior front doors did not close completely due to weather stripping that was too thick. Troubleshooting with smaller stripping is complete and has rectified the problem.

“There was nothing structurally wrong with the air conditioners that were installed. They were just not cleaned as thoroughly as they should have been the first time,” Boy said. “We just had them cleaned out to make sure all the construction dust was eliminated.”

Additionally, Boy said fireplaces were never part of the design plan and that it was ultimately decided that the houses did not need fireplaces because their possible liability costs outweighed their aesthetic benefit.

Despite the minor problems, most residents are happy with their new homes.

“The Fraternity community is truly appreciative of the new houses that the school has provided. They are a major upgrade on previous housing,” Jake Silver, vice-president of public relations for the Inter-Fraternity Council, said in an email. “Understandably, new dorms and recent construction projects are going to have some issues that need to be worked out and they are being dealt with.”

To complete the fraternity houses on time, work on the community building was delayed.

“We pushed the construction of the community building back to complete the houses first,” Boy said. “Due to commissioning, we have to inspect materials before construction, inspect equipment before use, and then check the completed building in order to work through issues. This process takes quite awhile, which is why it has taken extra time to officially open the community building and to give Shylan [Scott, assistant director for fraternity and sorority housing] her apartment.”

Scott now has an apartment in the community building. However, until the completion of the building, she lived in a rented trailer parked next to the building.

“My ‘single’, aka my little trailer, has been just fine! In some ways I will be a little sad to see it go; it is a pretty unique experience,” Scott said in an email. “I’m excited about the fraternity and sorority community building and the myriad of ways chapters and the campus community will be able to use the space. It truly honors scholarship, leadership, service, and community, the values of fraternities and sororities and our William and Mary Community.”