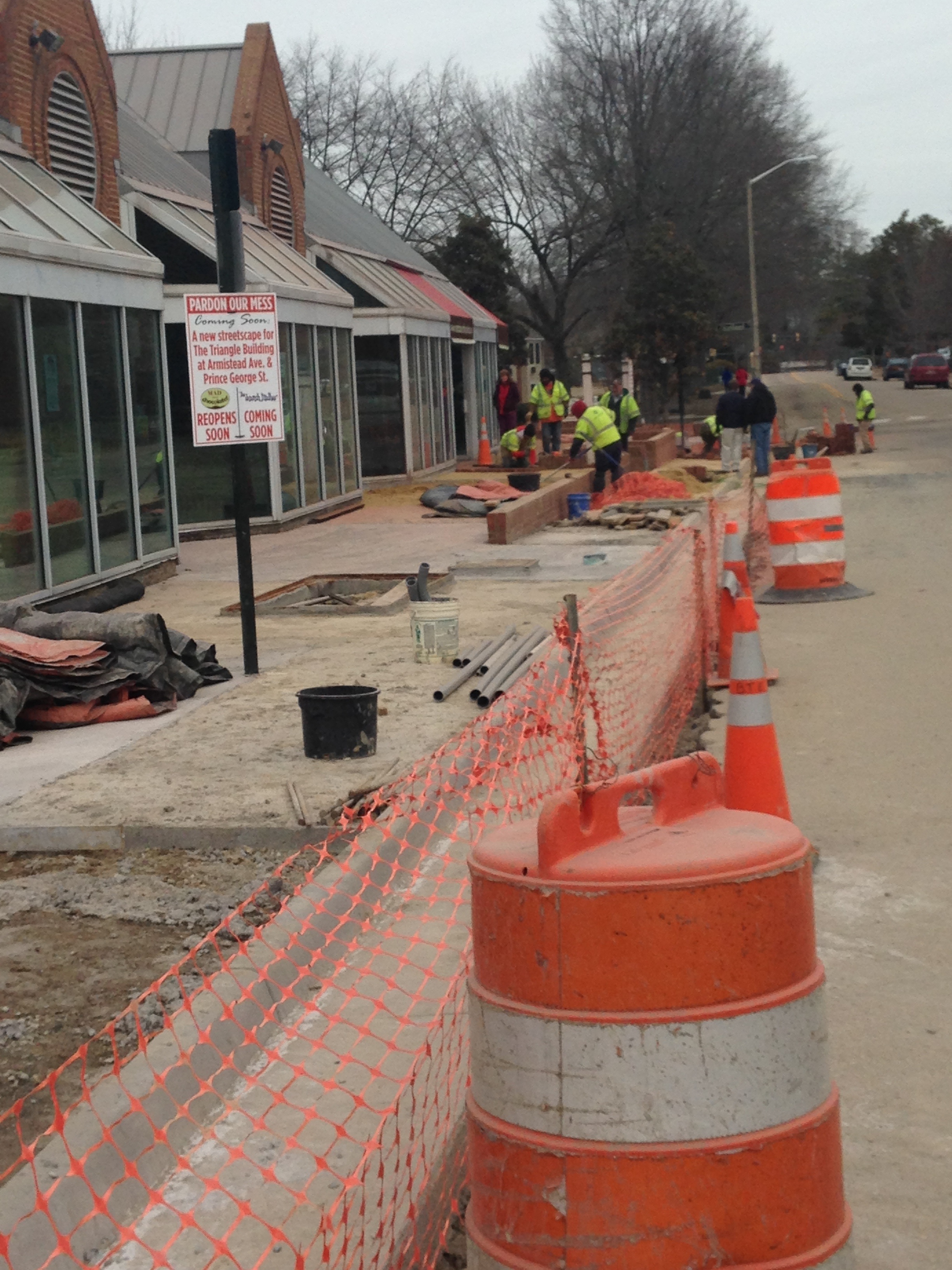 Construction on Prince George Street and Armistead Avenue has been ongoing since October 2013 but, little by little, the project is coming to fruition.

The idea to remodel the area surrounding the Triangle Building — which houses MAD About Chocolate and the new Jewish Mother, opening soon — has been in the works for several years.

“We started this project Oct. 1,” City Engineer Aaron Small said. “The actual concept of the design started long before that. It was mainly focused on Prince George Street. … It expanded to include Armistead Avenue probably about two years ago.”

The city-funded project involves general beautification, such as turning concrete paths into colonial-style brick ones and planting trees, and increasing “walkability” by widening sidewalks. Armistead Avenue and Prince George Street will also be resurfaced, meaning the top level of asphalt will be ground off and a new one will be laid down.

“For the city of Williamsburg to take that on, that beautification project for the sake of business, for the sake of aesthetics and walkability, that’s very unusual,” Economic Development Specialist Corinne Blackford said. “Normally that’s something that a private investor would have to take upon himself.”

In this case, though, the city of Williamsburg owns the property in question and operates its own roads system, so the project has become a citywide endeavor. The city’s involvement has meant more funding and more resources for the construction.

The goal is to make the transition between Merchant’s Square and Tribe Square more cohesive. Currently, the tourist-friendly area seems to be demarcated by brick paths and gravel roads. This construction project aims to assimilate the businesses on the outskirts of Merchant’s Square into the part of the city most attractive to tourists.

“They kind of stop when the brick stops,” Williamsburg Communications Specialist Kate Hoving said. “It really isn’t physically far, but psychologically it felt far, so this is kind of drawing people.”

Because of the work, MAD About Chocolate closed its doors for the month of January. While they meant to re-open Feb. 4, inclement weather has slowed construction because concrete cannot be poured in weather under a certain temperature.

“A lot of people are intimidated by construction,” co-owner Connie Desaulniers said. “And especially local people have been confused about it. … It definitely has affected business, and that’s pretty much the nature of the game when there is construction like that.”

However, Desaulniers said she expects business to pick up again and to make up for losses once the building’s surroundings have been completed.

“The nice thing is, it will really be part of downtown,” she said. “It’s been a little bit isolated from everything, so once this Prince George corridor is finished off we’ll be part of it.”

Construction around the Triangle Building is scheduled to be completed March 1. However, work on sidewalks and various other projects in the greater area will continue into the summer and next year. Future work includes constructing a sidewalk on Richmond Road that will connect the Prime Outlets to downtown, and one on Bypass Road from Route 132 to Parkway Drive.