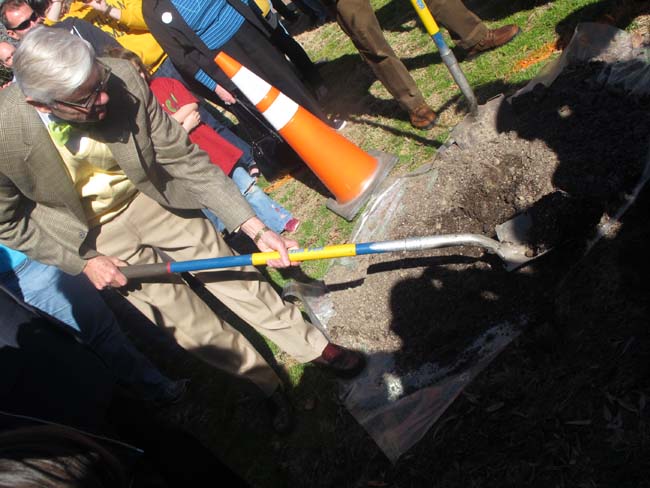 It is no myth that Sir Isaac Newton was inspired to formulate the theory of gravity after witnessing an apple fall from a tree. The College of William and Mary’s physics department hosted “Newton Day”  Feb. 22, celebrating the life of the great scientist and mathematician and the planting of clones of the famous apple tree at the College.

The celebration was coordinated by physics professors Marc Sher and Joshua Erlich.

“He started it,” said Sher, pointing at Erlich.

Erlich was reminded three years ago while lecturing on gravitation that many institutions around the world have their own Newton trees.

“And I thought, why not us?” said Erlich.

He had heard it said that any institution worth its salt has a Newton tree.

Careful cultivation has ensured that clones of Newton’s inspirational tree exist worldwide. The Massachusetts Institute of Technology has a Newton tree. The founder of MIT was a member of the Tribe named William Barton Rogers. Erlich and Sher petitioned College President Taylor Reveley two years ago to request a cutting from MIT. MIT graciously complied.

“[Reveley] said he had received many strange requests in the past, but this one was up there on the list,” said Sher.

Sher enlisted biology professor Martha Case to oversee the biological logistics of receiving the cutting and ensuring that a new tree would thrive on campus.

The long-anticipated planting took place outside Small Hall at 2 p.m. on Feb. 22.

The planting now makes the College home to two historical gems from Newton’s life. The Special Collections Research Center in Earl Gregg Swem Library houses one of the first editions of Newton’s “Mathematica Principia.” The ancient text contains Newton’s laws of motion and the law of universal gravitation. The “Principia” was on display in Small Hall during Newton Day. The display was just one of many interdisciplinary attractions during the festivities.

Catie Liebeck ’16 attended a lecture given by Jackson Olsen ’17 entitled “The Significance of William and Mary’s ‘Principia.’”

“The highlights of his lecture included the discovery that the person that was writing in the margin of the book was just updating the ‘Principia’ to include the new information from the 3rd edition,” said Liebeck in an email. “Also, having the nitrogen ice cream was a sweet treat!”

The treat Liebeck referred to was made from liquid nitrogen as a demonstration during an event put on by the Society of Physics Students dubbed “Newtonfest.” Newtonfest also featured a pool of cornstarch and water that forms a concoction known as “oobleck.” Oobleck at rest is a thick liquid, but it hardens with applied pressure. Nathan Vassey ’15 became acquainted with oobleck’s oddities.

“A friend and I were debating, what would happen when you poked it? Would it go straight through or would you hit a wall? It hit a wall,” said Vassey.

Vassey also remarked on the meaning of Newton Day.

“The coolest [part] was knowing that what I’m learning in physics right now was discovered by someone hundreds of years ago,” said Vassey.

Dava Sobel was one of Newton Day’s special guests. Sobel is a science writer who has contributed to many publications including The New York Times. Sobel gave a Q&A session in the Cohen Career Center on the morning of Newton Day.

Sobel wrote a play titled “And the Sun Stood Still.” It is about another historically significant scientist named Copernicus and his struggle with publishing his theory of heliocentrism in the face of opposition from the Catholic Church. Although the play is not about Newton, it includes a dramatization of a landmark in science similar to Newton’s discoveries which rounded out the sentiment that Newton Day was meant to celebrate.

Sher approached the theatre department about putting on a staged reading of Sobel’s play as a part of the festivities. Associate professor of theatre Liz Wiley immediately agreed to direct the reading.

“I love opportunities where we can have interdepartmental collaborations. … If we look at the human element [of science] and how it’s affecting the people around them then I think it helps for us in our century to understand the impact of it. … We remember history when we attach a personal story to it,” said Wiley.

Shaan Sharma ’15 was one of six students to put on the reading. Sharma is double majoring in physics and a self-described “Frankenstein” major of English, theatre and anthropology. A staged reading of “And the Sun Stood Still” was right up his alley.

“So much is in the abstract,” Sharma said. “It’s just math; you plug and chug through these things but real people went through and had challenges facing them and lived their lives and you get to look at something tangible and physical that is representative of the science that you’re abstractly learning about. … I think [the tree] is a nice sentiment.”