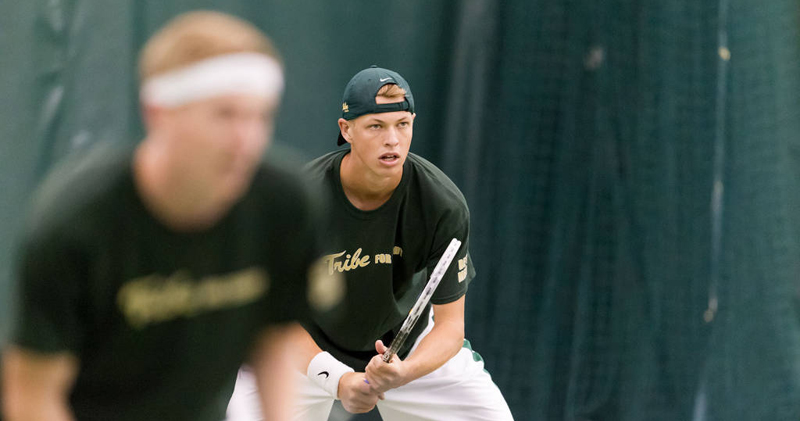 On the women’s side, Old Dominion started the match by taking the early doubles point with two wins at the No. 1 and No. 3 spots. The College lost an early doubles match 8-1 at the No. 3 position.

While the No. 2 pair of freshman Melanie Roy and senior Sidney Smith fought to 7-7 in a tiebreaker, the Monarchs solidified the point at the No. 1 spot, 8-6.

In singles, the Tribe racked up two wins in the No. 2 and 4 positions. At the second spot, sophomore Leeza Nemchinov earned her fifth straight win, beating Ingrid Vojcinakova, 6-2, 6-0, and improving to 16-11 for the year. At the No. 4 spot, freshman Nabila Farah beat Ivana Vukovic 6-1, 6-1, only dropping a game each set, en route to her 12th win of her career.

Old Dominion won at the No. 1, 5, and 6 spots. At the No. 1 position, senior Maria Belaya lost the first set 2-6, but claimed the second 6-2. Nikol Hirstova of the Monarchs took the third set 6-2, clinching the win for Old Dominion.

The men took the courts Saturday against Dartmouth and suffered a 4-1 loss to the Big Green.

The Tribe had a solid start, securing the doubles point with a pair of wins at the No. 1 and 2 positions. At the No. 2 spot, the team of freshman Addison Appleby and senior Ben Guthrie rolled to their fourth straight win, topping Chris Kipouras and Diego Pedraza 8-2. Junior duo Aaron Chaffee and Will Juggins picked up an 8-5 win against Brandon DeBot and Brendan Tannenbaum.

Freshman Damon Niquet won his opening set tiebreaker at the No. 5 spot, 7-6 (4), and had a commanding lead of the second at 4-1. However, by then play had stopped and Dartmouth had solidified their win.

During Sunday’s doubleheader, the program celebrated the “Tribe for Teddy” event, in support of former player Alex Fish’s ‘06 infant son, Teddy, as well as his family. Teddy suffers from Menkes disease, a rare disorder causing copper deficiency in the body.

In its morning match, the Tribe took on CAA foe James Madison, yielding a 6-1 win over the Dukes. The Tribe swept the doubles matches with a pair of 8-4 wins at the No. 1 and 2 spots, and an 8-6 win at the No. 3 position.

After earning their doubles point, the College went on to dominate singles play, winning at almost all spots, except at No. 2, where Guthrie retired in the second set. The Tribe racked up 6-0 set wins: Juggins beat Brett Moorhead 6-0, 6-1, Niquet defeated Milkan Ruzic 6-0, 6-0, and senior John Banks won his match against Niels Kathol, 6-0, 6-1.

“Tribe For Teddy” was met with even more home wins after the morning matches, as the Tribe swept Hampton 7-0. Following a pair of 8-3 wins in doubles, the Tribe went on to win all six matches in singles play.

The College didn’t give up a set, as all players won their matches in straights. At No. 6, freshman Austin Davidow double bageled Henry Drakeford, 6-0, 6-0, marking a solid victory for the Tribe.

The Tribe will honor its three seniors, John Banks, Ben Gurthrie, and Ben Hoogland during its home match against the Blue Hens.