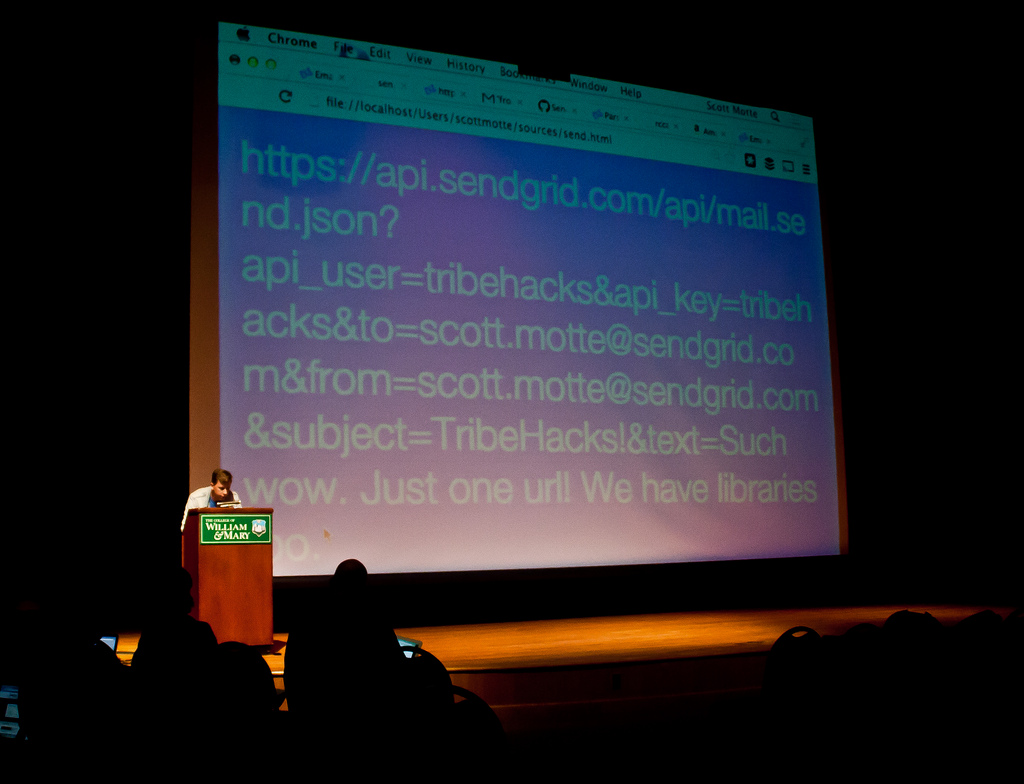 The atmosphere in Earl Gregg Swem Library took on a new level of intensity last weekend. The building was the location of the College of William and Mary’s first ever 24-hour collegiate hackathon. Creator Joe Soultanis ’15 dubbed the event “TribeHacks” and hopes that it will mark the beginning of a new culture of computer science here at the College.

Computer “hacking” might at first imply that 250 student attendees spent a full day trying to exploit weaknesses in a computer system, but in the computer science world, a hackathon is something quite different. Matt Sniff ’15, a TribeHacks collaborator, put it into layman’s terms.

“It’s 24 hours to create something of your very own on the web, mobile or whatever platform you want. ‘Hack’ really just means ‘ingenuity,’” Sniff said.

TribeHacks was born after Soultanis and Sniff attended the biggest collegiate hackathon in the country, PennApps, for the second time.

“I thought this was really cool, and I really wish we had something like this on campus,” Soultanis said. “It really inspired me to do computer science in general. There’s such a cool culture of people out there. I was like, ‘I want to do this, let’s go.’”

Swem is an ideal location for a hackathon, but its administrators rarely allow non-Swem events to take place in the building.

“We have to be really deliberate and really thoughtful about it,” Associate Dean of Research and Public Services in Swem Lisa Nickel said. “They organized everything. We were really impressed with their idea and their planning.”

The funding Soultanis procured through sponsorship allowed TribeHacks to provide participants with free registration, travel reimbursements and food in addition to paying for extra security and housekeeping in the library. These measures were necessary for the 24-hour event to take place.

It might seem surprising that an event in its infancy could attract so many corporate sponsors. On the contrary: collegiate hackathons are goldmines for software and technology companies.

“[There is] such a demand for hackathons, we don’t even have to do anything other than say we’re hosting [one] and the sponsors and the students roll in,” Sniff said. “These are the kinds of students [the companies] want to interact with.”

TribeHacks had a few notable features besides endurance programming. A panel of entrepreneurs spoke to attendees on Saturday evening to highlight the range of possibilities and success that hacking can introduce. Jamie Bieron ’15 attended the event for fun, and to see some cutting-edge technology.

“I was very impressed with the amount of hardware they were able to bring,” Bieron said.

“It made me really dizzy,” Bieron said.

Perhaps just as notable as the technology demonstrations were the accommodations TribeHacks made to attract and train novice hackers.

“What’s really exciting about it is that we’re seeing a lot of people signing up from William and Mary who aren’t even computer science majors. They’re just interested in it. And I think it’s a really cool gateway for them to just see what you can do with computer science because it has this aura or stigma about it that’s just a bunch of nerdy dweebs doing tech things, and it’s not. There are so many different directions to go with it,” Sniff said.

Soultanis next plans to start a hacking club at the College. Both Soultanis and Sniff praised the computer science department but lamented that there are not enough opportunities to practically explore hacking.

The College certainly has potential to become technologically inclined. For example, Yancey Strickler ’00 was a co-founder of the crowd-sourcing website Kickstarter. TribeHacks could be the first missing link to a new, tech-savvy era at the College.