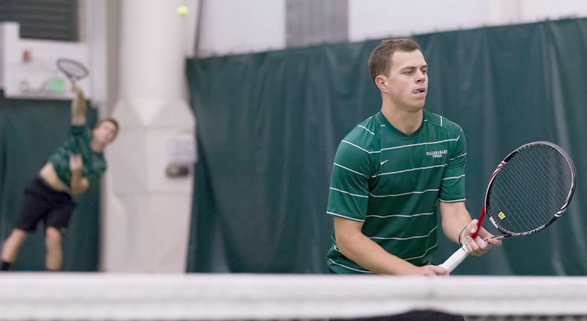 Typical Williamsburg rain set the mood for the Colonial Athletic Association tennis tournament last weekend, as William and Mary ended their season with a semifinal exit.

The Tribe (17-9, 2-0 CAA) claimed a solid quarterfinal win over Hofstra (6-7, 1-2 CAA), but fell to the College of Charleston (16-5, 1-1 CAA) in a hard-fought battle during Saturday’s semifinals at the McCormack-Nagelsen Tennis Center.

In the quarterfinal round, Hofstra struggled to keep up with the College. With energy and urgency, the Tribe swept Hofstra 4-0 while not dropping a single set in either singles or doubles.

In singles, the Tribe allowed Hofstra a total of 6 games. At the top two spots, Hoogland and Juggins shared a pair of 6-1, 6-1 straight set wins over Richman and Bailly, respectively. At the No. 6 post, Chaffee rolled past Pires, 6-0, 6-0. Play ended early at the Nos. 3, 4, and 5 positions due to the College clinching the match.

With confidence and a hot streak of wins in the quarterfinal round, the Tribe went into the CAA semifinals against No. 65 Charleston. Banks and Hoogland racked up an easy win at the No. 3 doubles spot, defeating Charlie Ghirskey and Zack Lewis, 8-1. Freshman Addison Appleby and senior Ben Guthrie won the early doubles point for the Tribe with an 8-5 win over Crescente Lesser and Rodrigo Encinas.

The momentum took a turn in singles play, as the scores began to lean in Charleston’s favor. Guthrie retired at the No. 2 spot halfway through the second set and dropped the match 6-2, 3-0. Juggins lost in straight sets to Lesser, 7-6 (3), 6-4 at the No. 3 position.

Following a pair of losses, Brice Allanic of Charleston took down Hoogland in a three-set grinder. Hoogland claimed the first set in a tiebreaker, 7-6 (5), but went on to lose the next two, 4-6, 1-6. It was a tough exit for the senior from Illinois, who ended his career with 72 singles wins.

Continuing his win streak at No. 5, freshman Damon Niquet fought to a three-set win over Charleston’s Zach Lewis. Niquet claimed the first set 6-3, but lost the second in a long series of games that resulted in a tiebreaker — 6-7 (9). Niquet responded with a convincing 6-2 third set victory, defeating the Charleston sophomore with a final score of 6-3, 6-7 (9), 6-2. Niquet topped off his season with a 22-9 record in singles, the highest winning percentage on the Tribe’s roster.

Banks, the senior from Charlotte, N.C., claimed the first set at the No. 6 spot, 7-6 (1), but was stopped short in the second, as the deciding 5 spot match determined the Tribe’s semifinal loss. Banks had 63 wins in his time at the College, with 20 wins and 14 losses in singles this season.

Charlie Ghriskey was the dagger in the loss. Sophomore Scott Huang fell to Ghriskey in straight sets, 6-4, 6-3. Huang ended his season with 22 singles wins.

The Tribe finishes its season with a 17-9 mark, an improvement from last year’s 12-15 record. Next season begins in September against North Carolina at the Duke Fab Four Invitational.