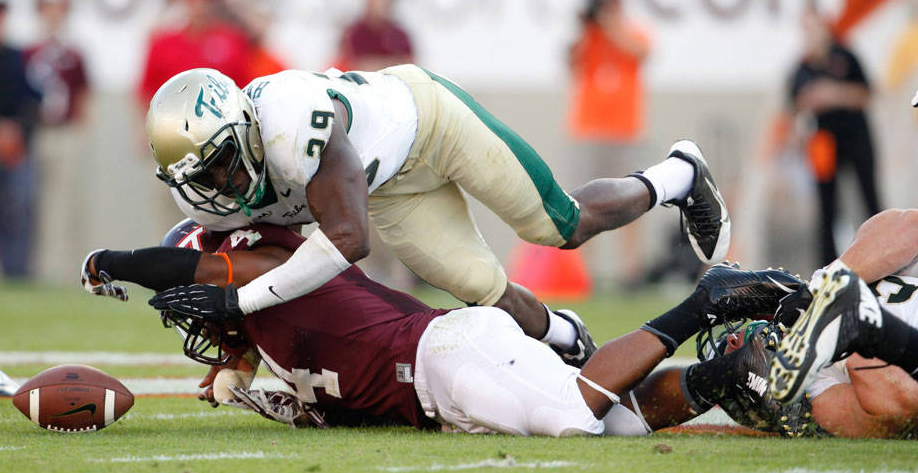 The day started with such promise, with William and Mary searching for a validating win against Football Bowl Subdivision opponent Virginia Tech. The College has pursued such a win for years and many of the Tribe’s fans dared to dream that this would be the year. The Tribe fell to the Hokies 34-9 in Blacksburg, Va. Saturday.

The Tribe (0-1) showed flashes of promise early, and even held the ball in Virginia Tech territory while trailing 7-6 in the second quarter. But a fumble by sophomore quarterback Steve Cluley and a few unfortunate penalties crushed the Tribe’s hopes by the middle of the third quarter.

“I thought we played very hard,” head coach Jimmye Laycock said. “I would have liked for us to have played better and not made some mistakes. It came down to some major mistakes that we knew we couldn’t make going against a team like Virginia Tech, but we gave it our best shot.”

The Hokies outgained the Tribe 488 yards to 193, picking up eight of 15 third down conversions and holding the College to just 12 first downs in the game. Senior receiver Tre McBride finished with four catches for 62 yards, but left the game with an ankle injury at the end of the third quarter. Junior running back Mikal Abdul-Saboor showed his mettle with 85 yards and an 8.5 yards per carry clip.

Things were ominous from the College’s opening possession, a three-and-out that ended with senior tight end Bo Revell being carted off the field after a failed third down pass. The poor first possession put pressure on the Tribe defenders from the onset.

For its part, the College’s defense put up an impressive fight against the Hokies early in the game. The Hokies converted four third down attempts, though, finally reaching the end zone on a 13-yard pass to receiver Isaiah Ford. Hokie quarterback Michael Brewer, who finished with 251 passing yards and two touchdowns, completed six passes on the drive to put the Tribe in a 7-0 hole.

The Tribe responded to the touchdown by taking brief control of the contest, starting with a 40-yard scamper by Abdul-Saboor that pushed the offense into Hokie territory. Even though the Tribe offense stalled soon after, senior kicker John Carpenter’s field goal cut the deficit to 7-3.

The College’s defense responded in kind by forcing a turnover on Virginia Tech’s next drive. Sophomore defensive lineman Chris Donald tipped Brewer’s third down attempt to senior linebacker Airek Green, who made a diving interception. It was one of several sharp plays from Green, who finished with seven tackles and a fumble recovery.

Cluley immediately took advantage of the turnover, lobbing a rainbow of a deep ball to McBride on the next play. Although the College again fell short of the end zone, the 43-yard gain set up another field goal and cut the Hokie lead to 7-6.

After the Tribe defense forced a Hokie punt, the College’s offense drove the ball to the Virginia Tech 39, briefly threatening to take a first half lead. Momentum immediately shifted, however, when Hokie linebacker Chase Williams flattened Cluley and forced a fumble. Virginia Tech’s Derek DiNardo scooped up the ball and charged all the way to the Tribe’s two-yard line, striking a damaging blow to the Tribe’s chances.

“We knew going in that one mistake can always change the game, so we try to prepare, try to be on our p’s and q’s. And we let a couple plays go the other way,” Green said.

The Hokies soon scored on a tough catch by tight end Bucky Hodges, who faced tight coverage from Green, still managing to give the hosts a 14-6 lead. The College went three and out on its ensuing possession, and the Hokies responded with a 70-yard drive, a field goal and a 17-6 lead just before halftime.

The Hokies received the ball to start the second half, going on a 74-yard drive that took seven minutes off the game clock. The Hokies benefited from a running into the kicker penalty on a fourth and five punt from their own 11, but otherwise played sharp offense en route to a 27 yard field goal and a commanding 20-6 lead.

Offensively, the Tribe barely posed a threat for the rest of the game. The College’s large deficit stripped it of any opportunity to rely on its running game and the Hokies blitzed constantly, overwhelming Cluley and his offensive line. After completing five of nine passes in the first half, Cluley missed on five straight tries to start the second half and finished with just eight completions in 21 attempts.

Although a Virginia Tech fumble gave the Tribe the ball at the Hokies’ 39, the College’s drive stalled at the 28 and resulted in another Carpenter field goal. Despite the kick cutting the lead to 20-9, the game continued in favor of the Hokies. Virginia Tech’s Shai McKenzie sprinted for a 39-yard touchdown and a 27-9 lead on the next possession. The Hokies eventually added a fourth quarter touchdown to provide the final score of 34-9.

The Tribe ran the ball well when given the opportunity, but its passing offense struggled for much of the game, and Cluley, despite a game effort, had no time to throw downfield.

“[The Hokies] were playing cover one and challenging us to beat them,” Cluley said. “We had a couple of big plays in the beginning, but we left some plays out there that could’ve been made.”

The Tribe will work to regroup Saturday, when it travels to Hampton, Va. to take on Hampton. The Tribe make its home debut Sept. 13, when it hosts Norfolk State at 7 p.m.