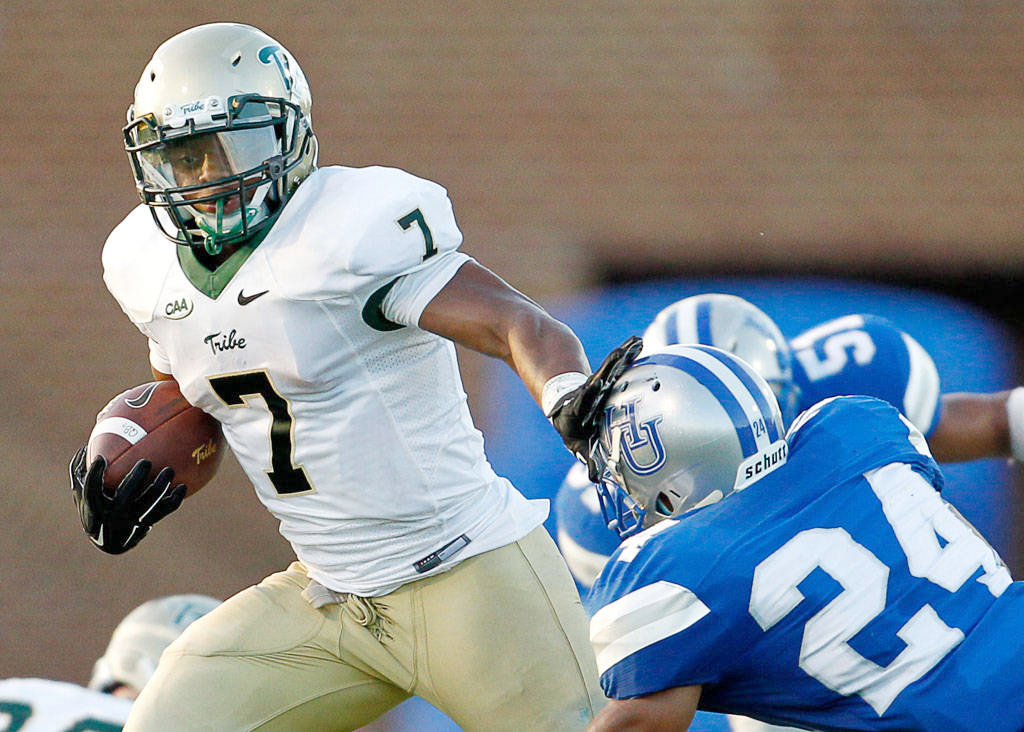 No. 21 William and Mary entered Saturday’s game against Hampton University looking for a win and an offensive spark. The Tribe found both by handing the ball to its running backs. The College (1-1) piled up 216 yards on 50 rushing attempts, sprinting its way to a 42-14 win in Hampton, Va.

“Offensively we ran the football pretty well, and that’s what we were looking to do going in,” head coach Jimmye Laycock told Tribe Athletics. “There’s some good things coming out of it. I feel like we have to play better, we’ve got some things we have to do.”

Junior running back Mikal Abdul-Saboor racked up 107 yards and three touchdowns, accounting for nearly a third of his team’s yardage. Sophomore quarterback Steve Cluley completed nine of 16 passes for 135 yards. Freshman receiver DeVonte Dedmon, starting in place of injured senior receiver Tre McBride, finished with 81 total yards, doing damage as both a pass-catcher and a runner.

Hampton received the opening kickoff, but gained just 20 yards before the Tribe forced a punt. The College quickly went to work with its running game, rushing nine times on its opening drive to work its way to the Hampton 16-yard line. Eventually the Pirates’ defense held, and the Tribe settled for senior kicker John Carpenter’s first field goal of the day to claim a 3-0 lead.

After the College’s defense smothered another Hampton drive, the Tribe took over at its own 41-yard line. Cluley completed two of three passes on the possession to lead the College to the Hampton 36-yard line, then handed control of the offense to Abdul-Saboor. The Tribe’s top back bullied his way to the end zone on his fourth carry of the drive, scoring from two yards out to stake the Tribe to a 10-0 lead as the first quarter wound down.

Hampton finally gained some ground on its ensuing drive, earning 49 yards before facing fourth and eight on the Tribe’s 32-yard line. Pirates quarterback Jaylian Williamson whipped a pass to Rashawn Proctor, but junior cornerback DeAndre Houston-Carson forced Proctor out of bounds to end the Pirates’ drive. The College quickly capitalized, as senior receiver Sean Ballard hauled in a 52-yard bomb from Cluley to bring the Tribe to the Hampton goal line. Sophomore running back Kendell Anderson scored on the next play to give the Tribe a 17-0 advantage.

The College continued to stifle Hampton for the remainder of the first half, holding the Pirates scoreless and picking up another field goal to ensure a 20-0 halftime lead. The half featured a Tribe team that dominated on both sides of the ball and built a lead that took pressure off Cluley. Abdul-Saboor paid tribute to his young offensive line after the game.

“I thought the offensive line played great all game,” he told Tribe Athletics. “We have a bunch of young guys, but they get better every week, and it starts with them in our running game, and I think they were able to handle the defensive line pretty well.”

The College appeared ready to finish off Hampton early in the second half, when it blocked the Pirates’ punt and recovered the ball on the Hampton three-yard line. Anderson lost the ball on his ensuing carry, though, and Hampton’s Marcus Wade recovered the fumble. The Pirates marched 99 yards in seven plays, finishing the drive with Christopher Dukes’ 54-yard touchdown run and cutting the Tribe lead to 20-7.

The Tribe responded well, however. Although its ensuing possession ended in three plays, Hampton’s Jordan Hill dropped the College’s punt, and Houston-Carson recovered the fumble to put the Tribe offense on the Hampton 15-yard line. Abdul-Saboor pushed his way into the end zone just seconds later, earning a 27-7 Tribe lead and keeping Hampton at bay.

Hampton’s Jorrian Washington kept his squad alive. After the Pirates had battled their way to midfield on their next possession, Washington caught a short pass from Williamson and sliced through the Tribe secondary, gaining 50 yards for Hampton’s second long touchdown of the day. Despite still leading 27-14, it was clear that the contest was far from over. Senior linebacker Airek Green attributed Hampton’s big plays to mental errors by the College’s defense.

“It was a little bit of [anxiety], we were overrunning a couple of plays … we’ve just got to be able to make those tackles,” Green told Tribe Athletics.

Cluley came through in a critical time, completing four of his next five passes — including a crucial 19 yard third down conversion to Dedmon — to set up Abdul-Saboor’s one-yard touchdown. Cluley then found sophomore tight end Eric Hensley for a two-point conversion to give the Tribe a 35-14 lead with just 12 minutes left in the game.

Hampton was once again undaunted. The Pirates answered with a 91-yard drive, including a 53-yard pass from Williamson that placed the ball on the Tribe’s goal line. Just as Dukes was forcing his way into the end zone, junior linebacker Luke Rhodes ripped the ball from his hands. The ball flipped through the air and landed in senior safety Ivan Tagoe’s grasp.

The Tribe captain sprinted down the field for 63 yards before he was finally taken down at the Hampton 37 yard line. The College eased its way to a score with eight rushes, eating four minutes off the game clock and building its lead to 42-14 with Anderson’s second score of the night.

When the dust cleared, the Pirates out-gained the Tribe 442 to 351 yards. The Tribe compensated for the discrepancy with a blocked punt and two forced turnovers. Green led the way on defense with six tackles, two sacks, a blocked punt and a forced fumble. Senior defensive end Mike Reilly stood out with two sacks, keeping Williamson on edge all night.

The Tribe’s win gives it positive momentum going into next weekend’s home opener, where it will look to start 2-1 for a second consecutive season. The College hosts Norfolk State Saturday at Zable Stadium, with kickoff set for 7 p.m.