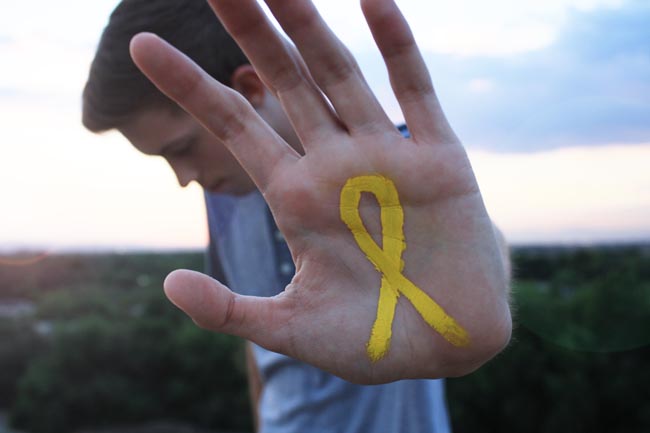 Nothing is more tragic for society than the death of a young person. Making this tragedy even worse is a young person dying by his or her own hand. In the United States, suicide is the leading cause of death among college students. In 2010, approximately 10.5 suicides were completed per 100,000 people aged 15 to 24. This represents the third leading cause of death for this age group.

Suicidal behavior actually includes four behaviors: suicidal ideation (thinking about killing oneself), gestures (engaging in behaviors that are self-harming, but not necessarily lethal), attempts (making legitimate efforts to kill oneself that fail) and completions (dying by suicide). What can we do to reduce the suicidal behavior of college students? This is the critical question being asked worldwide.

With this past Wednesday being World Suicide Prevention Day, I thought that this is an appropriate time to share some information about suicide prevention. An important fact to help give some context is that, while many people have engaged in suicide ideation, very few have gestured or made attempts to kill themselves. An even smaller group has been successful. There are several significant risk factors for suicide. The first are psychiatric disorders such as depression and anxiety. This is referred to as co-morbidity and is very strongly associated with attempts and completions. The next risk factor is substance abuse. This can vary in type, but alcohol and other popular depressants are the more common types. A person’s cognitive and personality factors, such as hopelessness, coping skills and neuroticism, are also associated with suicidal behavior. The fourth risk factor is aggressive-impulsive behavior. A person’s sexual orientation (e.g. homosexual, bisexual) is considered a risk factor as well. However, it is not being homosexual or bisexual per se that is the risk factor, but rather it is the lived experience of this group of people in a particular society.  The next risk factor is being a friend or family member of someone with suicidal behavior. Parental psychopathology (e.g. depression or substance abuse) is also associated with suicidal behavior. Stressful life circumstances such as interpersonal loss, or legal/disciplinary problems are risk factors. The glamorization of suicide through media coverage can be a risk factor. And finally, access to lethal methods of killing oneself (e.g. firearms) is a significant risk factor of suicidal behavior.

What can we do to help reduce suicidal behavior? The first step is to arm yourself with good information. For example, an email was distributed to the College of William and Mary community on Aug. 25 on behalf of Student Affairs that contains excellent ideas for suicide prevention. My strongest recommendation to you is, “When in doubt, act!” By this I mean that, as a caring person, you can tell when another is feeling distress. Drop any concerns you might have about causing a suicide by asking about it. This is a myth. Also, do not expect yourself to be an expert on this topic. Very few people are. We have experts in place. What is needed is that you look for distress in others, including overindulgence in alcohol or other drugs, hopelessness, talk about suicide or feelings of worthlessness or hopelessness. If you are close enough to the person to note significant changes in behavior, significant relationship problems, the occurrence of suicide in that person’s family, or other indicators of distress, be aware that these are also associated with suicidal behavior.

To help a person who is thinking about suicide, it is important that you act. It is much better to be too early in seeking care than too late. Remember, your role is not the last step in the process, but it may be first step to help the person you are concerned about. The following is the list of contacts provided in the campus-wide email from Student Affairs on Aug. 25. This provides an excellent place to start.

After hours, the evening dispatcher at the police department coordinates communication with all on-call professionals, including residence life staff, the dean on call, and the counselor on call. Or use the “Report Issues and Concerns” button on the Dean of Students webpage.

You can also seek more information from the “At Risk: Friends in College” online training module.

No life is beyond repair, as those who begin down the path of suicidal thoughts may come to believe. With good information and a willingness to act, we can help our fellow College community members back to a healthy state of mind.