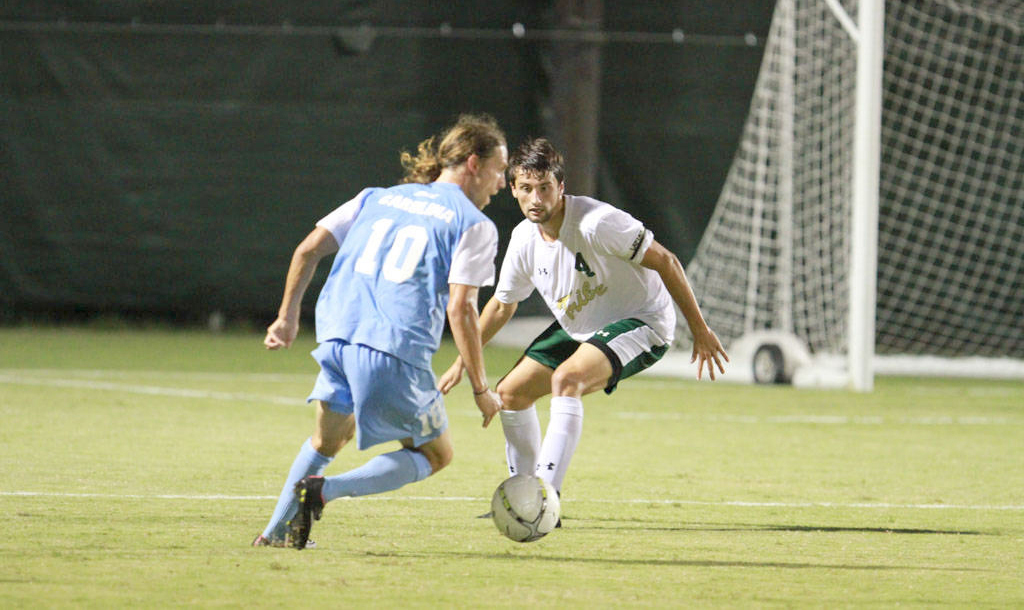 William and Mary let in an early North Carolina goal Monday night, setting the tone for a 2-0 home defeat. The Tar Heels are ranked No. 1 in National Collegiate Athletic Association poll, and the Tribe’s competitive performance somewhat soothed the loss.

“First of all, North Carolina is a really good team, and I think that they have a chance to have a pretty special year,” head coach Chris Norris said. “Despite losing the game, there are a lot of things we can be happy about our performance. I think we started the game well. Guys really fought hard early on and did a good job of trying to execute the plan that we gave them.”

The Tribe (2-4-0) threatened two minutes in when senior forward Chris Albiston found the ball in the box and shot on goal. A defender turned away the stray shot, as well as the rest of the Tribe’s early chances.

The Tar Heels (5-1-0) scored a quick goal off a corner kick from midfielder Omar Holness, following a breakdown in the Tribe defense. Though the goal was sudden and triggered a larger momentum shift, the Tribe kept pushing for chances on the other end throughout the half. Junior Jackson Eskay, who has split time between midfield and forward this season after leading the team in goals last season, stalked UNC’s defensive third with several steals and half-chances. Eskay’s daring efforts through the second half were spoiled by a vigilant defense that had settled further back following the Tar Heels’ first goal. Ultimately Eskay, the player who scored the decisive goal in the Tribe’s 1-0 triumph over the Tar Heels last season in Chapel Hill, couldn’t find answers Monday.

An early goal for the top-ranked team in the nation made for a daunting task, and a second goal made that task even more unlikely, especially against a team that has only allowed two goals so far in the entire season. Tar Heels forward Andy Craven received the ball in the box in the 30th minute, marked closely by senior defender Michael Teiman. Whirling around in a flash, Craven outmaneuvered Teiman for a wide-open shot against senior goalkeeper Bennett Jones. His shot slotted past Jones, and the Tribe sunk deeper.

The College fell back on its defense to start the second half, as UNC took the first five shots and would go on to outshoot the Tribe 12 to 3 in the half. Four of the Tar Heels’ shots were on target, though Jones saved each of them, part of his six saves in the match. A late substitute in the first half, sophomore forward Reilly Maw found an opportunity in the 80th minute and put a shot on target. UNC goalie Brendan Moore snuffed it, cementing his fourth straight clean sheet. The Tribe tallied just seven shots compared to the Tar Heels’ 19.

“Overall I’m frustrated and disappointed with the result — frustrated with the goals we conceded, but happy with the attitude of the team and the overall performance,” Norris said.

After taking down three ranked teams last season, the Tribe heads to No. 13 Georgetown Sunday for another bid at a big upset.

“Our guys know what Georgetown is going to be like,” Norris said. “We play a very tough schedule year-in and year-out, so hopefully we’ll be positive about that opportunity.”

The match is scheduled to start at 4 p.m.