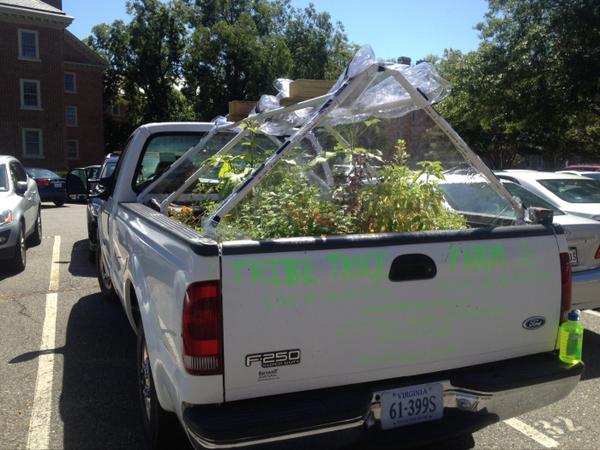 If a stranger ever invites you out to a truck behind the Commons Dining Hall while offering you a treat, few would fault you for calling the cops and running in the opposite direction. If the strangers who approach you are Nicole Broder ’15 and Jes Carr ’15, however, it’s probably safe to put your phone away, since the treat they’re offering is most likely just a fresh tomato or some mint leaves.

Broder and Carr’s Tribe Truck Farm at the College of William and Mary is a project that recently sprouted on campus after entering its seedling stage in the summer of 2012. Perhaps anachronistically, Broder and Carr are hoping it will take root in the upcoming year.

“What it is, basically, is a mobile garden in the bed of a pickup truck, the idea being educational outreach and growing your own food, and the ‘If I can grow this out of my truck, you can grow it anywhere’ type of idea,” Carr said.

The truck, which they found on Craigslist, came with a regular diesel fuel engine. Broder and Carr tinkered with the engine so that it could also run on waste vegetable oil. With the combination of fuel types, the engine gets the same mileage as it did before the conversion, but uses less gas and makes use of a byproduct that would normally go to waste.

If the mental image of a garden in the back of a truck is jarring, that’s because it’s supposed to be. Broder said that this odd coupling is part of what makes truck farms such effective educational tools.

“There’s an idea that agriculture in the world or in America is just these massive acres and acres of monoculture, and that’s how we think of how food is grown, but that’s not necessarily the only way that it can be grown or the best way for it to be grown,” Broder said. “So the idea of the truck being kind of a weird thing is just one reason in itself, and the other being that a lot of people don’t have access to even fresh food in grocery stores. So being able to drive an actual garden to conceivably anywhere, to go meet the kids or meet people who don’t have access, is cool that they can now have that personal interaction with the garden.”

Broder and Carr have not begun their educational outreach yet, but are in the process of contacting local schools. However, while the College and the Williamsburg community are only now being introduced to the Tribe Truck Farm, Broder and Carr have seen it through from its conception. The project began during the summer after their freshman year, when Carr was on campus doing research and watched the documentary King Corn, which inspired her to think about farming in a new way.

The idea for the Tribe Truck Farm played to both of their interests in environmental science and agriculture. The part that was new to them was not farming, but funding. They applied for a Green Fee grant from the College Committee on Sustainability and started a Kickstarter campaign. They were denied the grant and fell short of their goal on Kickstarter, meaning that they received none of the money donors had offered.

The second time was the charm, however. After setting their crowdfunding sights lower, they secured $6,000 from Kickstarter and a Green Fee award to match it. Former Sustainability Fellow Patrick Foley ’12 oversaw their efforts.

“Tribe Truck Farm stood out to me because it was such a novel approach to environmental education,” Foley said in an email. “Many of our campus projects raise awareness of environmental issues, but the truck farm provides a hands-on opportunity for service. I worked with Nicole and Jes on securing funding for the project through Green Fees at W&M, as well as getting administrative support from the Committee on Sustainability. This project has the potential to benefit the campus and community for a long time moving forward. It’s personal for me because I see it as a part of my legacy now that I’m no longer at William and Mary.”

Environmental sustainability is at the heart of the project, but Broder and Carr are still grappling with a different form of sustainability: the project’s longevity at the College. They kept the project between themselves in its beginning stages, but now are beginning to think of ways open it up to the wider community, as either a student organization or a branch of the Student Environmental Action Coalition. Both said they see a real interest in sustainable food movements on campus, but that these movements lack cohesion and visibility.

“There’s a lot of cool stuff on this campus, but it’s a little bit disjointed, and maybe we’re just adding another joint that’s not connected,” Broder said. “But we’re hoping that what we’ll be able to do is, because the truck can go to wherever each of these things are, it will help provide this sort of connection, and a visual thing that people can think about and connect to when they think about food and sustainable agriculture specifically within the context of the William and Mary community.”