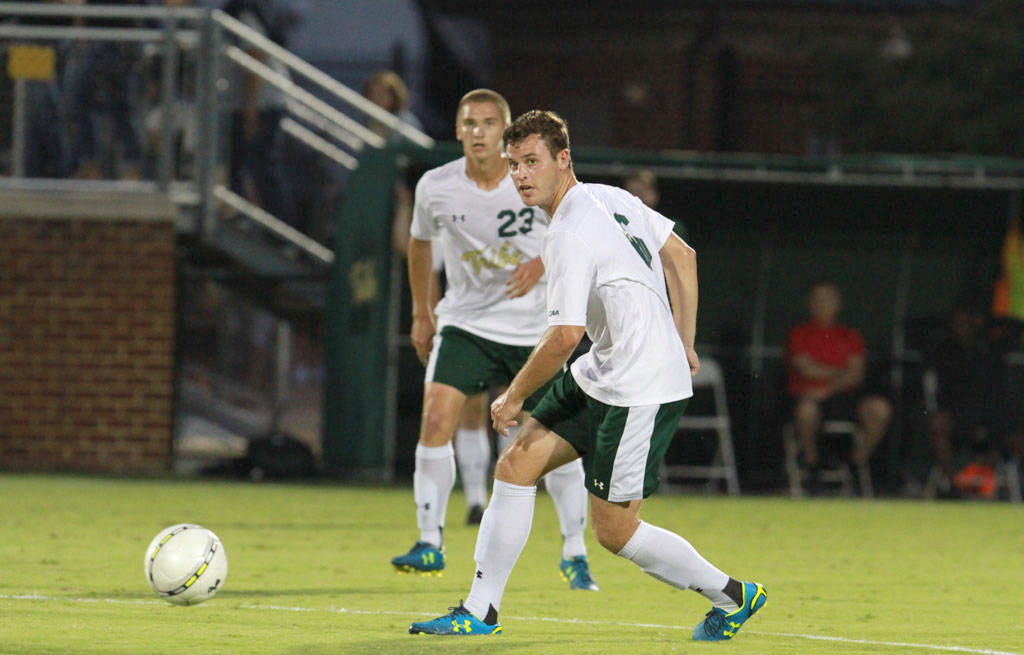 William and Mary lost its fifth match in six games, falling to North Carolina-Wilmington 1-0 Saturday night at Martin Family Stadium. After 102 minutes of a scoreless stalemate, the Tribe finally conceded a golden goal in the second overtime period in the team’s first Colonial Athletic Association match of the year.

“It’s disappointing, obviously, to lose in overtime, but Wilmington was a very good team, and they gave us everything we could handle,” head coach Chris Norris said. “In fairness, we played really hard and I thought we defended really well. We created a few situations but probably not enough to expect to win the game. But I think a draw would have been a fair result.”

Two minutes into the final overtime period, the Seahawks (7-1-1, 1-0 CAA) crossed the ball to the right side of the College’s box off a free kick. Two players sought possession, but Seahawks forward Mateo Cardona got to the pass first, cleanly swiping it past a lunging Tribe defender for an open shot on goal. Cardona’s shot passed senior goalkeeper Bennett Jones for the lone goal of the game. The 1-0 loss drops the Tribe to 3-6 overall and 0-1 in conference.

The majority of the game’s action took place in the middle third of the field, as both teams traded possessions and largely limited scoring chances. The Tribe produced two shots on goal, one of which came from freshman midfielder Jackson Eskay as the last seconds of the first overtime period ticked down. The Seahawks finished with four shots on goal.

The Seahawks’s victory was their fifth straight, a streak which includes three wins over ranked opponents. The Seahawks came into the game fresh off a 2-1 win over No. 23 Duke. The Tribe’s loss is its fifth over the past six matches.

Although the College’s defense held strong, the Seahawks earned twelve corner kicks, accounting for most of their chances. The College earned just two corner kicks as its possession on the offensive third was a rare sight for most of the match. Errant passes and forced volleys coupled with the Seahawk’s strong defense kept the Tribe’s offense off-balance.

The College did have a few semi-promising opportunities to break through. The first came in the 23rd minute as senior forward Chris Albiston found space on a counterattack and penetrated the Seahawks’ goal box. Albiston’s open angle closed down quickly, however, and his shot was shanked far to the right. Albiston had another breakaway into the box nine minutes into the first overtime period, evoking a spontaneous buzz from the crowd, but he failed to fire a shot.

The College’s offensive slump fit into an increasingly gloomy pattern, as it marked the team’s fifth shutout loss in its past six matches. After the game, Norris laid out intended offensive improvements.

“One, I think we[’ve] got to do better getting some width, especially against a team that is organized defensively like Wilmington,” Norris said. “We didn’t do a good enough job of getting the ball wide and getting service into the box. Secondly, the players have to do a better job of playing simply and combining. There’s not enough rhythm. There’s not enough flow. There’s too many turnovers. They’re all very good players, but I think we just need to get back to basics a little bit.”

As the first period of overtime faded into frustration, the second barely began before the Seahawks ended it. The suddenness of the strike — especially after over 100 minutes of clenched-teeth defense — left the Tribe with a tough start to its conference season.

The College hits the road to take on No. 21 Charlotte (6-1) Tuesday. The match is scheduled to start at 7 p.m.