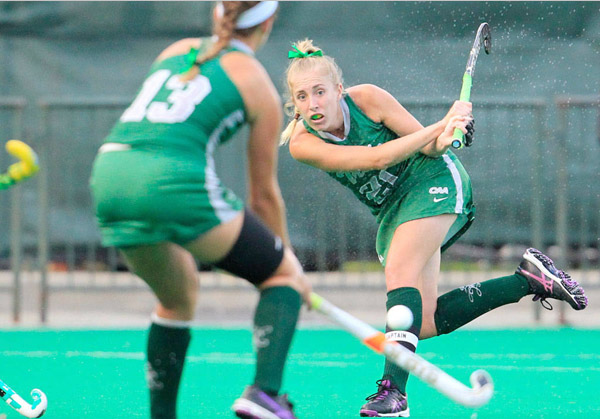 Stuck in the middle of a nightmarish season, William and Mary found the light with two wins this weekend. The College roared past Appalachian State, 8-4, Friday before shutting out Davidson, 2-0, Sunday. Both victories took place on the road and give the Tribe (3-7) some semblance of momentum as it approaches the conference season.

The College got off to a bleak start against Appalachian State, as the Mountaineers drew first blood with a goal in the seventh minute to leave the Tribe with a 1-0 deficit. The College rebounded quickly, however, tying the game 1-1 with freshman midfielder Erin Menges’s goal three minutes later.

The squads traded possession for several minutes, but the Tribe struck again in the 22nd minute when junior forward Pippin Saunders corralled a rebound off the goalpost and fired a shot. Saunders’s goal staked the Tribe to a 2-1 lead that it held until halftime.

The scoring ramped up after intermission, as senior forward Lindsey Buckheit took a pass from senior defender Navneet Singh and fired a strike into the net. Though the Mountaineers scored just three minutes later, Buckheit’s goal provided the Tribe a 3-2 lead in the 39th minute.

The contest then tilted irreversibly in the College’s favor. The Tribe scored five unanswered goals, building the lead to 8-2 by the 63rd minute with an offensive onslaught. Menges and Saunders each scored a second goal, and senior midfielders Emma Clifton and Brittany Hopkins and sophomore midfielder Mary Flick each added a goal to the Tribe’s mammoth tally.

Although the Mountaineers scrambled for two goals late in the game, the Tribe’s damage had been done and the game concluded with an 8-4 victory. The Tribe’s eight goals is a season high — in the eight games prior, the College had only scored nine goals combined. The win was the Tribe’s first triumph since Sept. 5, and it snapped a losing streak of five matches.

In stark contrast to Friday’s scoring explosion, the College’s win over Davidson was a tense, defensive affair. The combatants traded possession for several minutes at the onset. The Wildcats began with three shots in the first four minutes of action before the College quickly matched with three of its own. The Tribe finally connected in the 16th minute, as Buckheit swept a score into the net with an assist from Flick. The score gave the Tribe a 1-0 advantage.

After the College gained its lead, the two sides failed to score for the next 43 minutes, a drought that stretched across halftime and into the late stages of the game. The Tribe added an insurance goal in the 59th minute, when sophomore Maria Pastor took an assist from Singh and fired a shot into the net for a 2-0 lead. The College held the shutout for the remaining 11 minutes of game play to seal its second consecutive victory.

Despite only mustering two goals in the contest, the Tribe out-shot the Wildcats 18-7 and placed 12 shots on target. Only a strong performance from Davidson’s Emily Leytham, who logged 10 saves, stopped the Tribe from running amok offensively for a second straight match.

With a 2-0 showing over the weekend, the Tribe has won consecutive matches for the first time of the season. The College now turns to its conference schedule, with six of its next eight matches coming against Colonial Athletic Association opponents.