William and Mary had mixed results to open its Colonial Athletic Association conference schedule over the weekend home stand. The College notched a resounding 4-0 victory over Towson Friday before losing to Delaware, 5-3, Sunday.

Still, the College’s Friday victory was significant. Taking a 1-0 lead only a couple of minutes into the game, the Tribe (4-8, 1-0 CAA) quickly showed Towson (2-7, 0-1) that it could compete. Head coach Tess Ellis was encouraged by her squad’s effort Friday.

“When you get off to a good start in the first seven to eight minutes, the other team goes back on their heels a bit and realizes, ‘Hey, these girls can play field hockey,’” Ellis said. “Now [with three wins in a row,] it’s a brand new season.”

Junior forward Pippin Saunders struck first for the College, receiving a pass from senior defender Navnet Singh and launching a shot into the top of the goal for a 1-0 lead in the third minute. From there, the Tribe continued to pressure the Tigers, keeping the ball entirely on the Tigers’ half with impressive passing for the next ten minutes. Even then, a lone Towson fast break was quickly tracked down by an energized and swarming Tribe defense.

“I think the difference today was that we just wanted it more,” senior forward Emma Clifton said. 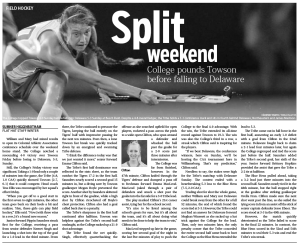 The Tribe’s first half dominance was reflected in the stats sheet, as the team outshot the Tigers 17-2 in the first half. Saunders nearly scored a second goal 15 minutes in, but a diving save by Towson goalkeeper Megan Boyle prevented the score. Another shot by Saunders skittered right in front of the goaline, while a high shot by Clifton ricocheted off Boyle’s chest protection. Clifton also had a goal called back due to a penalty.

The Tribe’s sharpness in the first half continued after halftime. Towson was helpless against the Tribe’s second-half onslaught, as the College racked up a 21-0 shot advantage.

The Tribe found the net quickly. Singh, effectively quarterbacking the offense as she searched upfield for open players, rocketed a pass across the pitch to a wide open Clifton, who spun around a defender and whacked the ball past the goalie for a 2-0 score just three minutes after intermission.

The College was far from finished, however. In the 47th minute, Clifton knifed through the Tigers’ defense and dumped a pass off to freshman forward Emma MacLeod. MacLeod juked through a pair of defenders and snuck a shot past the goalie into the far side for a 3-0 Tribe lead.

The play marked Clifton’s 21st career assist, tying her for the school record.

“It’s nice to be listed among the school’s greats for sure, but it’s all about the team, and it’s all about doing what needs to be done to help the team to win,” Clifton said.

MacLeod stepped up late in the game, scoring her second goal of the night in the last five minutes of play to push the College to the final 4-0 advantage. With the win, the Tribe extended its all-time record against Towson to 19-3. The win was also the College’s third in a row, a streak which Clifton said is inspiring for the players.

“If we beat Delaware, the conference winners, here on Sunday, we’ll be hosting the CAA tournament here in Williamsburg. That’s my prediction,” Clifton said.

Needless to say, the stakes were high for the Tribe’s matchup with Delaware Sunday. The contest ended with a heartbreaking 5-3 loss to the Blue Hens (7-5, 2-0 CAA).

Trading shot for shot the whole game, neither William and Mary nor Delaware could break away from the other for a full 52 minutes, the end of which found the score tied at 3-3. However, the Tribe could not find an answer for Delaware forward Meghan Winesett as she racked up a hat trick against the College for the lead. Then, only two minutes later, the only penalty corner that the Tribe conceded the entire second half came back to hurt the College as the Blue Hens extended the lead to 5-3.

The Tribe came out in full force in the first half, answering an early 1-0 deficit with a goal from Clifton in the 22nd minute. Delaware fought back to claim a 2-1 lead four minutes later, but again the College regrouped and tied the score just before the half. Saunders added the Tribe’s second goal, her sixth of the year. Senior forward Brittney Hopkins provided the assist that gave the Tribe a 2-2 tie at halftime.

The Blue Hens pulled ahead, taking a 3-2 lead just three minutes into the second half. Saunders nearly tied it in the 48th minute, but the ball stopped right at the goaline after striking goalkeeper Orella Fran. Clifton made sure the next shot went past the line, as she sailed the tying score in from an assist off the stick of senior captain defender Jesse Ebner. The score stood at 3-3 in the 49th minute.

However, the match quickly deteriorated as the Tribe failed to score in the final 22 minutes. In contrast, the Blue Hens scored in the 52nd and 54th minutes to seal their 5-3 win and end the Tribe’s win streak.

Up next for the College is another important CAA matchup against JMU (7-3, 1-1 CAA) in Harrisonburg at 2 p.m. next Sunday.