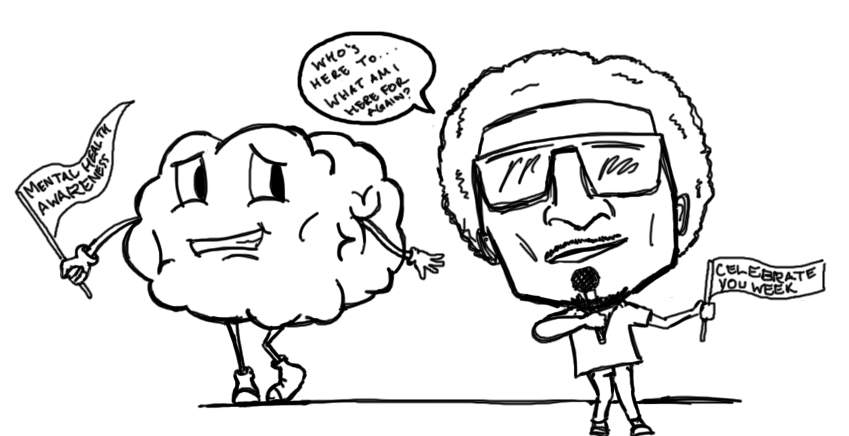 Mental Health Awareness Week gave the College of William and Mary community a unique opportunity to publicly discuss mental illness. It was a focused effort to promote awareness, and it succeeded admirably. Only a few days later, the Student Assembly announced the Celebrate You initiative, an attempt to promote general wellness and positivity the week after Homecoming. The initiative will conclude with a Shwayze concert. However, we believe that Celebrate You is scheduled too close to Mental Health Awareness Week and lacks clearly defined goals. Furthermore, Shwayze is obscure — and his connection to wellness appears to be non-existent.

No one would argue that promoting wellness and positivity on campus is a bad thing. Students should be encouraged to stay healthy and feel good about themselves. That said, the Celebrate You initiative feels shapeless and lacks a clear purpose. Wellness and positivity are amorphous buzzwords which don’t mean much on their own. Issues of physical and mental health, self-image and self-worth are extremely important and worth discussing, but not in a generic and vague way. What, exactly, is the Celebrate You initiative promoting? How will it be different from Mental Health Awareness week? The SA, AMP, IFC and HOPE need to explain this.

Even if its goals are clearly articulated, Celebrate You will still be redundant and superfluous as it occurs immediately after Mental Health Awareness Week. Weeklong initiatives are effective in small doses — throw them at students constantly and they will lose their effect. Mental Health Awareness Week worked because it brought so many different student communities together. Students will not have the same vigor and enthusiasm for a similar event only three weeks later.

Now, let’s talk about Shwayze. There is a good chance you needed to Google him just now. The decision to book Shwayze, a nearly unrecognizable artist with no tangible connection to health issues, is baffling. First, obscure artists tend to be polarizing. Students who do not like Shwayze, or, more likely, have never heard of him, will feel excluded. The concert will not be a moment of unity if it attracts only a handful of drunk Shwayze fans.

Second, how will this concert relate to wellness and positivity? Shwayze’s most well-known music videos feature thin, scantily-clad women and lyrics like “Girls from New York look like giraffes,/ Long neck long legs tiny tits and ass.” As far as we know, Shwayze does not advocate for mental health awareness, and he does not advocate for issues involving body-image or self-esteem.

Third, the Shwayze concert will cost around $20,000. Tickets are free and $10 donations to the American Foundation for Suicide Prevention are encouraged. Why not simply donate the $20,000 and skip the concert, which lacks any apparent connection to suicide prevention? Or hire a well-known artist or speaker who does promote mental health. With better long-term planning and organization, this would be possible.

The Celebrate You initiative and the Shwayze concert are only worthwhile if they have a clear purpose. If the SA, AMP and IFC are serious about using Celebrate You to educate students, they should let HOPE lead it. And dump Shwayze.