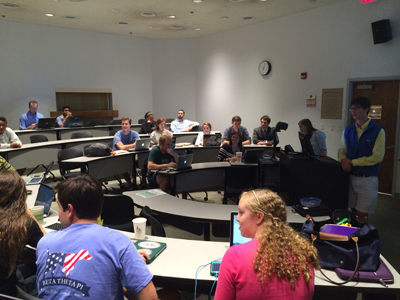 In their last meeting before fall break, the Student Assembly Senate passed the Celebrate You Initiative Programming Act following a senate-wide discussion.

After sponsor Sen. James Walker ’15 introduced the bill under new business, Chairman of the Senate Daniel Ackerman ’16 moved the Senate into a short recess to allow the Finance and Outreach committees to unofficially review the bill.

The Celebrate You Initiative Programming Act allocates $300 to fund “wellness-related programming,” which includes a sketch comedy group leading a workshop and a frozen yogurt topping bar. The Celebrate You initiative, sponsored by the SA, AMP, Health Outreach Peer Educators and Inter-Fraternity Council, will be held Oct. 20-25 and is meant to promote holistic wellness on campus.

Once the Senate reconvened after its recess, the bill was moved to old business due to its time-sensitive nature. Sen. Nadia Illunga ’15 expressed concern over the close proximity and nature of Mental Health Awareness week and the Celebrate You Initiative.

“[The Outreach committee] had some concerns about the week-long initiative being effective, especially given [that] there’s a lot of overlap with this idea and mental health, [and] we just had a mental health awareness week,” Illunga said.

Illunga suggested containing the initiative to programming on just Friday and Saturday in order to make it more efficient.

Sen. Michelle Tansey ’15 reiterated these concerns, questioning whether this programming was misdirected. To gain clarification, Sen. Yohance Whitaker ’16 called Secretary of Health and Safety Andrea Aron-Schiavone ’15 and asked her to answer senators’ questions regarding programming over speakerphone. Aron-Schiavone explained that all of the sponsoring organizations will be putting on programming throughout the week-long initiative.

Sen. Danny O’Dea ’18 voiced his support for the bill, explaining that the Celebrate You initiative will take a different tone than Mental Health Awareness Week.

“This is … a really positive outlook on an issue that is often seen with a very heavy mindset, and it’s good to have that mindset,” O’Dea said.

Whitaker explained that the Senate should fund this bill, as the Senate requested that the Executive Branch put on programming in conjunction with the Celebrate You concert.

“[The] finance committee thought that it would only be right to fund these programs. This is what we asked the Executive Branch to do when we passed the act bringing Shwayze to campus,” Whitaker said.

The Senate also passed the Make it Rain Act, sponsored by Whitaker. The bill allocates $10,000 to bring a speaker to campus to discuss spirituality and philosophy. President of the Class of 2017 Phoebe Galt ’17 voiced her support for the act, and said she sees it as a good next step after receiving the results of the Campus Religious and Spirituality Climate Survey implemented last spring.

“This is something that is directly following from that survey. … I think that this is really great, because it’s taking those results and turning them into an actual program that we can now do to help our students based off [of] what we learned form that survey,” Galt said. “It’s really great to continue something we already started.”

After more discussion, the Senate passed the Washington, D.C. Thanksgiving Break Act, sponsored by Ackerman and O’Dea. The bill is formatted much like the Washington, D.C. Fall Break Act, but with a few alterations. The bill for Thanksgiving break will only fund one bus and student tickets will not be subsidized. O’Dea explained that the Senate was going to test the student body’s demand for unsubsidized tickets.

Sen. Chase Jordan ’15 was a major proponent of the bill.

“I think this is one of the most profound and well thought out bills that has been floated around the Student Assembly. We have a very strong economic, academic foundation on which to pass this bill,” Jordan said. “Furthermore, I believe our student body will enjoy [the] robust activity and planning the Senate is providing.”

At its Oct. 7 meeting, the Senate also informally elected a new representative to the Undergraduate Council. Sen. James Shaw ’18 was elected unopposed.

Ackerman explained that it could be beneficial to have a newer senator serve as representative.

“I think that sometimes it’s nice to have a more recently elected senator as our representative, because I think that’s somebody that will have a whole new world open to them at their 6:00 undergrad meetings,” Ackerman said. “It’s someone who will be able to relay the inside of undergrad under Giorgio [Caterini]’s hand and let us know what he’s up to.”