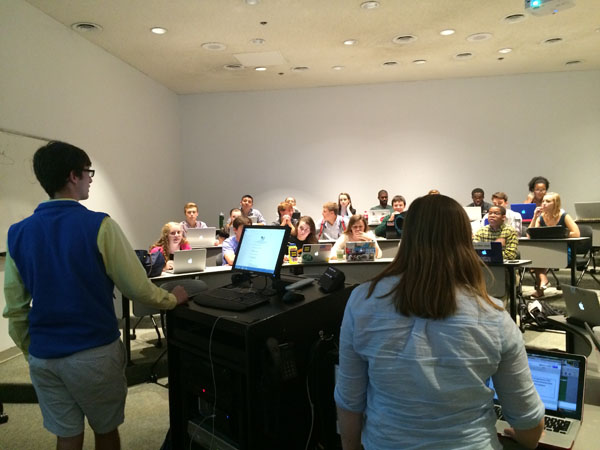 In their shortest meeting of the semester thus far, senators passed the GOTV (GetOutTheVote) Act, sponsored by Sen. Emily Thomas ’17.

The bill allocates $168 to print 2,800 election flyers and $24 to print 200 brochures containing non-partisan information about the candidates. The bill requests less funding this year than it has in years past. The bill also received positive unanimous recommendations from the Senate’s Public Affairs, Finance and Policy committees.

The bill estimates that 400 new students at the College of William and Mary registered to vote.

President of the Class of 2017 Phoebe Galt raised concerns that mixed messages would be sent to the student body if the SA did not collaborate with other student organizations’ voter registration efforts.

Thomas explained that the SA does coordinate with Virginia 21, a non-partisan organization that works to support and educate young voters. Secretary of Public Affairs Scott Caravello ’15 explained, however, that the SA does not partner with organizations like College Republicans or Young Democrats because they are partisan groups.

“Virginia 21 is a big one that we are partnering with,” Caravello said. “There have been some other organizations that we have spoken to, but we have made the decision not to partner with them. We feel that [not partnering with those organizations] is actually avoiding mixed messages.”

Sen. Yohance Whitaker ’16 voiced his support for the GOTV efforts.

“I feel it’s really important that we encourage students to vote, especially since SA is first a student advocacy group. So we want [to] make sure … student voices are heard at the College, but also at our state and federal elections,” Whitaker said.

Whitaker introduced the Debt Limit Crisis of 2014 Act under new business. The bill postpones the deadline for the budget to be presented to the president of the SA. The deadline is being pushed back because the College’s winter break is longer this year than in years past.

The Code dictates that the Executive Appropriations Committee presents the budget to the president by Feb. 1. However, that deadline does not give the EAC enough time to meet with all the different organizations that apply for funding between the end of winter break and Feb. 1.

The Debt Limit Crisis of 2014 Act will edit the Code to extend the deadline.

Chairman of the Senate Daniel Ackerman ’16 assigned the bill to the finance and policy committees.

The Interfaith Speaker Act of 2014 was also introduced at Tuesday’s Senate meeting. The bill funds a speaker coming to campus to address interfaith topics. The event is tentatively scheduled for Nov. 17. The College’s Muslim Student Association approached the SA with the idea for the event.

“The president of MSA … and the members of MSA came to me because they were working on putting together a speaker event,” SA Vice President Kendall Lorenzen ’15 said. “The speaker kind of specializes on interfaith topics, and [the MSA is] hoping to bring him here and … co-sponsor it with the Student Assembly.”

The senate approved the nomination of Graham Connors ’18 to the position of undersecretary for voter registration. Connors highlighted his previous experience with voter registration, as well as a six-month internship he completed at the US Senate while in high school. Thomas voiced her support for Connors.

“There’s no reason I feel not to approve Graham,” Thomas said. “As Scott kind of touched on, this is a time-sensitive role. We have elections coming up in the next week … We’ve already started GetOutTheVote efforts, and Graham’s already done a great job stepping into the Public Affairs Department. He’s already a great fit.”