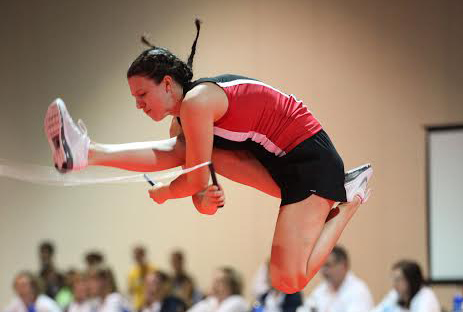 With jump ropes in hand, tall postures and wide smiles, Abigail Harrison ’18 and her two double Dutch teammates opened their winning jump rope routine at the National and World Jump Rope championships this past summer.

Harrison and her teammates in the Bainbridge Island Rope Skippers won the championships for both the USA National Championship and the World Jump Rope Championship in the three-person double Dutch 18-22 age bracket.

“It was really stressful, but it was worth it,” Harrison said. “It was the last year we were going to be ultra competitive in [jump roping], so … it was our last chance to win.”

At the tournaments, Harrison and her teammates competed in multiple circuits including single rope, pairs synchronized jumping and three-person double Dutch.

“It’s different than most sports because you do events by yourself, so you do single rope stuff, but then you also do events with other team members, like double Dutch,” Harrison said.

She started jump rope when she was five years old through small after-school classes, and she quickly developed a passion and skill for the sport that led to her joining the Bainbridge Island Rope Skippers when she was seven.

“There were girls on the team that I looked up to who were role models for me in the sport and other aspects,” Harrison said, “and I think when I first started going to competitions I just fell in love with it.”

Located in Bainbridge Island, Wash., the team is made up of members from elementary school through high school. Unlike seasonal sports, jump rope takes up most of the year with only a very brief off-season.

“You train starting in September [and go] all year … then competitions don’t start until March,” Harrison said. “You only have one big competition a year, which is really stressful because you train all year for one minute.”

From September to March, Harrison and her teammates spent their months of training developing their routines and perfecting tricks.

“We would normally practice four days a week, and we go 11 months a year,” Harrison said. “So that part of it is a big time commitment.”

The winning three-person double Dutch routine that Harrison and her teammates performed at the tournaments involved multiple original and unusual tricks for the sport.

Along with performing in Long Beach, Calif. for the National Championship and Orlando, Fla. for the World Jump Rope Championship, Harrison and her teammates were able to travel and participate in other jump rope workshops outside of Washington state.

“Starting two or three years ago, we were old enough and had a certain skill level where we could staff the workshops and get to teach younger jumpers,” Harrison said.

The ability to teach jump rope to younger jumpers, according to Harrison, shows a strong sense of community within the sport.

“The jump rope community is really cool because I was once the little jumper who looked up to the older jumpers, and now there’s little jumpers that I role model for,” Harrison said.

According to Harrison, high school graduations mark the departure of “graduating” teammates as they go elsewhere for college.

“It’s a lot harder to organize groups. but I’m hoping that we’ll be able to still jump for one or two more years,” Harrison said. “It is hard to practice away from them.”

According to Harrison, her participation in jump rope may have influenced her academic interests.

“I’m thinking about majoring in kinesiology, and that is probably because of jump rope and how it has affected my life,” Harrison said. “I think it has taught me about working with others, and there has been such a big leadership aspect in jump rope that I think has been really valuable to me.”