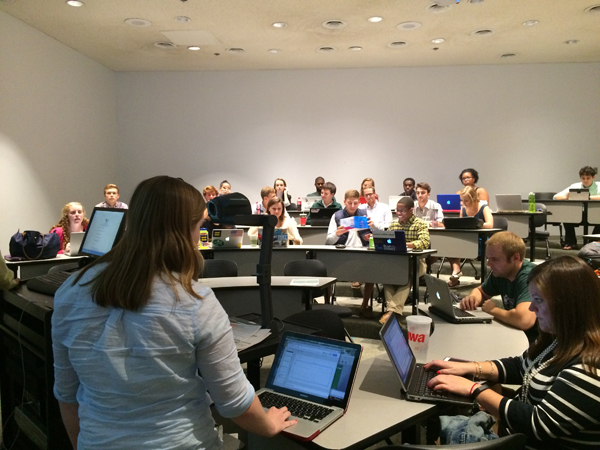 Nov. 18, the College of William and Mary’s Student Assembly senate heard the case of one senator who has surpassed three absences this semester.

“I would strongly recommend no action be taken … It’s simply a policy of the code that we talk to the senators once they have three absences,” Ackerman

Tansey took the floor during the SA meeting Tuesday night to discuss her three absences. The reasons ranged from personal to prior engagements.

Sen. Emily Thomas ’17 expressed her support for the decision to not take action regarding Tansey’s absences.

“From a secretarial standpoint, Michelle has been excellent about emailing me ahead of time,” Thomas said.

The other senator scheduled to explain her absences, Sen. Alaina Shreves ’18, was not in attendance during Tuesday’s meeting. According to Ackerman, Shreves was cheerleading at the men’s basketball game. Her practices have been scheduled during the same time as meetings.

“She’ll come in front of the senate and explain that later on,” Ackerman said.

The senate then received an update on Student Assembly subsidized STI test figures from Secretary of Health and Safety Andrea Aron-Schiavone ’15.

The Student Assembly allocated $20,000 for subsidized STI testing for the 2014-15 academic year. Aron-Schiavone informed the senate that $905 of the $20,000 was spent in September, and an additional $659 was spent in October.

“We’re just going to continue this until the $20,000 runs out, essentially,” Aron-Schiavone said.

The senate also discussed the retraction of the Baggage Claim Act, brought up under new business during the SA’s previous meeting. The bill would have provided for the transportation of baggage to the train station over Thanksgiving break.

“It sounded like a really good idea, but there were a lot of unforeseen costs,” the bill’s sponsor, Sen. Danny O’Dea ’18, said.

“The cost just didn’t seem to justify the actual service provided. … And upper administration didn’t like the idea, they thought it might be too much of a liability and too much of a cost,” Morey said.

This bill did spark discussion about possibly rerouting the green bus line during breaks to provide service to the train station.

“While this bill did not succeed in its own right, it did succeed in the fact that it created potential for a lot of good services to provide for the student body,” O’Dea said.

The Dance for Kids Act was also retracted. It was turned into an activities and events request, according to Ackerman.

Two new bills were brought up during new business during Tuesday’s meeting: the Beauty of Branding Act and the TEDx Fundraising Act 2015.

The Beauty of Branding Act — which Thomas sponsored — is designed to improve the SA’s marketing for events and services.

This bill allocates $6,000 from the Student Activities Reserve toward branding materials.

“It’s really important that the SA, within this next semester, starts really focusing on getting our name out at events that we host, and making sure that people understand the SA is the face behind a lot of things that go on,” Thomas said.

The TedX Fundraising Act 2015, sponsored by Sen. Chase Jordan ’15, will bring another TEDx conference to the College, allocating $13,250 from the Student Assembly Reserve.

“This is very similar to the bill that we passed last year,” Jordan said. “We’ve actually reduced the amount that we’re relying on the Student Assembly for.”