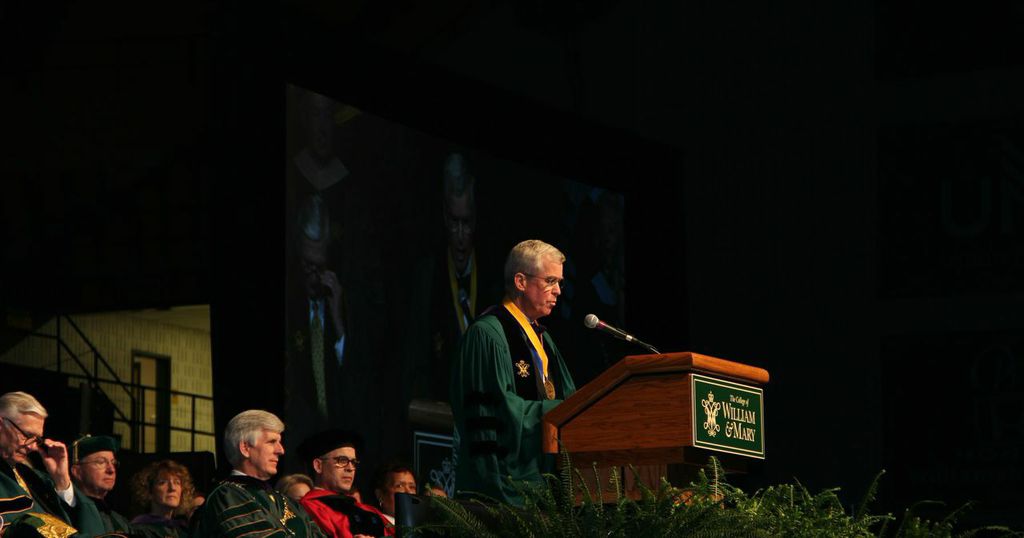 “Unless you’re Methuselah or perhaps a giant Redwood tree, 322 is really old, at least by human standards,” College President Taylor Reveley said in his remarks during the ceremony. “By 322, if you’re human, you’ve got no hair, no teeth, no nothing. But William and Mary, though created and sustained by humans, transcends human limits.”

Reveley described the College as indestructible, robust, and “one tough phoenix,” but also mentioned what he sees as the school’s most pressing philanthropic need: increasing the College’s scholarship endowments. In his introduction of Chancellor Robert Gates ’65 — who was on campus for the weekend’s events — Reveley emphasized that Gates attended the College after receiving a scholarship. While a student, Gates drove a local school bus to help pay for his education.

Referencing his own story, Gates also stressed the importance of scholarships in his speech.

“My brother and I were the first in the history of our family to attend college, and it was a scholarship that made it possible for me, a kid from Kansas, to come here, the alma mater of a nation,” Gates said. “It was an individual — just one — in the pantheon of William and Mary people, whose generosity helped make my William and Mary experience possible.”

Gates concluded his remarks by encouraging those gathered to consider how they could make a difference at the College.

Venture capitalist and former Rector of the College James B. Murray J.D. ’74 L.L.D. ’00 served as the ceremony’s main speaker, but did not address the College’s finances in his speech. Instead, Murray focused on the legacy of alumnus James Monroe, the fifth president of the United States. Monroe is often overlooked, Murray said, and yet students can take valuable lessons from his leadership in the early stages of the country.

“All Monroe’s nation-building accomplishments can be traced to his skill for compromise, his gift for finding common cause,” Murray said. “It was no coincidence that Monroe’s presidency launched the American Era of Good Feeling. … Where did he learn? Well, it began right here.”

Murray commended the College for its support of Monroe’s historic home and its involvement with the Presidential Precinct initiative.

Heein Choi ’17 served as the ceremony’s student speaker, offering his thoughts on the College’s charter.

“With every student that recites the honor code in Wren Chapel, William and Mary adds a new layer to its expanding definition,” Choi said. “William and Mary is defined by the people on this campus.”