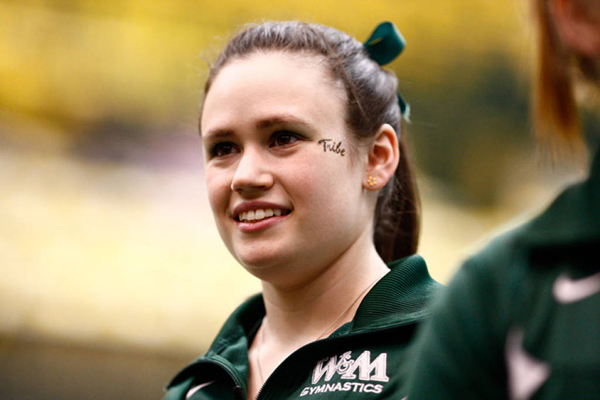 William and Mary left Chapel Hill, N.C. after posting its second-best point total of the season. The output was not enough, however, as the Tribe fell to North Carolina 194.435-192.800 Saturday afternoon.

The College has not won a meet since defeating Towson Jan. 17 in Williamsburg, Va. By contrast, the opposing Tar Heels have two wins and three second-place finishes in five meets this season; the road matchup in Chapel Hill promised to be a tough test for the College.

The Tribe’s performance did have multiple bright spots. Graduate student Larson Lasek scored a season high 9.750 on beam to led all competitors, and junior Brittany Stover claimed the event title in vault with a score of 9.875. Stover’s mark — just 0.125 points short of a perfect score — was the third-highest vault total in program history.

Buoyed by Stover’s performance, the Tribe had its best performance of the meet on vault. Lasek added a personal season high with 9.725, and the College totaled 48.450 as a squad, falling just short of UNC’s 48.800 score in the event.

Graduate student Larson Lasek scored a season high 9.750 on beam to led all competitors, and junior Brittany Stover claimed the event title in vault with a score of 9.875.

On the bars event, the College scored 48.100 against UNC’s 49.05. The bars were the Tar Heels’ highest scoring event of the meet, although Brittany Stover’s 9.700 and junior Alyssa Glass’ 9.650 kept the College within striking distance.

In the floor event, senior Maggie Lundeen led the Tribe with a 9.800, while Brittany Stover chipped in 9.675. The College notched a 48.050 as a team and Lundeen finished third among all individuals in the event.

Individually, Brittany Stover finished third in the meet, leading the College with a score of 38.850. She was one of three Tribe gymnasts to take part in all four events at the meet; Lasek scored a 38.725 and sophomore Olivia O’Connor recorded a 38.125. When all was said and done, the College finished the contest with a high score but a 1.625-point loss to the Tar Heels.

The Tribe will look to rebound from the loss when it travels to Raleigh, N.C. to take part in North Carolina State’s Sweetheart Invitational Feb. 14. The meet begins at 7 p.m.