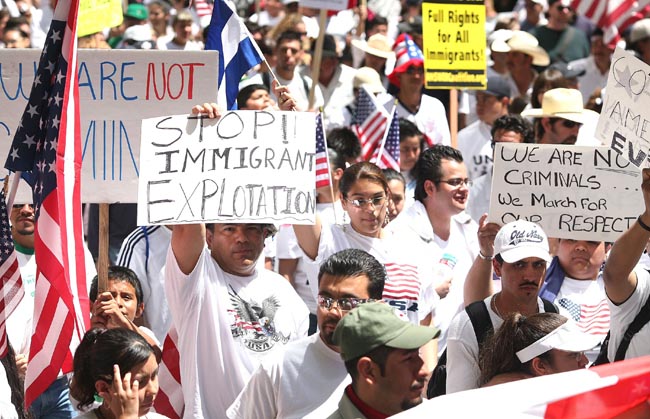 The recent ruling by federal judge Andrew Hanen against President Obama’s executive action on immigration has returned immigration to the forefront of national political discourse. While never absent from public consciousness, immigration has re-emerged as a potent and divisive issue. Obama’s policy would provide those who qualified with temporary protection from deportation and provide them with work permits. The executive order also covers undocumented immigrants who were brought to the U.S. as children, protecting them from legal limbo.

Limited in scope, the executive action has nevertheless drawn the fury of people who believe that the essence of their American identity will be diluted by the provision of basic services to people who don’t look like them. The debate over immigration, especially the immigration of people who don’t hold proper documentation, has inflamed a nerve at the core of the American psyche. The resulting conversation has been contentious. It has prompted deep public introspection, a reexamination of what it means to be American today. Something, however, is missing from the conversation. We need to have a conversation about words.

At the College of William and Mary, much has been made recently of political correctness, seen by some as necessary sensitivity and by others as superfluous. This conversation comes at a time in which issues of huge import — including race relations — have touched campus directly. In forums public and anonymous we have declared our opinions. Two general viewpoints have emerged: One group calls for cautious self-awareness, while the other decries what it sees as touchy white guilt.

Each side seems to agree that there is no more at stake in this argument than words and attitudes. Both views imply that sensitivity is, at best, a nice gesture, and that a lack of sensitivity doesn’t have any serious consequences. Absent is a sense of relevance, a sense of immediacy. Our campus debate has taken place in the immaterial realm of representation. We distance ourselves from the people about whom we speak. We prefer to euphemize. We would rather deal in abstractions than human lives.

Political dialogue runs a parallel course. Policymakers prefer to treat immigration as a distant phenomenon, a disembodied process that happens on unseen peripheries. Politicians speak about immigration in language that avoids talking about human lives. They brand immigrants as “illegals” or “aliens.” These words have become a default for many when talking about immigration, but their ubiquity doesn’t make them meaningless. These words have real, profound implications.

Words are not inconsequential. When politicians speak of “illegal aliens,” they imply that a certain group of people, because of the circumstances of their birth, does not deserve the security, health, education and prosperity necessary in American life. They suggest that “illegal” encompasses the whole of an immigrant’s identity and that the immigrant’s very existence is illegitimate. The terms overlook the humanity of those to whom they refer. They brush aside not only the stories of terrifying strife in Guatemala and economic collapse in Mexican farmlands, but also memories of family left behind and dreams for children yet to come.

Using the word “alien” is a way to make ourselves comfortable with the way things are, to assuage doubt over the mistreatment and constraint of others. The word normalizes imbalance and discourages sympathy. The same politicians that make laws affecting the livelihoods of immigrants attempt to place as much distance as possible between themselves and the consequences of their policy.

Political correctness is not about pure semantics. Words matter not just because they confer meaning, but because they also define the nature of our relationships with those around us. On campus we speak and act as though we exist in a vacuum. Yet this can never be true. Words will always find an ear and action will always find a heart. When we belittle or caricature, we keep problems abstract. We maintain distance. We secure unreality. Only when we recognize that we have an audience, and that the audience is just as complex as us, can we speak meaningfully.