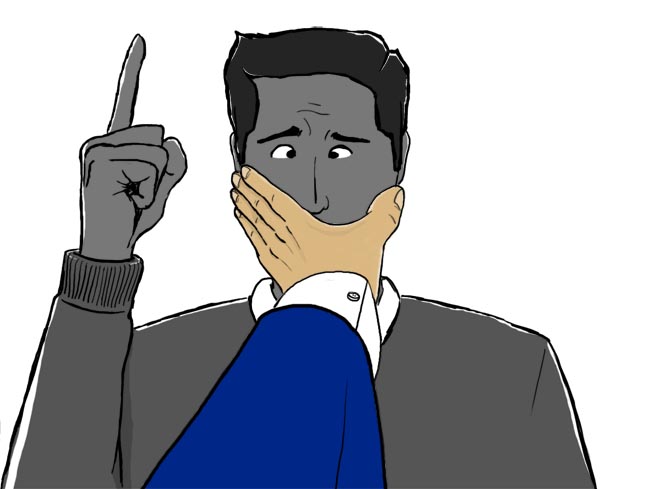 In 1988, the University of Michigan responded to a number of instances of racism against black students on campus by instituting a speech code. According to the ACLU, in the 18 months the policy was in effect, 20 black students were brought up on charges of using offensive speech against a white student, including the punishment of one black student for using the phrase “white trash.”

In the 1989 federal court decision Doe v. University of Michigan, this speech code was ruled to be unconstitutional. In later years, similar codes at the Universities of Connecticut and Wisconsin were also struck down.

This month, a proposal submitted by two students to the Board of Visitors, College President Taylor Reveley and other college administrators requests that the College of William and Mary adopt a speech code very similar to the ones that have failed at other institutions in the past.

Such a policy would make it possible to discipline students for voicing their opinions — and like the speech code imposed on the University of Michigan, it would inevitably hurt those it intends to help.

The proposal, titled “A Call to Community Action,” calls for a “zero tolerance policy” for acts of bias, which it defines as “a negative opinion or attitude toward a group of persons” based on a wide set of personal characteristics. The proposed policy would “classify bias incidents as a student conduct violation to be dealt with” through the student conduct process. The proposal suggests that punishments would likely take the form of “a warning, community service, or education on the offense” — but minor disciplinary action is still disciplinary action, and it is a problem any time a student is disciplined for voicing his or her opinion.

The policy would allow the College to punish speech that does not meet the legal definition of harassment. In Davis v. Monroe County Board of Education, former chancellor Justice Sandra Day O’Connor articulated the legal definition of harassment as conduct which is “so severe, pervasive, and objectively offensive … that the victims are effectively denied equal access to an institution’s resources and opportunities.” This is a far cry from how the proposal defines acts of bias.

This proposal would also set a dangerous precedent. The burden of proof would be on the accused, rather than the accuser — and if the accused cannot prove that “a bias incident did not occur,” the dispute would go to the student conduct council.

Azhar Majeed, a spokesman for the Foundation for Individual Rights in Education, said the new proposal would “be restrictive of students’ First Amendment rights” and threaten the College’s “green-light” speech rating with FIRE, a position held by only 18 other colleges in the country.

Frank LoMonte, executive director of the Student Press Law Center, reviewed the proposal for The Flat Hat. He said that attorney general Eric Holder and education secretary Arne Duncan called for the elimination of zero tolerance policies, noting that they tend to disproportionately punish minority students.

Such zero tolerance policies open minority groups to punitive action — be they liberal or conservative, white or black, religious or secular, racist or activist — while doing little to address bias on campus.

The proper response needs to focus on the victims. The second part of the proposal, the Bias Response Team, does address this problem with its goal of being a “first line of support and information for community members who need care and direction in a time of hurt.” However, we are doubtful that a Bias Response Team would not be at all punitive when the proposal states “a BRT plays a key role in accessing perpetrators of bias not to punish them, but to educate them and ensure additional bias does not continue.”

What forms would this education take? Would they be voluntary or compulsory? Administrators should not be in the business of disciplining students for voicing their opinions, even offensive opinions, unless they constitute harassment or a hate crime.

What does help victims, however, is allowing them to share their experiences in both safe spaces and public forums. While we oppose punitive solutions to bias, we wholeheartedly support the creation of a forum for victims or witnesses of bias. Allowing them to share their experiences and be heard will do more to fight ignorance, promote inclusiveness and protect students than any speech codes.