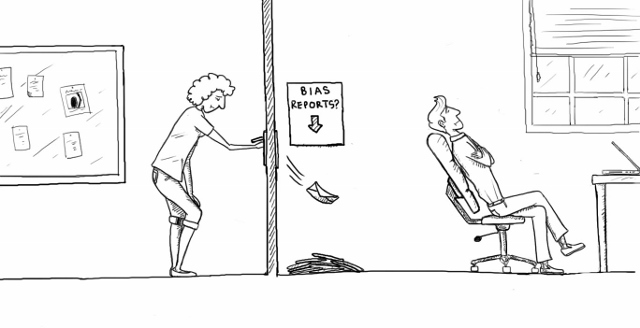 Under the leadership of College President Gene Nichol, the College of William and Mary implemented a Bias-Reporting System in 2007 that allowed members of the College community to anonymously report anyone displaying “hostile behavior” toward an individual based on group traits such as race, gender or sexuality. This system incited protest from free expression advocates opposed to its anonymous reporting and overly broad definition of bias. As a result of the heavy backlash, the College reworked the speech code to reject anonymous reporting and updated the definition of bias to comply with federal anti-harassment laws. With Nichol’s 2010 resignation, the system was discontinued, contributing to the College’s improved reputation for free expression.

February 24th, the Student Assembly senate unanimously passed the One Family Resolution, calling for “the implementation of a Bias Reporting System whereby students can more directly report issues of discrimination and bias in our community with the purpose of providing optional educational resources for students.” While the resolution does well to acknowledge the problematic existence of bias on campus, it does little in the way of offering a serious solution. The resolution fails to outline what the reporting system would look like or how it would operate. The senate did not address the previous, failed system, or whether the new system would be any different.

“The resolution isn’t a space to get into a lot of the technical detail,” Senator Chase Jordan ’15 said. However, the complete lack of detail provided by the senate leaves the nature of the reporting system, and its legality, in question. The resolution does not address anonymous reporting, an issue that plagued the College’s previous system, and which diminished the rights of the accused. By leaving out such a crucial detail, the call for a bias-reporting system seems like it has not been well researched .

Essentially, the resolution has very little substance wrapped up in a great deal of obfuscatory language — language that by our account took nearly a month to write. To simply call for a bias-reporting system without describing how it would operate is poor preparation for establishing an effective solution, especially given how the previous system was assailed by many as unconstitutional. This resolution does not give administrators a basis for how to implement an effective reporting system, which leaves the burden of programming on them. If the senate is unable to answer basic questions asked by a reporter, how will they fare when those same questions are asked by an administrator? Poor research and planning diminishes the senate and trivializes its attempts to address the problem of bias on campus, a goal that is too important to be handled so clumsily.

A month should have been more than enough time to develop a resolution that provides a well-researched and thorough understanding of the ways in which such a bias-reporting system could, and could not, work effectively and legally. The One Family Resolution lacks the strong effort needed to confront bias incidents on campus, one that includes research, creativity and maybe even some technical detail.

Madeline Bielski recused herself from this Staff Editorial.