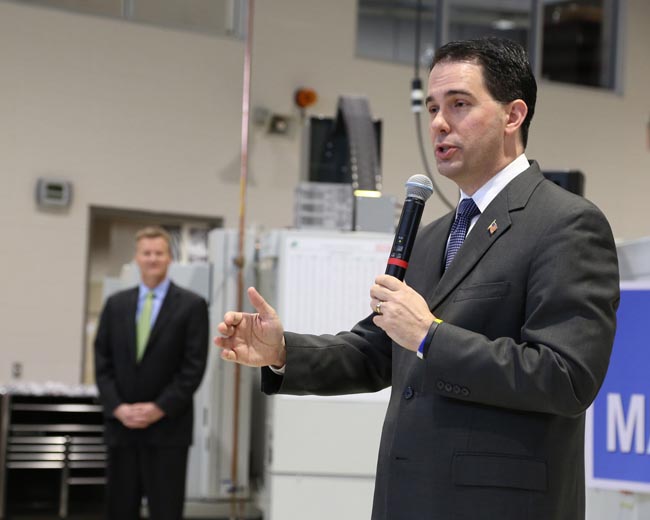 Two high-profile Republican governors have spent the past several weeks pushing for significant state budget cuts for institutions of higher education. Governor Scott Walker of Wisconsin is calling for a $300 million cut to higher education in his state over the next two years. Governor Bobby Jindal aims to reduce Louisiana’s contribution to public universities by $141 million next year. Both men are considering a 2016 presidential run, and their rhetoric could shape how Americans prioritize higher-education spending.

Governors Walker and Jindal are preaching to a nation that has already embraced the doctrine of disinvestment. A 2014 study found that 48 states have yet to return funding for higher education to pre-recession levels. The average state is spending 23 percent less per university student in 2014 than in 2008. As a result, public tuition has ballooned and colleges have been forced to eliminate faculty positions, diminish services and increase class sizes. The burden of paying for college is piled onto the overtaxed student. The consequences: decreasing access to education and increasing personal debt.

The institution of higher education, ostensibly a vehicle for social mobility, is being disassembled by the tinkering of small government proponents. Education and educators are being taken for granted. College is a privilege to be earned, the argument goes, so why should we set aside tax dollars to sustain it? Why should the state provide money to let just anybody go to college? Why shouldn’t college exclusively function as a private enterprise?

Private college is not cheap, and even state schools are becoming increasingly expensive. As states cut funding to public universities, the money available for scholarships and financial aid dwindles. Public school provides a chance for people of disparate economic backgrounds to enjoy the same standard of education. Cutting funding to higher education reinforces socioeconomic inequality and forces Americans to take on more debt to qualify for the same jobs.

Scott Walker has only efficiency on his mind. Along with massive budget cuts, Walker is proposing that Wisconsin transition its public universities to a “public authority” model. Such a model would increase the financial autonomy of state universities, with a set proportion of state revenue going to the schools. The move would placate free-market ideologues and be a big draw for Walker in Republican primaries. However, Governor Walker’s laissez-faire posturing and “go big and go bold” ethos mask the alarming reality of his pseudo-reform. Wisconsin schools would be unable to fully function without state money. Indiscriminate budget cuts degrade the quality of education and demean its providers and recipients.

Unlike Wisconsin, Virginia has already moved to a public authority model. Between 1991 and 2011, the proportion of Virginia revenue devoted to public universities decreased from 27 percent to 15 percent. Colleges are forced to make up the difference by increasing tuition and fees: 23 percent of institutional revenue in 2011 came out of students’ pockets, up from 16 percent in 1991. Only $41 million out of the College of William and Mary’s $300 million budget comes from the Commonwealth of Virginia. This is why, in 2013, the College enacted a 14 percent uptick in student tuition and fees with incremental price increases each year, although tuition is locked in for a student’s four years. The College of William and Mary has adopted novel strategies to keep student costs low, but it must constantly scramble to make up for the state’s stinginess.

The cuts championed by Walker and Jindal are predicated on either apathy or ignorance, and are indicative of a greater shift in views on education. These men assume that education will go on, funding or not. They see teachers as pieces that can be discarded or exchanged rather than as invaluable public resources. They see students as a constant, a common commodity; they assume that students will still cycle through college no matter the cost. This view is disturbingly pervasive and definitively pernicious. Higher education must be reinstated as a priority in order to restore any semblance of social equity.