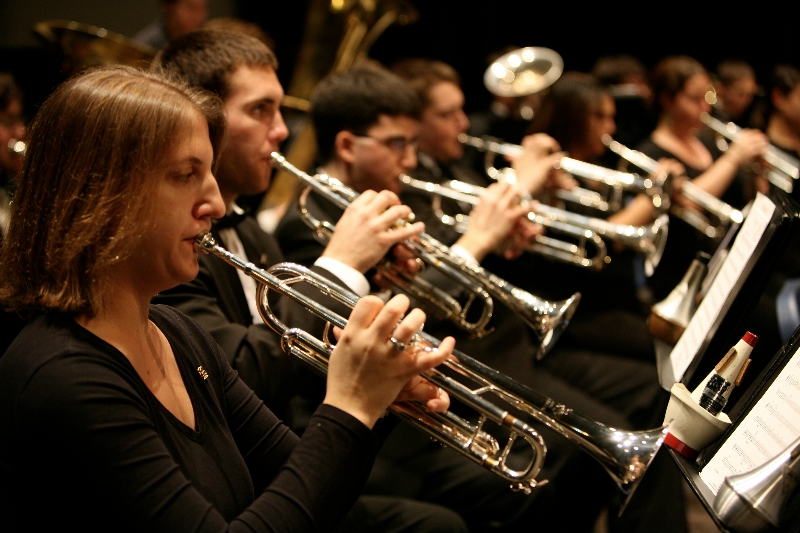 One of the College of William and Mary’s most prestigious music ensembles, the William and Mary Wind Ensemble, a student music group, is preparing to embark on an international tour celebrating its 85th anniversary.

The William and Mary Wind Ensemble was established in 1929 and is currently composed of 53 students. Although it may appear to be like any other musical group on campus, assistant professor of conducting and director of bands, Dr. Paul Bhasin, said the ensemble differs significantly in its structure.

“A wind ensemble takes the brass, percussion and woodwind sections of a traditional symphony orchestra and adds a pair of euphoniums and four saxophones,” Bhasin said. “The sound is very exciting and lush and agile. It plays a lot more music than your average, traditional marches.”

The Wind Ensemble’s flexibility shows in its performances — the songs it plays originate anywhere from the 1500s all the way through the present day.

“A wind ensemble takes the brass, percussion and woodwind sections of a traditional symphony orchestra and adds a pair of euphoniums and four saxophones. The sound is very exciting and lush and agile. It plays a lot more music than your average, traditional marches.”

The William and Mary Wind Ensemble is preparing to take part in a concert at the Kennedy Center and a performance tour of China.

“When the 85th anniversary season was approaching, one of the first things that I wanted to achieve was a real, meaningful and far-reaching kind of a celebration,” Bhasin said. “The reason is so that students can experience performing opportunities that bring them a little bit out of their comfort zone of being on campus.”

In order to make this tour of China possible, the Wind Ensemble partnered with the U.S.-China Cultural and Educational Foundation, a non-profit institution that helps to facilitate musical and educational partnerships between Chinese and American institutions and universities. The foundation helped to produce and structure the China tour.

“The process is usually that we send our materials to them — recordings — and they review them,” Bhasin said. “They need to vet our performance ability and the kinds of music we might be playing. There is this review process that would precede their choosing us to collaborate with. The process took about two months.”

The review process is critical partly because the U.S.-China Cultural and Educational Foundation heavily subsidizes the cost of each student’s participation in the tour.

“That subsidy is an attractive option for many universities in the U.S., but what makes it exciting for William and Mary is that it isn’t very often that a liberal arts university would be selected for that kind of a project,” Bhasin said. “The reason is that it is more common for a school of music or a conservatory, where there are many professional music degrees that commonly prepare students for a professional career in music.”

The tour will also give the Wind Ensemble an opportunity to interact with and perform for a local, countryside elementary school in Beijing. Noah Baker ’15, a tour director and trombonist with the ensemble, said he was looking forward to this opportunity to share his love of music with other students.

“I’m excited to [be] sharing our music, and share our name, and also to inspire students to play,” Baker said.

One of the biggest obstacles the Wind Ensemble’s planned tour of China faced was the cost. After many months of planning and strategizing, the ensemble tapped into a number of funding sources.

Much of the group’s financial aid came from inside the College. Bhasin was selected as one of the Wendy and Emery Reves Center for International Studies’ Faculty Fellows — a yearly fellowship accompanied by funding which Bhasin used to support tour-related costs. Every student performing in China with the Wind Ensemble will receive academic credit through a program put in place by the Reves Center.

The Wind Ensemble has also received money from the Confucius Institute at the College, as well as their extensive donor and alumni base, including the Alumni Band Organization, which has helped to raise several student scholarships.

Proceeds from the upcoming concert at the Kennedy Center will go toward the tour. President of the Wind Ensemble Lucy King ’15 said that she is honored to have the opportunity to play at such a renowned venue.

“I’m so thrilled that we get the opportunity to play at the Kennedy Center,” King said. “We’ve got people supporting us so that actually every ticket that we sell goes directly to support student scholarships towards our China Tour. I mean, playing the Kennedy Center itself is a huge thing and a great opportunity for any musician, and the fact that we get to play it, and also at the same time know that everyone in attendance is helping to support our trip to China is just an incredibly exciting opportunity.”

The ensemble has been preparing for its upcoming performances for the better part of this semester. The group rehearses five hours a week. According to Bhasin, the songs chosen for the tour were specifically selected to include several pieces of American music.

“For the China tour, it has been requested that we perform some popular music from American films, so we will be playing some John Williams works from Jurassic Park and Superman,” Bhasin said. “We will also be playing some traditional Sousa marches. The Chinese audiences really love hearing that American music played by American ensembles.”

The set also includes an exciting original piece commissioned and composed specifically for the William and Mary Wind Ensemble and David Vonderheide, a lecturer of trumpet at the College and principal trumpeter of the Virginia Symphony, who will be accompanying the Wind Ensemble on their tour of China for several solo and collaborative performances. The piece, entitled “Margins Afterwards,” was composed by Brian Hulse, an associate professor of music theory and composition at the College. “Margins Afterwards” will premier at the Kennedy Center, and its performance in China will be the piece’s Asian debut.

Vice-President of the Ensemble, Megan Haney-Claus ’16, credits much of the group’s success to the camaraderie of its members.

“I definitely knew going into college that I wanted to be involved in a musical group,” Haney-Claus said. “The Wind Ensemble has become my major friend group. Even though I’m not involved musically in my major or a minor, I probably spend most of my time in Ewell because it’s just allowed me to meet so many awesome people. I’ve really, really enjoyed it. It’s been everything that I’ve wanted.”

Baker also said that the family atmosphere of the group is what makes them strong.

“As a Wind Ensemble, we’re not only a curricular course, we’re also a student organization, and within that organization, we have a very strong tie to each other,” Baker said. “We see each other as a family.”