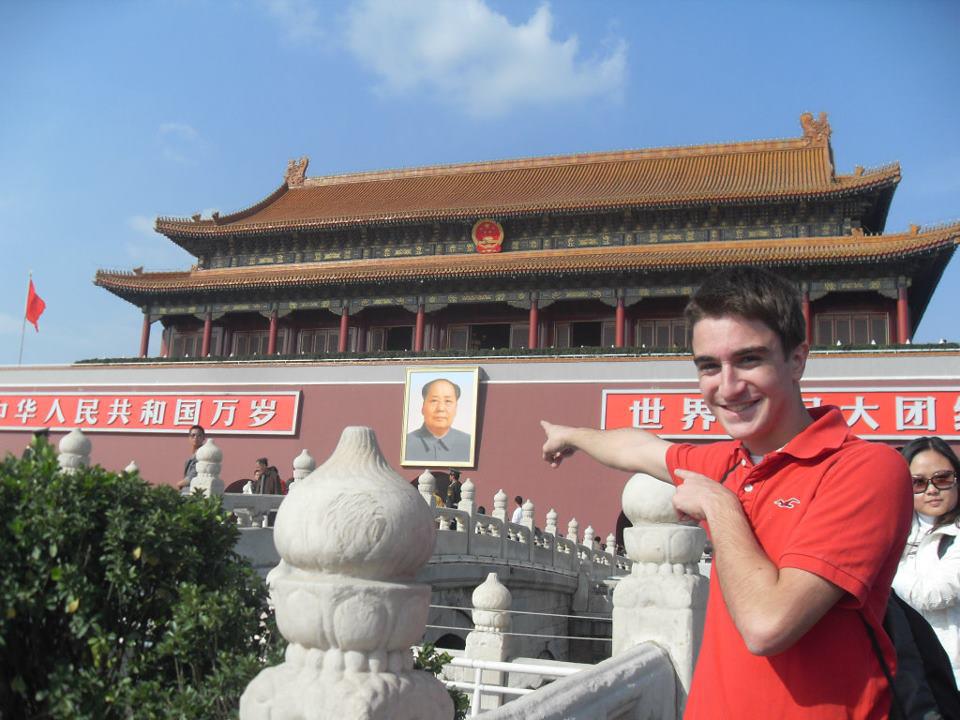 “People always talk about China rising but it has such a long and interesting history. Sure it’s rising, but they’re trying to learn how to rise while maintaining their cultural identity.” Tyler Brent ‘15, a freshman here at the College, regaled me about his gap year last year in China.

Tyler has always wanted to go to another country and learn another language because, as he says, “I come from a monolingual, white home in America; just being able to go to China for me was absolutely amazing.” His initial choice was Egypt to study Arabic. But with a twist of fate: lack of permission from his parents to visit a Middle Eastern country due to security reasons, he ended up in China thanks to the national security language initiative for youth scholarship presented to him by the department of state! Spending ten months in China, Tyler says he has become “inexplicably tied” to it. “I grew to love the language and culture; I even call my host family my Chinese family because I grew really close to them.”

Beijing Duck is China’s most popular and prominent dish. For the sweet-tooths out there, bubble tea and mooncakes promise an exquisite kick to the taste buds. China also has a street vending culture. In fact, “My personal favorite dish would have to be this stuffed pancake liked dish called “Bing.” It was crispy and crunchy; if I ever went back to China, I’d buy like 10” said Tyler. Sport-wise, the Chinese love basketball. A lot of NBA players will go to China for the job opportunities. “It’s also very commonly played in schools” said Tyler.

The best part about his trip to was the way he was able to learn another language fluently as he said “I loved the opportunity to speak Chinese daily, live with it and use it as a survival tool.” He did, however, admit to the ever-expected homesickness, “Being 7,000 miles away from home was hard. It’s not like you can just get your cell phone and call your parents or send them a text whenever you want due to the governments’ censorship. I would have to Skype them at 2 AM which was sometimes hard since I would be disturbing people trying to sleep.” He also commented on the idea of being trapped because only about four people in the city of 10 Million could speak English fluently.

His favorite place in China was Beijing. He loved how it was modern and yet very traditional at the same time. “It exists beautifully with its dichotomy. And if I ever missed foreign food, like Starbucks or Outback, I would go to Beijing since it was only two hours away from the city I was staying in” said Tyler. One place Tyler recommends you go is Tiananmen square, “although it’s very cliché, it was still wonderful. I thought it was cooler than the Great Wall.”

Although Tyler is an excellent Chinese speaker, he admits to the fact that it was initially very hard and frustrating. “I would see pages of Chinese writing and be in awe of how cool it looked, then I would look at my poor skills and become frustrated with how long it was taking to learn” said Tyler. He would take Chinese language classes for three hours a day, five days a week. However, he did say that hearing it 24/7 made the process much more interesting and it was about the beauty of being in China-since learning Chinese then became a necessity. An interesting fact that Tyler learned about the Chinese language was, that during Mao’s rule, he wanted to improve literacy rates and in order to do this he created the simplified version of Chinese writing. “So for example, if a character in traditional script is 64 strokes, in simple it might be like 10” said Tyler. It’s interesting to note this because one man changed the language of almost a billion people in around ten years.

China is modernizing and learning English has become mandatory. Tyler, however, stated that their listening and speaking abilities aren’t very good and this is because there aren’t many foreigners in China so they don’t have the chance to practice it as much as someone would in, for example, Germany. China’s rise is also, in a way, juxtaposed with its culture and history as Confucius once said, “You should be modest and hold back.” How this relates to China is that it raises the question if it will actually take charge and become a superpower or will it stick to its ancient cultural traditions.

Also: Tyler Brent is writing a book about his trip. If anyone would like to help out or give him some suggestions, contact him at wtbrent@email.wm.edu!