Home Sports Men’s basketball: Season comes to a close with 57-49 loss to Northeastern 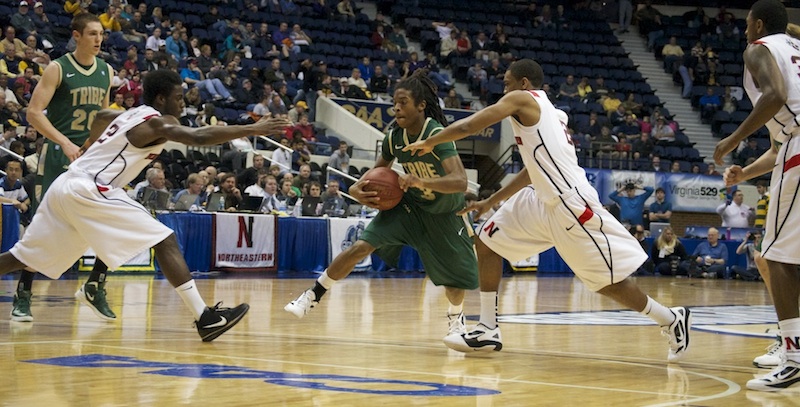 A disappointing season came to a disappointing end Friday, as William and Mary lost 57-49 to Northeastern in the opening round of the CAA tournament in Richmond. The loss marks the end of the playing careers of Tribe seniors Kendrix Brown (guard), JohnMark Ludwick (center), and Quinn McDowell (forward).

Head Coach Tony Shaver had to like the first-round draw, having blown out the Huskies by 25 in their Feb. 11 matchup at Kaplan Arena, in what was easily his team’s best performance all season. The College shot an efficient 49 percent in that game, on its way to a season-high 79 points. But, it was evident from the tip that things wouldn’t be so easy for the Tribe this time around. A feisty Northeastern defense kept the Tribe off balance for much of the game, as the College shot just 39 percent from the field, and never did find its rhythm offensively. (More after the slideshow).

Some of the sloppy execution had to do with sophomore point guard Brandon Britt watching most of the game from the bench. Britt, who torched the Huskies for 24 points in their meeting at the College, played just 11 minutes after picking up his fourth foul early in the second half. Conversely, Northeastern started the second half on fire, burying four consecutive threes en route to a 12-point lead.  The College answered, with Sophomore guard Julian Boatner swishing two threes, and McDowell contributing a fast break layup of his own to cut the lead to three with six minutes remaining. But that was the closest McDowell and company would get, as the Huskies corralled offensive rebounds at will to run clock and stymie the comeback. Northeastern’s dominance on the glass was the decisive factor in the game, as they outrebounded the Tribe 42-28. Also key to their victory was the more than three-fold disparity in free throws, with the Huskies shooting 33 (20 for 33), to just ten (5 of 10) for the Tribe.

“[Those] two statistics were glaring,” Shaver said. “We thought [those] would be a real key.” (More after the video).

The bitter disappointment was compounded for McDowell, who managed just six points on 3-10 shooting in his finale. Reflecting on a season of underachievement for the team, and dealing with the finality of playing in his last college basketball game, an emotional McDowell struggled to come to terms with the end of an outstanding career at the College.

“It’s difficult to believe it’s over,” he said. “In terms of wins and losses, my career’s not gone exactly as I’d envisioned it, especially this season. Coming into the year we had such high expectations of ourselves, and we just didn’t live up to [them].”

While it’s easy to understand McDowell’s disappointment with his team’s unfulfilled potential, there is nothing disappointing about the exemplary career of the Ohio native. The consummate student athlete, McDowell has compiled a resume that includes being a three-time All-CAA performer, as well as being named multiple times to the CAA’s All-Academic team. He is also a two-time recipient of the CAA’s Dean Ehlers Leadership Award, the top honor given to student-athletes in the conference. He came into the season the College’s all-time leader in three-point field goal percentage at 43 percent, and was 16th all-time in scoring.  Despite all of these individual achievements, the two-time team captain chose to reflect on his relationship with teammates as being most meaningful.

“There’s not a group of guys I would’ve rather gone through this year with,” he said. “[They’re] what’s made the last four years special.”

Shaver spoke to the impact of McDowell on the College’s basketball program, saying he’s seen few like him in his more than three decades as a coach.

“Quinn’s one of the more special people I’ve been around,” he said. “He’s made as great an impact as anybody I’ve seen in my 35 years of coaching.”