The Student Assembly Senate passed the Closing of Session Act during its meeting Tuesday evening and introduced a new resolution.

Chairman of the Senate Daniel Ackerman ’16, the Closing of Session Act’s sponsor, reminded senators of the bill’s importance.

“This is a pretty standard bill that happens every year,” Ackerman said. “It isn’t just a tradition. It’s necessary to continue certain programs from the last session of the Student Assembly and to help us get rolling with the new session.”

After the friendly amendment, three bills will be carried over to the 323rd session: the No H8 Campaign Act, the Medical Amnesty Reform Resolution and the Mental Health Awareness Act.

The Closing of Session Act passed by unanimous consent.

Sen. Peter Quinn-Jacobs M.A. ’18, J.D. ’18 introduced the Non-Discrimination in the Workforce Resolution. The resolution calls on the Williamsburg City Council to create a policy that protects public and private sector employees from workplace discrimination based on sexual orientation and gender identity and expression, as well as other forms of discrimination.

The resolution recognizes that College of William and Mary students are members of the greater Williamsburg community and must exercise their influence for positive change in Williamsburg.

William and Larry, a student LGBTQ advocacy organization, inspired the resolution through its discussions with the City Council regarding a non-discrimination policy.

“I think that if [the non-discrimination policy] had the support of the Student Assembly, it would be symbolically important to show that the College is behind this,” Quinn-Jacobs said.

Ackerman assigned the bill to the policy and public affairs committees.

HOWM, a part of the SA Department of Diversity Initiatives, updated the senate about the success of the Humans of William and Mary Experience Act. The bill allocated funding toward the building of a physical art installation for Admitted Students Day featuring HOWM photographs.

“Overall, there was a huge positive response to it,” Stephanie Faucher ’16 said. “We were supposed to only have it up through Tuesday, but people wanted to have it up longer… It became a really important space for people for expression, as an outlet for their emotions.”

Phoebe Galt ’17, who accompanied Faucher, asked for help from the senate to reach out to the administration to find a permanent place for student expression. A new Wellness Center, outlined in the College Master Plan, will feature an expression wall, but it will not be built for several more years.

During the meeting, Ackerman asked for nominations for the informal election of the position of historian of the senate. He did not receive any nominations, so he appointed Sen. Alaina Shreves ’18 to the position.

The historian is charged with tracking changes in the SA’s Code and Constitution, as well as keeping records of major changes in the senate during the session. Sen. Eboni Brown ’17 held the position last session. 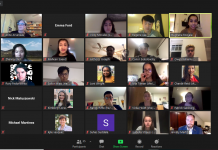