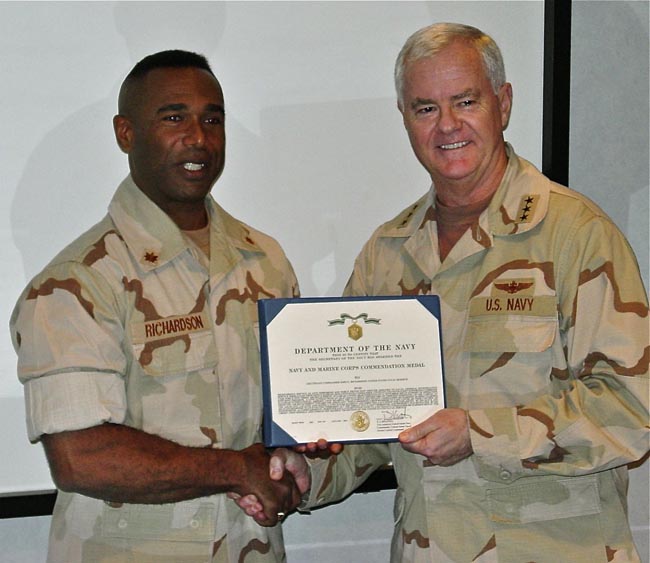 I am part of the long line of “citizen-soldiers” descended from the College of William and Mary, dating back to 1777, and the founding of the College Company, to today’s most junior cadets in the Reserve Officer Training Corps. I left Compton, California in 1981 to enlist in the U.S. Air Force. In 1992, after serving at the National Security Agency as a Korean linguist (1983-1987) and as a Signals Intelligence Analyst and Assistant U.S. Delegate to the North Atlantic Treaty Organization (1989-1992), I received an honorable discharge to become a full-time graduate student at the College of William and Mary. Shortly after completing my master’s thesis in 1994, I was commissioned as an intelligence officer in the U.S. Navy.

I have tried to model my career as a “citizen-soldier” after Thomas Jefferson‘s concept of “public virtue.” If Jefferson’s public virtue is truly essential to the life of a healthy republic, then I believe integrity — the active practice of decision-making based on individual sacrifice for the greater good — is the means to achieve this. In a military context, this could ultimately mean risking one’s life. I can assure you, like many other veterans, I have lived this risk to the point of being decorated “for courage under fire.” Some who know my story have called me a “war hero,” but today, I am the “perfect storm” or “poster example” of the difficulties our veteran population faces in attempting to return home. My very life and spirit and my family’s legacy of service to our nation are actively under attack by the government I have served.

My very life and spirit and my family’s legacy of service to our nation are actively under attack by the government I have served.

History tells us that our national security agencies knew of a significant terror plot before the attacks of September 11, 2001. In fact, I was in the Middle East from February through September of that year as an “intelligence operative” helping to provide security for U.S. military personnel and our host nation. This was the first of my five combat/hazardous duty deployments. My last deployment was in September 2010. At age 54, I was the oldest officer in my group. I suffered a catastrophic back injury from the weight of the body armor I wore during three weeks of pre-deployment combat training but, despite my injury and crippling lower back pain, I completed my deployment to East Africa and was selected for a promotion to commander.

When I returned stateside in 2011, I initially refused my Navy doctors’ admonishments to retire, but when I was told my presence in any combat/hazardous duty zone would place others at risk, I reluctantly accepted medical retirement on the Temporary Disability Retirement List (TDRL) — a program the Recovering Warrior Task Force asked Congress to eliminate. Because Navy regulations state any member on TDRL cannot be promoted, my hard earned promotion to Commander was rescinded. Taking back my promotion not only added literal insult to my injury, but also deprived my family of significant retirement income.

Yes, after 30 years of honorable service, I was fired for being a wounded warrior. This was my last official “thank you for your service” moment.

In September 2012, after a year of medical rehabilitation, I was honorably discharged as a “wounded warrior,” returning to my federal job at the Department of Homeland Security, Customs and Border Protection, Internal Affairs. Because my injury prevents me from sitting or standing for extended periods of time, I requested a simple job transfer to a non-sedentary job. Not only did agency officials deny my request, a few months later I was forced out of my position and later officially terminated. Yes, after 30 years of honorable service, I was fired for being a wounded warrior. This was my last official “thank you for your service” moment.

The trauma my family and I continue to suffer at the hands of our own government is stranger than fiction and beyond comprehension, but it is real and quite commonplace. The heinous nature of what has been done to me is only exceeded by the voluminous materials I have collected to document it.  I have reported my circumstances to every relevant oversight agency and numerous members of Congress, yet I remain in this “perfect storm” of bureaucratic red tape. I am a “poster example” of a disabled veteran left behind, unable to fully return home.

If you are considering serving our nation’s military, I urge you to take action now to ensure this does not happened to you by demanding change now. You are “the alma mater of a nation” and there is nothing more powerful than enlightened youth.